Since our first grade students did such a great job acting and playing their musical theme from, "Peter and the Wolf," Mrs. Rzasa and I decided to tape each class's performance. Please CLICK HERE to watch your child's performance. During the second music class, the first graders learned about form. A musical form refers to the structure or layout of a musical piece. We focused on ABA form, where the A section is completely different from the B section. Each class created their own ABA form using du, du-de, and rest. Each section was 8 measures long. We then extended this activity by adding a body percussion to represent du, du-de, and rest

The second grade students continued exploring with Boomwhackers this week! Students got into small groups of 4 and composed a song using their Boomwhackers. Students were instructed to either strike the Boomwhacker on the floor, on their hand, on their back or on their foot. It was nice to see and hear all the creativity and musicality.


The third graders have continued to work on learning patriotic songs for their upcoming Flag Day assembly!  They reviewed our partner song, "You're A Grand Old Flag," and finished learning "Red White and Blue." We had a new game at one of our centers called, "Haydn Seek." Ask your child what this fun game is all about!

Congratulations again to our wonderful 4th and 5th grade students for an AMAZING concert last Thursday! Students got a chance to reflect their performance as we watched the band and chorus perform.

We hope you have a wonderful L-O-N-G weekend! We would like to take a moment to remember all the men and women who died serving our country. THANK YOU!

We want to cheer so loud that everyone hears us
When we see you on display.
You're the spirit of hope and liberty;
You make us feel like shouting "Hooray!"
Red white and blue, we pledge allegiance to you;
We love the colors of the U.S.A
Waving proud and free for all the world to see,
You will always lead the way!


You're a grand old flag, you're a high flying flag,
And forever and in peace may you wave.
You're the emblem of the land we love;
The home of the free and the brave.
Every heart beats true for the red, white and blue
And there's never a boast or brag.
Should old acquaintance be forgot
Keep your eyes on that grand old flag!


**Third Time- Sing both verses together as a partner song.


Our Red, White and Blue

Ooh...
Fifty stars on a field of blue.
Thirteen stripes for the colonies who
set out to build a great nation,
with fairness and justice and truth

Fifty stars represent our nation.
One for each of our great states.
Seven red and six pure white stripes.
They are on our flag to remind us
of our strong resolve to be free!


Fifty stars on a field of blue.
Thirteen stripes for the colonies who
set out to build a great nation,
with fairness and justice and truth

Fifty stars on a field of blue.
Thirteen stripes for the colonies who
set out to build a great nation,
with fairness and justice and truth

That's our red, white and blue.

Peter and the Wolf

The first grade students have been working in groups on a fun project!  They were each assigned to a different character from "Peter and the Wolf" (Peter, Grandpa, Bird, Duck, Cat, Wolf, or Hunters), and selected a percussion instrument to represent their character.

Just like in Prokofiev's composition, each character had a musical theme.  The students composed a four beat pattern on their selected percussion instrument as the theme for their character.  To complete the activity, we read the book and the students played their theme each time their character was mentioned, as the other group members acted out the story!

Please check out our videos of the performances below!

Email ThisBlogThis!Share to TwitterShare to FacebookShare to Pinterest
Labels: 1st grade, class of 2018

Just popping in to share a quick video from the 5th graders! They were experimenting on Boomwhackers this morning:

Here are the compositions from Mrs. Siegel and Mrs. Nelson's class. Each class composed their own song. Students got into groups of 2-3 and put lyrics to their compositions. Enjoy!

We had such an amazing week in music!

The first grade students worked in groups on a fun project.  They were each assigned to a different character from Peter and the Wolf (Peter, Grandpa, Bird, Duck, Cat, Wolf, or Hunters), and selected a percussion instrument to represent their character.  Just like in Prokofiev's composition, each character had a musical theme.  The students composed a four beat pattern on their selected percussion instrument as the theme for their character.  To complete the activity, we read the book and the students played their theme each time their character was mentioned, as the other group members acted out the story!

The second grade students learned about the Boomwhackers this week!  Boomwhackers are a set of colorful plastic tubes which produce a different pitch when struck.

The longest tube (with the lowest pitch) is C, and then the pitches ascend through the musical diatonic scale up to the smallest tube, high C.  We took turns playing the Boomwhackers, then even played some familiar songs such as "Mary Had a Little Lamb" and "Twinkle, Twinkle Little Star!"

The third graders have continued to work on learning patriotic songs for their upcoming Flag Day assembly!  They reviewed our partner song, "You're A Grand Old Flag," and have started "Red White and Blue." It is so much fun to sing songs about our flag and country!  The students also enjoyed their centers day, and continued to test for their recorder belts.

The fourth and fifth graders worked extremely hard this week, rehearsing for their Spring Concert!!  The concert was on Thursday night, and they did such an incredible job!! We are so proud of them!  For those of you not in attendance, they performed the "Songs of the Sea." Mrs. Dressler wrote a lovely post about their morning concert, and you can read all about it HERE! :)

Good afternoon!  Just popping in to share a photo of the second graders today, learning all about the Boomwhackers!! 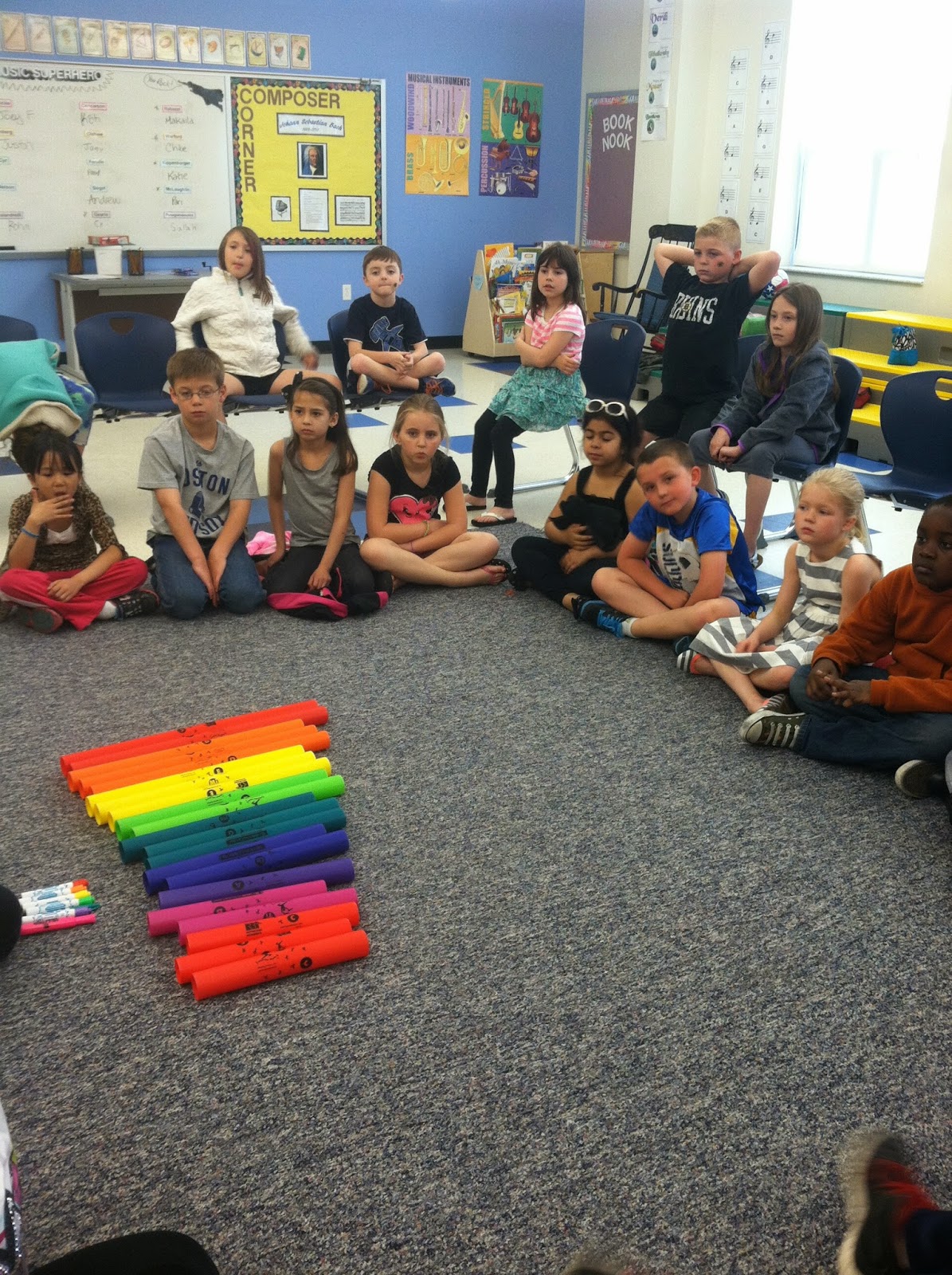 
We can't believe it's May already.  Don't forget that the Spring Concert is next Thursday, May 15th at 7pm! The 4th and 5th graders have been working so hard towards this performance. We hope to see you all there!

The first grade students continued the activity "Walk to the House," since many of them did not get a chance to play a percussion instrument. As Mrs. Rzasa and I were bringing the instruments out, we tested their memory. We were so happy that these amazing first graders remembered some difficult names such as cabasa and agogo bells.  We also began our "Peter and the Wolf" composing and acting unit. We made 7 groups, each representing a character from the book. We assigned each student a group and gave them the opportunity to pick a percussion instrument that would represent their character. Next week, students will compose a four beat pattern with their instrument and act out their parts. We can't wait to see and hear what our first graders will come up with!

The second graders continued their group compositions that went along with their  class melody.  The students needed to make sure that they matched the syllables of each word to the rhythm of the song. These second graders came up with some hilarious songs! Mrs. Rzasa and I taped their songs and will be putting them on the block next week so stay tuned!

The third grade students are now beginning to prepare for their concert in June. We went over the belts songs all the way to brown belt. Students are required to perform up to the belt that they have passed and are highly encouraged to memorize the songs! We also began learning the partner song that they will be singing at the concert, "We Want to Cheer!" One of the partner song is very popular and you will probably recognize the tune. If we want a sneek preview, feel free to ask your child! As a reminder:

The Third Grade Patriotic/Recorders/Violin concert will be
Tuesday, June 10th
at 8:45am

Fourth and fifth grade had their individual grade level rehearsals and one combined rehearsal. Mrs. Rzasa and I want to say that we were so happy that we had a successful first combined rehearsal on Friday! Thank you for working so hard to memorize your lyrics. If you still are not quite sure of some of the words, you still have time! If you have solo and speaking parts, please make sure you MEMORIZE them! We will be holding extra rehearsals next week. They are as follows:

Wow!  We had an AMAZING first ensemble rehearsal today for violin!!  All of the students in the third grade violin program attended during recess (such dedication!) and we had an amazing time. 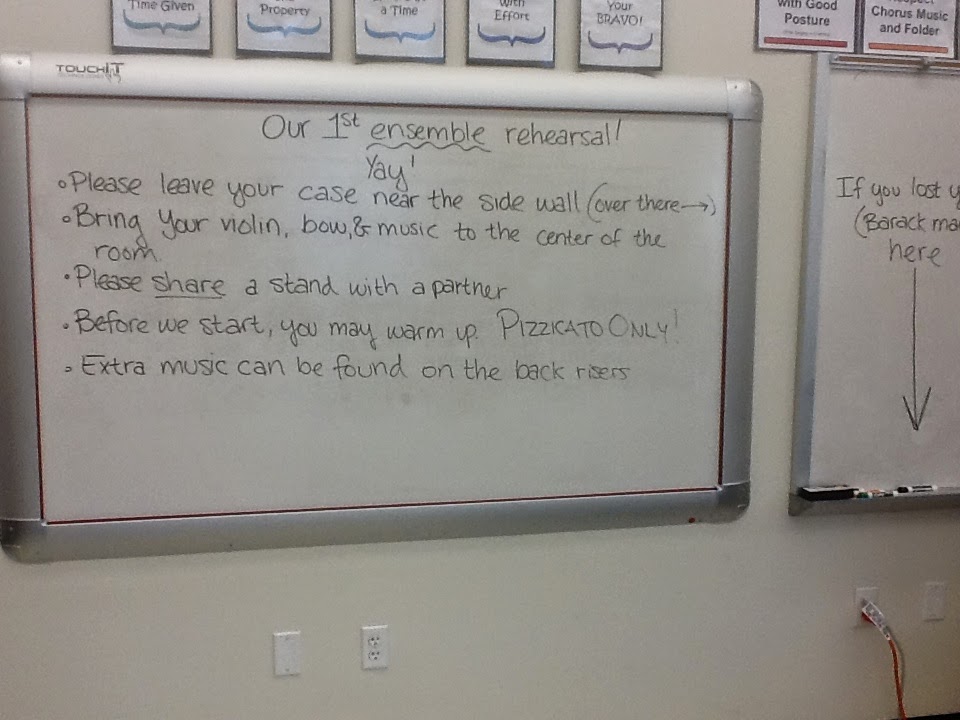 We started rehearsal with some D scale warm-ups.  They sounded SO good that I am considering incorporating them into our performance in June!  We then ran through "Song for Christine," "Frere Jacques," "Buckeye Salute," and "Mozart Melody."   It was great to hear all of the students playing at once...they have such a strong sound!

We also had some time to start working on "Oh, Susanna."  The grace notes are pretty tricky!!  The more we practice and rehearse, the better it will get!

Everybody enjoyed playing today. Here are the happy students ready to go back up to class! 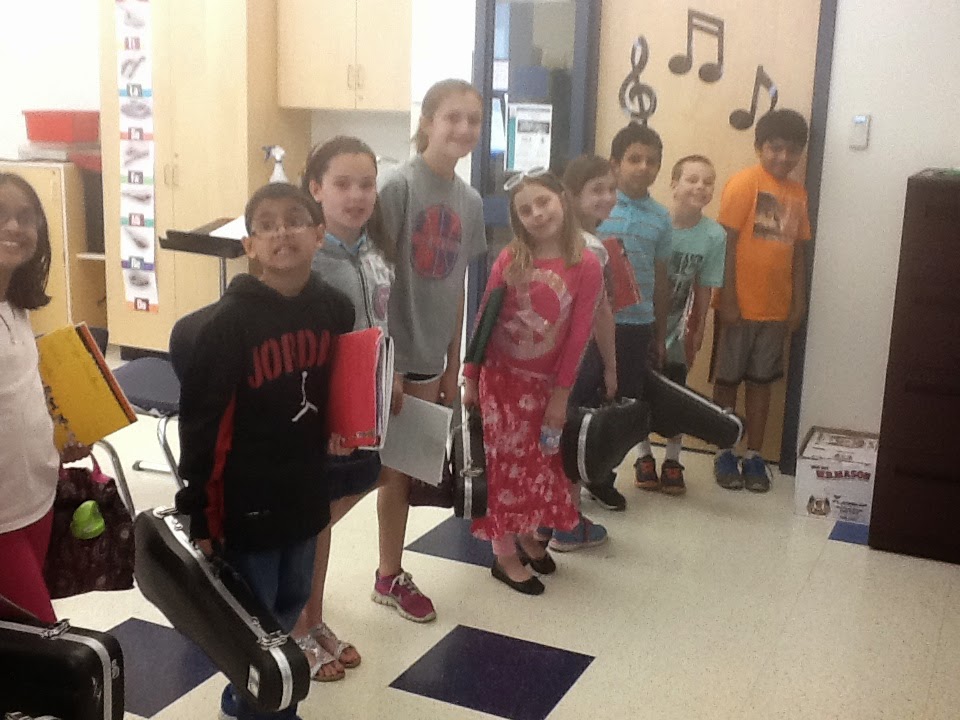 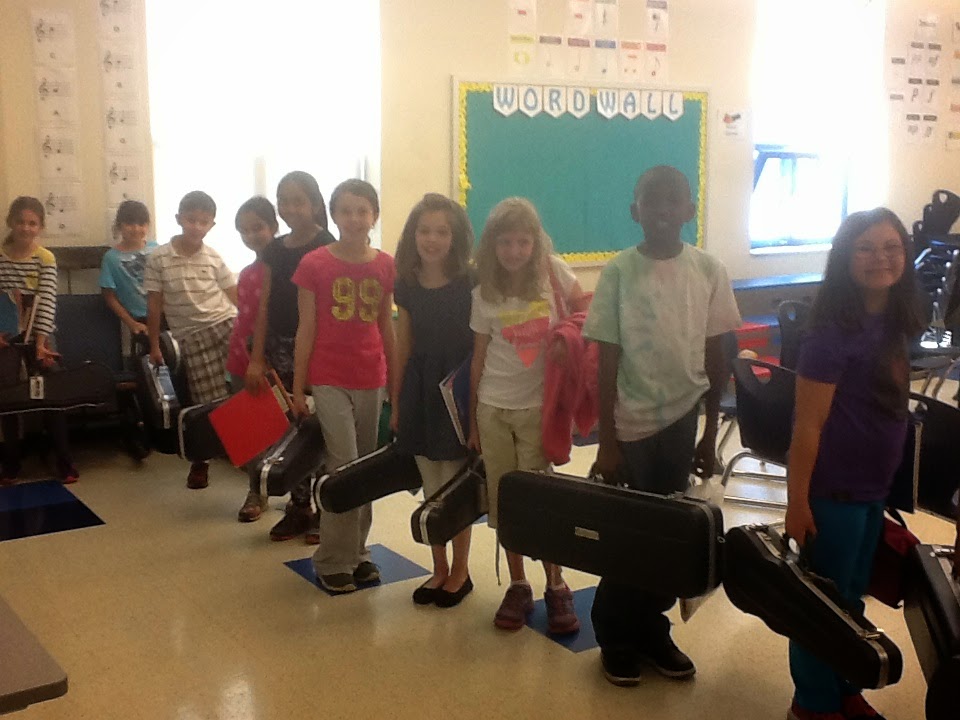 Before we get to our weekly review,  I want to congratulate the 5th graders on winning an awesome volleyball game against the teachers this morning!  Such a great way to start our Friday!

This week, the first grade students discussed the instruments of the orchestra and watched a video about the Carnival of the Animals.  The Carnival of the Animals is a series of short musical pieces by French composer Camille Saint-Saëns.  Each part is about a different animal, and features a different instrument of the orchestra.  It was fun to watch the musicians playing their instruments among the animals in the video!  They also learned a new song called "Walk to the House."  The song corresponds to a percussion instrument guessing game.   We had a lot of fun!

The second graders started a class composition.  Mrs. Niu and I drew a staff on the board, and each student had the opportunity to contribute either a rhythm (such as quarter note, eighth note, or rest) or a pitch (A-G).  Once everyone in the class had added something to our song, we sang it together!  For the second class of the week, the students got into groups of two or three and composed lyrics to go with their class melody.  The students needed to make sure that they matched the syllables of each word to the rhythm of the song.

The third grade students enjoyed their music centers this week!  They also played JoyTunes, and worked on "Old MacDonald" and "Twinkle, Twinkle, Little Star."  Some students even had the opportunity to lead the recorder warm-ups!

Note to parents:
The Third Grade Patriotic/Recorders/Violin concert will be
Tuesday, June 10th

Fourth and fifth grade students learned percussion parts for two of our chorus songs.  We are continuing to prepare for our upcoming concert - on Thursday, May 15th.  Flyers will be going home today!
Posted by Mrs. Rzasa at 8:19 AM No comments: