Third Graders
Today, we practiced reading music on the staff, and identifying each note.  Sometimes it's tricky to get them right away- working on it at home will help you memorize the notes!  We played through Jingle Bells, one measure at a time, then tried to do the whole thing.  The students did an excellent job- ask them to play it for you at home!


Fourth Graders
4A:  Today the students played Jingle Bells with the bow!  The 4th grade beginners are starting to catch up with the other 4th grade students, which is awesome.  :)

Assignment:
4B:  For fun, we read through a new song- Deck the Halls. It was a lot of fun!  The students played part A in the lesson.

Assignment:
We will start music for our Spring concert when we get back from break!

(Thank you Paul for videotaping while I played piano!)

The first graders enjoyed dancing and moving to the March, from Tchaikovsky's Nutcracker ballet.  We were so excited to see that they remembered the music to each of the different themes!

The second grade students finished watching the New York City Ballet's rendition of The Nutcracker.   They really enjoyed visiting the Land of Sweets and seeing the different types of dancing.  So many fun styles!

The third graders reviewed parts of speech (verb, noun, and adjective) with some Musical Mad Libs!  Without seeing the song first, students selected words and we plugged them into the song.  When the final lyrics were revealed, we had a great time singing them- they are so funny!  You can read some of their lyrics here.

The fourth and fifth graders celebrated the completion of their Winter Concert by enjoying some time outside!

All students did some winter caroling this week!  We have talked to them about the wonderful tradition of caroling, and how it brings the community together in song.   Please check back soon for some photos and videos, and a big thank you to the parents to took the time to come to the school and join us!

We hope you have a safe and lovely Winter break!
Posted by Mrs. Rzasa at 8:21 AM No comments:

This week, the students are caroling in the hallways during their second music class of the week- parents are welcome to join us and sing along!  We have talked to the students about the wonderful tradition of caroling, and how it brings the community together in song.  They would really love to hear their loved ones singing with them!


Here are some of the highlights from today: 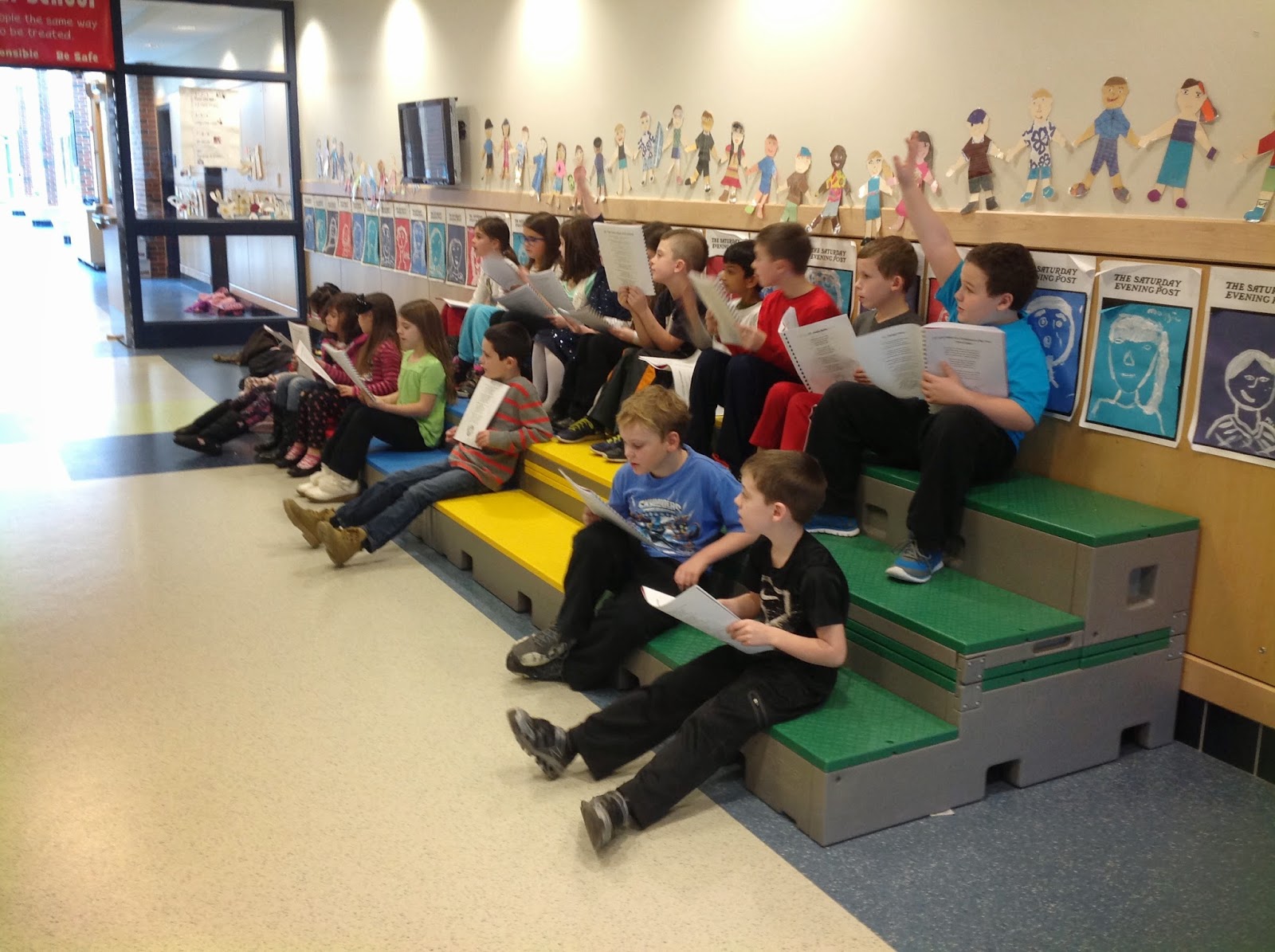 
Below are the silly and creative songs that Mrs. Ferullo and Mrs. Cyr's class wrote by doing Mad Libs!

Then one foggy Christmas Eve
Santa came to say
Rudolph with your digestive system so fat
Won't you guide my George Washington tonight?

Then all the kittens loved him
And they shouted out with obsession
Mrs. Niu the pink-head pig
You'll go down in history!


Frosty the Barack Obama man
Was a furry colorful brown soul,
With a Hawaiian Pizza and a heart foot
And two eyes made out of chicken.
Frosty the Bach man is a blue tale, they say,
He was made of bathroom but the children know
How he came to  New York one day.
There must have been some magic in that
Old pants they found.
For when they placed it on his head
He began to play around.
Oh, Frosty the  Angel man
Was alive as he could be,
And the classes say he could ski and jump
Just the same as Ava and me.

I want to extend an extra Congratulations to all 4th Grade String students for such a wonderful performance last week!  I am so proud of you and all of your hard work :)

Third Graders
Today, we continued to review all notes on the D and A strings, then played through page 13.  By now, students should have each of those notes memorized - not only the fingerings, but also what they look like on the staff.  If your child is having trouble with this, remind them that they can go back to the earlier pages in the book to review.  If it is still difficult, please let me know so I can give them extra help in school!  Thanks.

Fourth Graders
4A:  Today we had (a belated) Performance Day!!

4B:  Today we had (a belated) Performance Day!

It was a BIG week for our talented 4th and 5th grade students! They did an AMAZING job performing at the Winter Concert on Wednesday. Congratulations!!!! Mrs. Rzasa and I are very proud of you all!


Once again, we will be singing in the hallway in front of the cafeteria to bring in the holiday spirit on Dec. 17th, 18th, and 19th!  Feel free to join us! Your child will be singing with his/her class during their music class. Here are the dates and times:

Our 1st grade students listened to the "March" from the Nutcracker ballet. We discovered that there are three main themes to this suite and danced to it. The themes were soldiers, puppets, and mice because of how they sound. We had so much fun dancing like and to these themes.

In second grade , we watched a video of "The Nutcracker." It was performed by the New York City Ballet.  The students now know that in a ballet, the story is conveyed through dance and movement instead of through spoken words.  The only voice you hear is the narrator, who occasionally speaks to give extra details about the story.

The third graders reviewed music notation on their IPAD and learned a fun song to help remember the name of the notes. Ask your child to sing the song for you!  Our recorder unit is coming up! Mrs. Rzasa and I sent home information about the recorder and the Lexington Symphony Field Trip. Please feel free to contact us if you have any questions! The third graders also learned a fun dance during the holiday season called the "Jingle Bell Mixer." Here are the performances:

In fourth and fifth grade, we watched a video of the concert in class and assessed the performance.  It is always beneficial for musicians to discuss how they did individually, and how they did as an ensemble.  It helps them to develop better musicianship.

Have a wonderful weekend!!!

The third grade students have been learning how to read music notation, and they practiced drawing the staff, treble clef, time signature, bar lines, measures, double bar, and repeat sign!! 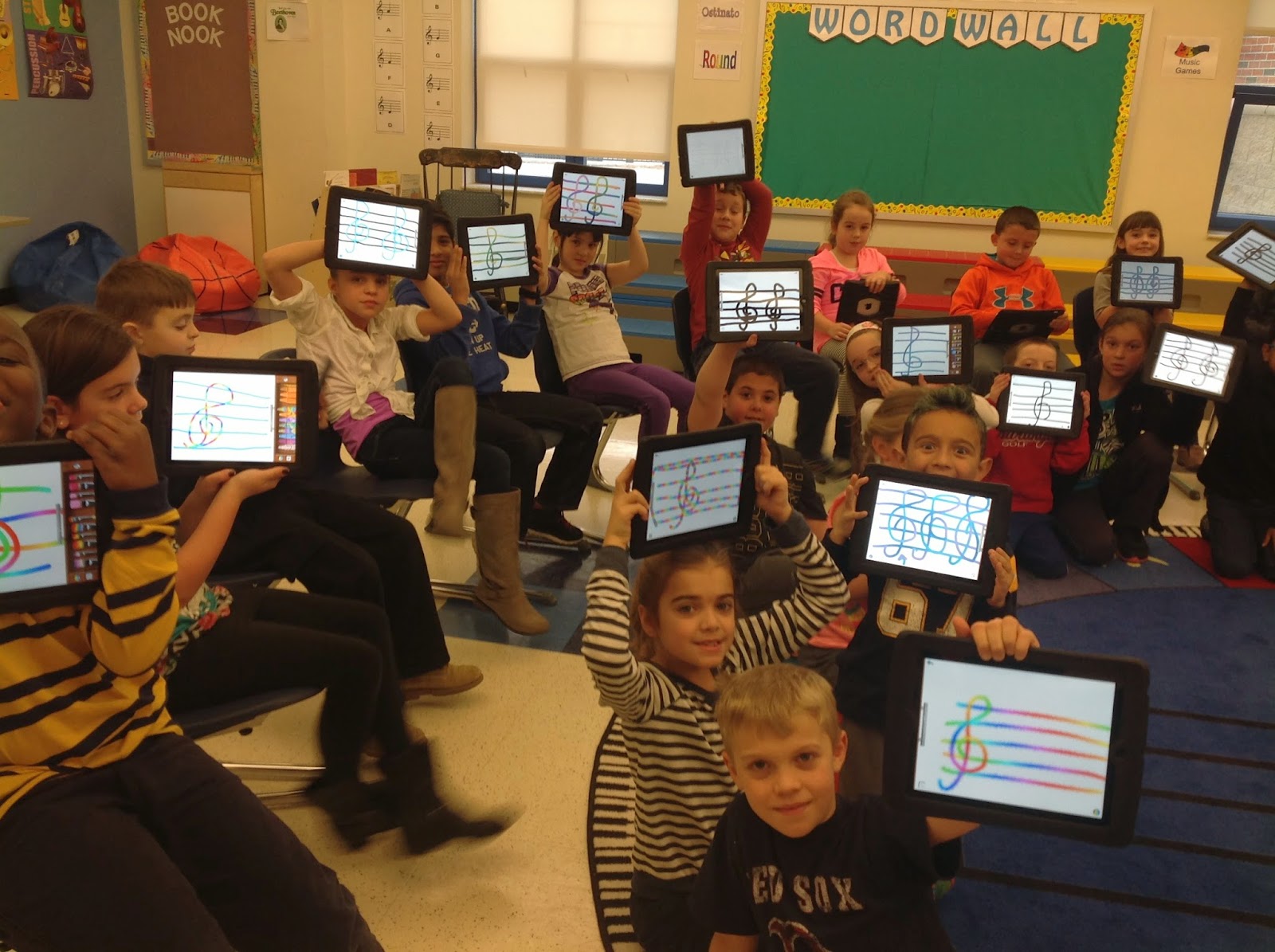 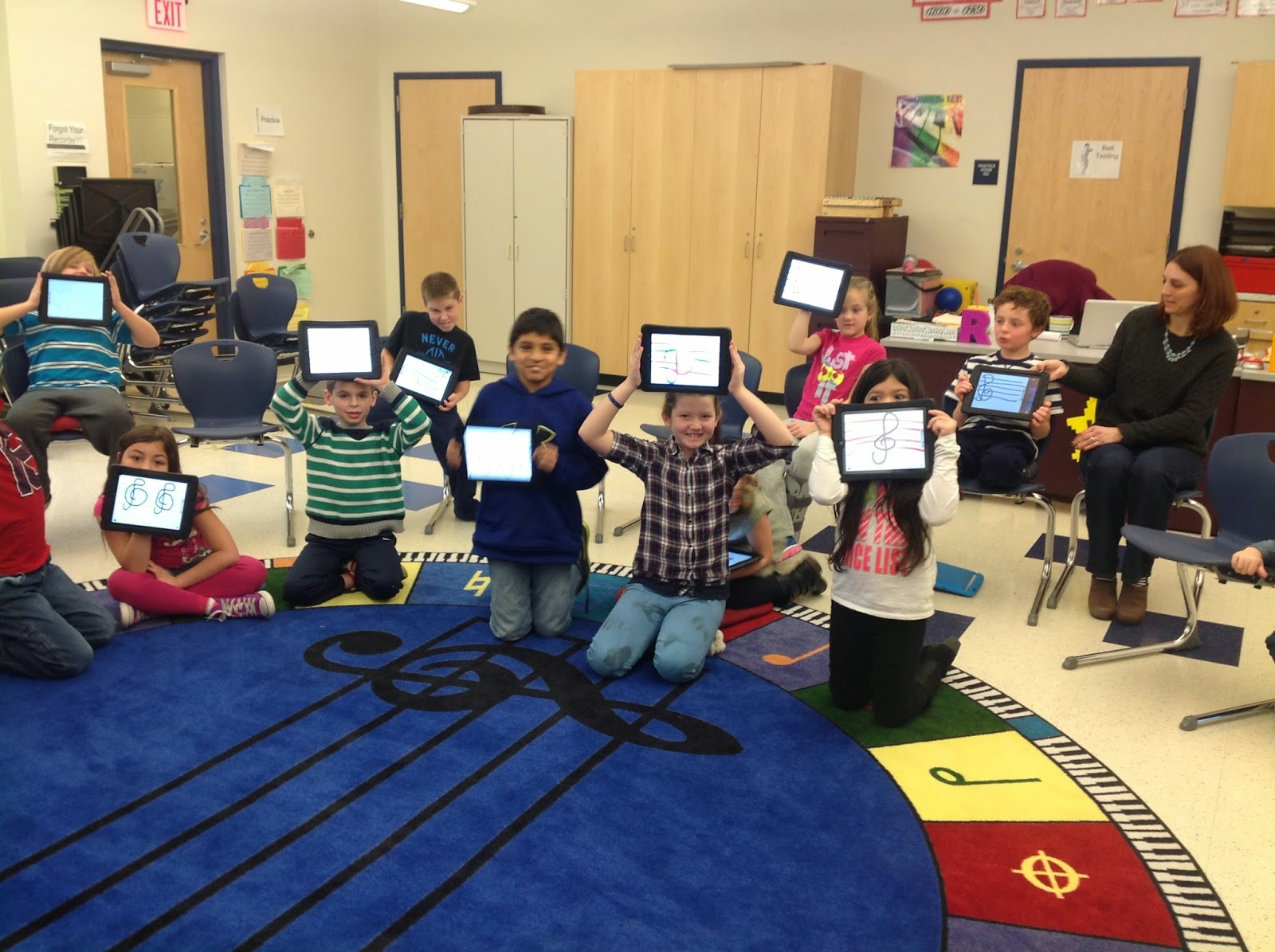 **Reminder! There will be an ensemble rehearsal TOMORROW for ALL FOURTH GRADE string players!  Please don't forget to bring in your instrument!**

Third Graders
Today we reviewed ALL A string and D string notes.  This includes:  D (open), E, F#, G, A, B, C#, and high D.  Some students are still struggling with remembering the fingerings.  Please encourage them to practice at home to reinforce what we work on in school!  Thank you.

We also played through page 13.

Fourth Graders
Our concert is this Wednesday!  Yay!! Please practice ALL concert songs, focusing on Firoliralera and Silent Night.

This week in music...

The first graders learned some new musical terms: verse and refrain.  The verse is a part of a song that has new lyrics each time the same tune returns.  The REfrain (also referred to as a chorus), however, is the part that gets REpeated, and it's the part that you REmember!  Our first graders recognized that each of those words starts with the same two letters!  The students applied these new terms to the song "Jingle Bells."  After we sang the song, we added sign language, then played an awesome game called "tap tap pass"- using our jingle bell hand percussion instruments!

The second grade students learned about our new composer of the month, Tchaikovsky!  Tchaikovsky composed during the Romantic Period, and one of his most famous works is the Nutcracker ballet.  We listened to the Trepak, or Russian Dance.  Of course it was only natural to have everyone dance along!  The students learned a complicated and fun dance, then we gave everyone scarves to use!

The third graders are starting to learn how to read music notation. We will be continuing to work on this skill for the next few weeks to prepare for the recorders that the students will start to play in the new year. It's so exciting!  They used their iPads and the Drawing Pad app to draw the musical staff, treble clef, time signature, measures, bar lines, double bar line and repeat sign.  Next week, they will learn how to add the rhythms and pitches!

The fourth and fifth grade students have been working towards their upcoming concert.  We are so impressed with their hard work and dedication!  We invite everyone to attend our evening concert on Wednesday, December 10th, at 7:00 p.m.

Remember:  Performers must arrive to Memorial that night at 6:40 p.m.  We'll see you there!
Posted by Mrs. Rzasa at 1:07 PM No comments:

**Reminder! There will be an ensemble rehearsal TOMORROW for ALL FOURTH GRADE string players!  Please don't forget to bring in your instrument!**

Today was PERFORMANCE DAY!!  This is an opportunity for each student to play a piece that represents their best.  Below are some of the benefits of Performance Day:


Before we get to the videos, here are the assignments for the week:

The Turkey Shot Out of the Oven

We hope you had a wonderful Thanksgiving!  Last week, the third graders sang, "The Turkey Shot Out of the Oven."  They got into groups and were each assigned a verse.  The groups came up with a little routine to perform while they sang.  It was so much fun!  In between the verses, the whole class sang the refrain.  Check it out: