This week, the first graders learned a chant called "I Think Music's Neat." Learning this chant  has helped the students realize that the number of beats in a song or chant stays the same- even if you perform it with a different tempo! We also learned a song about a nocturnal animal called, "The Bats Are All Asleep."  The teacher sings (using a crescendo), then the students respond (with a decrescendo).

Second graders learned a challenging new song called, "Come and Follow Me."  Each phrase is sung a little bit higher than the last.  Once the students were comfortable with the song, we added the body percussion!  It takes a lot of coordination to get the hang of, but we worked on it slowly and patiently. The students have done a wonderful job!  We also watched a short film about the life of Ludwig von Beethoven. Ask your child about this particular composer!

The fourth graders started learning a new folk dance called "Bridge of Athlone."  They first found Ireland on the map, then talked about the history of that famous bridge.

Enjoy the gorgeous weather and have a fabulous weekend!

Email ThisBlogThis!Share to TwitterShare to FacebookShare to Pinterest
Labels: 5th grade, class of 2018

This was a short week due to Monday's day off.  Here's what we were up to in music:

The first graders learned a new song this week called "Apple Tree" to celebrate the autumn season.  One student was the apple tree, and the other students held hands as they walked past him/her.  At the end of the song, each apple tree dropped a folded bandanna (the apple) onto the head of one of the students!  That student became the new apple tree, and the song was sung again! They also sang a song story in minor tonality called "Oh My." 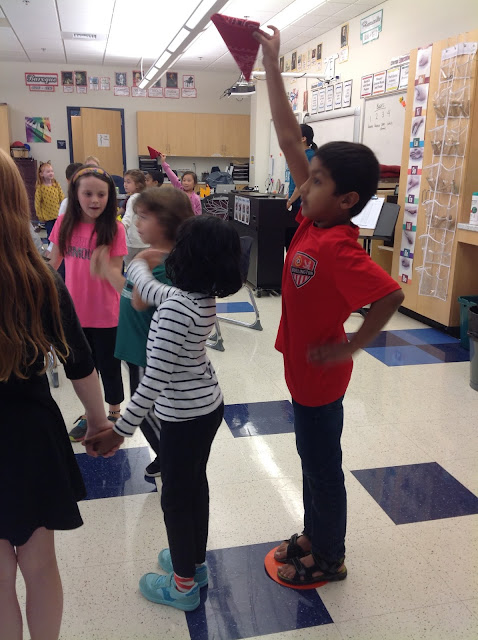 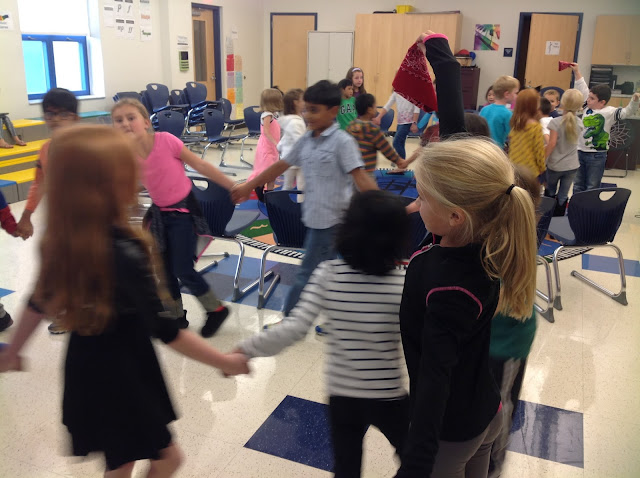 The second graders extended their activity with the song "I'm a Nut" by adding instruments (rhythm sticks) and composing new verses.  Below are some of the lyrics they came up with:

Please visit THIS BLOG POST to watch videos of some of the students singing their verses!


The third grade students filled in a Venn Diagram to compare and contrast two different pieces by Beethoven:  Sonata in G and Moonlight Sonata.  We asked them to focus on the mood, tempo, dynamics, rhythm, pitch, tonality, instrumentation, and anything else that they could think of.  Of course, some students may interpret the two pieces differently, and that's okay!  However, some qualities (such as instrumentation and tonality), are concrete and not open for interpretation. 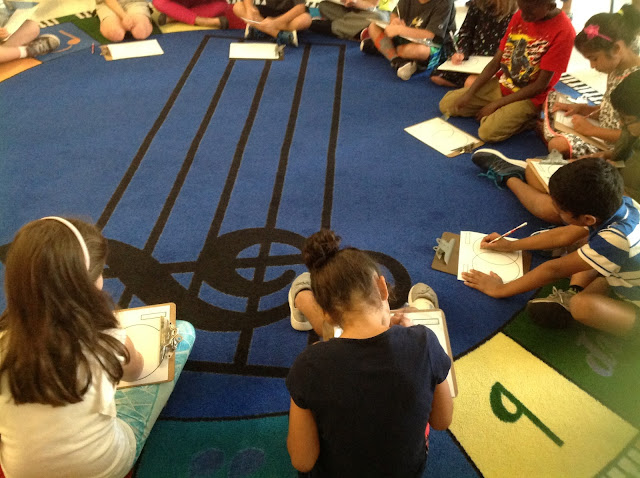 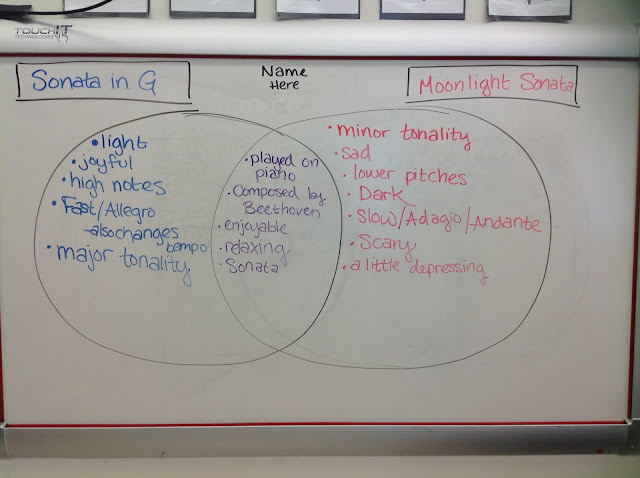 They also played a game called "Dipidu," and learned a Halloween song to practice sixteenth notes (du ta de ta).   We will continue these next week!

The fourth graders started a new folk dance called "Bridge of Athlone."  They first found Ireland on the map, then talked about the history of that famous bridge.  We listened to an Irish folk song, and the music was very familiar to one of our students...Madeline does Irish step dancing, so we asked her to perform a bit for us!

The students will be learning how to do the folk dance (not the step dance!) next week in class.  They also continued to prepare for our Veteran's Day assembly.

The fifth grade students loved the Bridge of Athlone dance from last year SO much, that we did it again this year! They remembered it quite well, so it was easy to review.  I decided to film Mr. Rabazzi's class...however we encountered a bit of an issue when the carpet slipped and knocked over the iPad!

Haha!  I was so impressed how they were able to recover and keep dancing.  We did film it once more, and it was a little less chaotic this time:

After the bridge dance, they started to learn a piece called "Halloween Night."  We discussed the song's tonality (minor), and reviewed how to read a musical score.  They had just enough time to learn two different xylophone parts, and we will continue playing next week.

In chorus, the students tried to sing "Celebrations Around the World" from memory.  We still need to clean up those verses!  Then they worked on their grade level pieces.  4th and 5th grade students also started a new African song called "Sing Noel."

We hope you have a wonderful week!

The second graders recently learned a song called "I'm a Nut." They extended the activity by adding instruments (rhythm sticks), and composing new verses.  Below are some of the students singing the lyrics they wrote!

Email ThisBlogThis!Share to TwitterShare to FacebookShare to Pinterest
Labels: 2nd grade, class of 2021

This was my first week back from maternity leave and it was so nice to reconnect with all the students again. There were so many rewarding moments, which reminded me again of why I really enjoy teaching.

Here is what we did in music this week....


In first grade, the students learned a fun chant with instruments called, "Loose Tooth." Mrs. Rzasa and I noticed that our first grade friends are loosing many tooth these days that we thought they would have so much fun learning this chant. Three body percussion parts accompanied three word- Loose Tooth (two claps), wiggly jiggly (pats on your knees), and thread, head, bed (snaps). We extended the activity by taking out these words and only using the assigned body percussion when we sang these words in our heads. The students had so much fun that we added instruments to this chant!

Second grade students learned a silly song called, "I'm a Nut." It's a song about an acorn who is cracked because everyone walks all over him. Some students had a chance to make up their own rhyming phrase. Next week we will continue this activity and add instruments to this fun little song!

Our third grade students performed "Four White Horses" with the clapping routine. During the interlude (the middle part of the song inserted between a longer composition), the students made a conga line. It was so much fun and the students did a fabulous job with clapping to the song at a steady tempo. 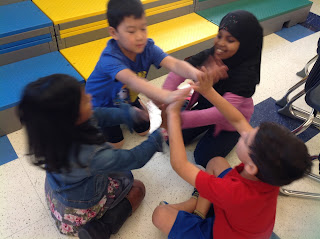 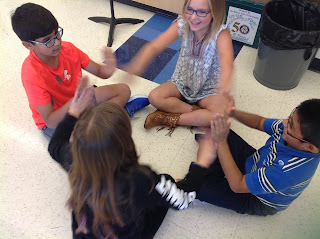 The fourth graders have started to prepare for their Veteran's Day assembly.  They will be singing an Armed Forces medley, which goes through the songs for each of the five branches of the military.  Fourth grade parents: please mark your calendars for Monday, November 6th at 1:30pm. We also continued learning the cup game routine.

The fifth grade students discussed the similarities between folk music and folk dancing.  Then, we found Ireland on the globe and learned about a bridge in southern Ireland, the Bridge of Athlone.  They spent time learning a folk dance inspired by that Irish bridge, and can't wait to do it again next week! 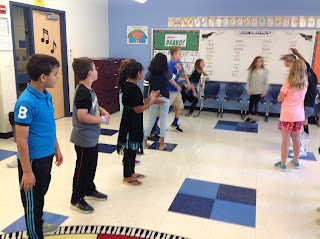 We hope you have a relaxing long weekend!