The first grade students discussed the instruments of the orchestra and talked about the song, Carnival of the Animals. This hilarious musical suite which consists of fourteen movements is composed by a French composer, Camille Saint-Saëns.  Each movement is about a different animal (except for the little joke) and features different instruments of the orchestra. The animals are having a carnival and everyone is invited to participate, even our own students! After discussing each part, the students had a lot of fun moving around to the music of the various animals. Next week we will watch a movie about the Carnival of the Animals.

The second graders worked on a class composition.  They will be learning to read music notation next year, so this week we gave them a brief introduction to the staff.  Then, we reviewed rhythmic values and the musical alphabet - there are only 7 letters!   To compose, students took turns with selecting a rhythm (quarter note, eighth note pair, or quarter rest), then choosing a pitch (A, B, C, D, E, F or G).  Students continued until each class had their own song!  During their second music class, students got to pick their partners and added lyrics.  They wrote words to accompany the tune, making sure to match up the correct number of syllables to each rhythm. Next week, they will be performing them.

We are so proud of our third grade students who are making great progress in learning the recorder. The students played Musical Jenga and Old Maid during their centers day.  In their second music class, we reviewed "Lucy Locket" (the green belt song), and learned "Old MacDonald."  Our new note, D, can be a little tricky! The students had to make sure they were covering the holes all the way! We also learned a new song for the recorder concert, "Rock Boom BAG." Here is a picture of one of our students diligently practicing their recorder at home: 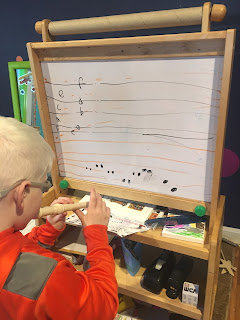 Our fourth and fifth grade students designed their own t-shirts for the spring concert. Each student got to pick out a musical element to paint on the front side of the shirt and decorated the back of their shirt with their name, nick name, and their favorite number. Here is a sneak peak at some of their creativity: 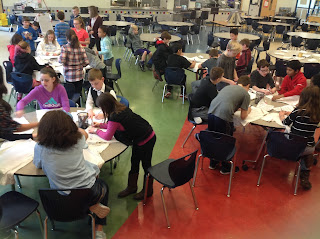 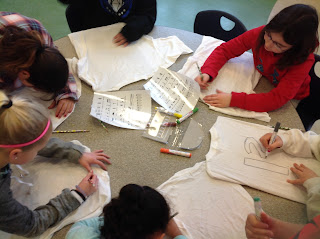 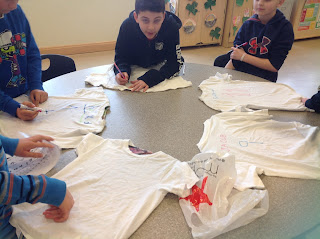 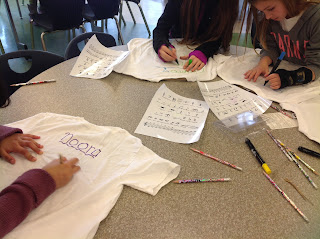 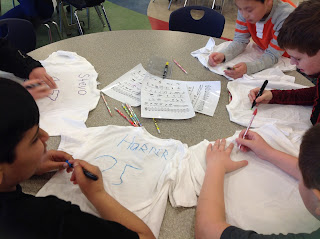 In chorus, we finished learning "The Galop" and 5th grade's featured song, "I Have a Shadow. "
All lyrics are now on the blog so please start memorizing your songs! 2017 Spring Concert Lyrics.

As we approach April, we hope this will be the last few days of snow! Have a wonderful weekend and stay warm!

Fourth Graders
4A, 4B, 4C:  The fourth graders have been rehearsing the Blue Danube Waltz.  Please count carefully, as this song has 3 beats in each measure!  They have done an amazing job so far, especially since they just got the song last week.  Some students also had time to review Final Countdown.
Assignment for 4th graders:

Fifth Graders
5A and 5B:  The fifth grade students have continued to work on the Blue Danube Waltz, the Final Countdown, and their Twinkle Variations.  Keep up the good practicing! :)

Here's a quick video from their first orchestra rehearsal on the Blue Danube Waltz.  I only filmed 8 measures, and I regret the fact that I didn't film the first 24!  They really did an awesome job.

This week in music, the first grade students reinforced the scale tone "do" through echoes and warm-up activities.  They then finished their Leprechaun song and game from last week.  It was so much fun to play the glissando on the glockenspiel!  They also started a new song called "Walk to the House."  There are 2 moments in the song where two students each select a hand percussion instrument and play a special rhythm.  The rest of the class gets to guess which instruments were played based on the sound!  It is a great opportunity for them to review the timbre and names of each instrument!

The second graders have started to rehearse for their Memorial Day Assembly, which will be in May.  We discussed the importance of the holiday, then learned "Grand Old Flag."  We sang it then added fun hand movements which we will do while we perform!  The students also learned the history and meaning behind the song "Pop Goes the Weasel." Then, they did a great circle dance along with that song.

The third graders have been progressing wonderfully on the recorder!  We reviewed the green belt song (Lucy Locket), and practiced switching between the G and E.  Then, they learned a new note- low D! It's located right beneath the staff, and is played by adding one more finger to the note E.  Please encourage your child to practice at home, as this will help them to be successful on the recorder!

The fourth and fifth grade students learned about improvisation this week.  First, we reviewed the proper technique for the xylophones, metallophones, and glockenspiels. Then, students removed the F and B bars to put them into C pentatonic - The pentatonic scale has 5 pitches, and we were using C, D, E, G, and A.  We first improvised on a four quarter note rhythm pattern as a group, then encouraged the students to experiment with their rhythms. We discussed question and answer phrases, and asked students to end their pattern on "do" (C) when improvising an answer phrase.  Students took turns improvising questions and answers with teachers and classmates.  It was so much fun!

Below is a video of fourth graders improvising their own four beat patterns:

In chorus, we announced the students who will have a special part in our spring concert.  This Tuesday, we will do a "table read" with the speakers/actors.  Practices for singers, dancers, and instrumentalists will be soon as well.  During our chorus rehearsal, the students worked on polishing up their grade level pieces.  They also rehearsed "Galop" - an exciting piece consisting only of solfege syllables!

We hope you had a fantastic weekend!
Posted by Mrs. Rzasa at 5:06 PM No comments:

Email ThisBlogThis!Share to TwitterShare to FacebookShare to Pinterest
Labels: 4th grade, class of 2018

The first grade students enjoyed learning and playing on hand percussion instruments.  They can now identify and play the following instruments:

To celebrate St. Patrick's Day, the students also learned a song about a leprechaun.  They then played a game that included a hand drum as well as a glissando on the glockenspiel.

The second grade students also celebrated St. Patrick's Day by making up their own folk dances to accompany the Irish Washerwoman song.   Check out some of their videos below!

The third graders have been doing an amazing job on their recorders and in the recorder centers!  Many of them have started the green belt (Lucy Locket), so we are now working on low E.  Just as a reminder, if you need extra help or would like to get tested on your next belt song, Mrs. Niu will be available on Tuesdays from 8;10am-8:30am and Mrs. Rzasa will be available on Fridays from 8:10am-8:30am.

Our fourth grade students completed and performed their ABA compositions. Here are their compositions by classes: ABA Compositions

Have a wonderful weekend!

Email ThisBlogThis!Share to TwitterShare to FacebookShare to Pinterest
Labels: 2nd grade, class of 2020

The fourth grade students have been working on compositions in ABA Form.   In ABA form, the beginning and end of the composition are the same, and it the B theme is different.  "Twinkle, Twinkle Little Star" is an example of a popular tune in ABA form.

The students then selected hand percussion instruments for their performances.  Please check out some of their videos!

The fifth grade students have been working on compositions in Rondo Form.   In rondo form, a main theme (similar to a refrain), alternates with other contrasting themes.  The compositions must:

The students then selected hand percussion instruments for their performances.  Please check out some of their videos!

Fourth Graders
4A, 4B, 4C:  All fourth grade students worked on their grade level song, the Surprise Symphony.  For Final Countdown, we talked about how important it is to be independent on your part.  We have been rocking this piece in lessons, and then struggling in orchestra.  Remember to keep counting, and you'll do great! :)
Assignment for 4th graders:

Fifth Graders
5A and 5B:

This week in music, the first grade students completed their Peter and the Wolf composition projects. We uploaded the last two videos here - they did a great job!  They also reinforced the resting tone in major tonality (do) with a fun song called "Charlie Over the Ocean."  They had to decode the secret meaning behind the fish we drew on the board.  The fish swimming higher in the ocean were "so," the fish swimming in the middle were "mi," the lowest fish was "do," and the seaweed represented quarter rests!  Then, they played a game which is similar to "Duck Duck Goose" while singing the song.

We had an "extra" music class with two of the first grade groups, so they composed new rhyming lyrics to "Oh My."  They did an amazing job!

The second graders tested their ability to recognize the unique sounds of instruments by playing "Instrument Bingo."  Students were given bingo cards with photos of different orchestral and world instruments. Then, they would hear a recording of an instrument and had to identify it based on its sound, and check their card to see if they had it.  The students who got five instruments in a row earned BINGO, and got to select a special music prize from our prize box. 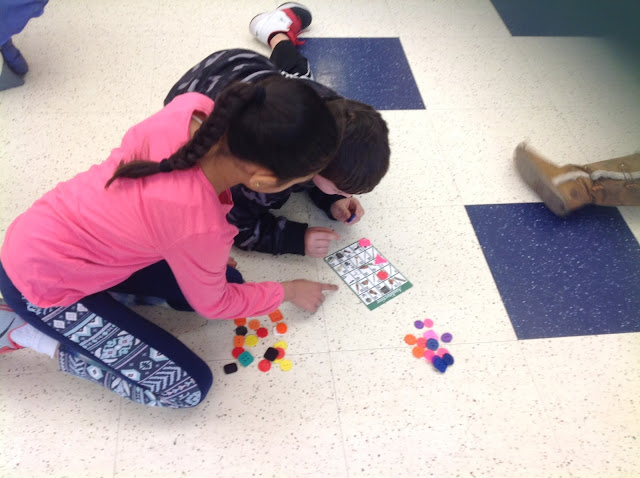 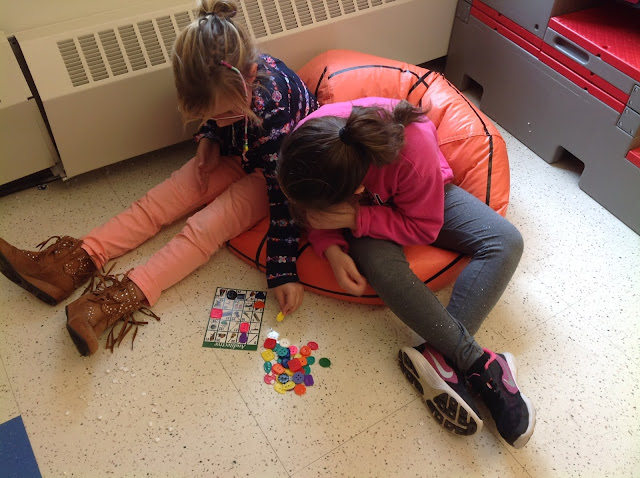 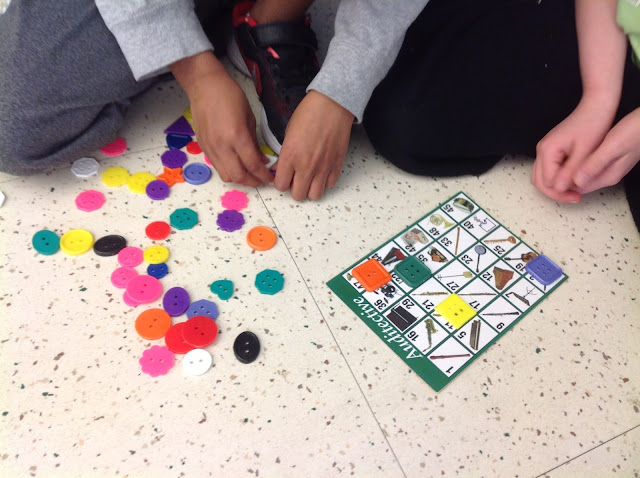 The third graders have continued to do the activities in our different music centers, while testing for their next belts in Recorder Karate.  We are so proud of their progress so far!  If your child is having difficulties, they can always come down to see us for extra help.  On their instructional day, the third grade students worked on counting rhythms and sight reading Gently Sleep.  We also had time to play JoyTunes!  Scroll down to the bottom of this page to get more info on how to play at home.

The fourth and fifth grade students have started to record their composition projects and perform for their peers.  The fourth grade projects are in ABA Form, and the fifth graders composed in Rondo Form.  We will be uploading them soon!

In chorus, the students all worked on their grade level pieces.  We also rehearsed "Listen to the Rain" and "Galop."  We will start selecting students for speaking parts, and will hold auditions for dances/solos soon.  This is sure to be an amazing performance!

Congratulations to all students who participated in the All-Town Band concert last night!

Email ThisBlogThis!Share to TwitterShare to FacebookShare to Pinterest
Labels: 2nd grade, class of 2020

Orchestration of Peter and The Wolf

Here is Mrs. Gearin and Mrs. Farrell's classes performing Peter and the Wolf.

The students selected a hand percussion instrument for each character, then composed a short rhythm to be played when that character is mentioned in the story.