First grade students learned about audiation the first half of the week.   Audiation is when you can hear music in your head.  They practiced audiating with a cute song called "Little Peter Rabbit" - with hand motions.  We also learned a song called "Charlie Over the Ocean" which allowed the students to practice singing the pitches of "sol" "la"  "mi" and "do." The students had a great time playing the game, which is like a musical version of "Duck, Duck, Goose."

The second graders started to learn music for our Memorial Day concert which will be held on Friday, May 25th.  We learned the song and hand motions to "You're A Grand Old Flag." The students are very excited about this performance.


Students were also challenged to figure out the bass line for the yellow belt song, "Merrily We Roll Along." We also learned how to play low D and low E.

Our fourth and fifth grade students are now in full concert preparation. Lyrics should be memorized when we see the students after spring break. Please note that due to the MSMS open house on the day of our concert, May 2nd, our spring concert will now begin at 6pm.  Letters, updating this new time should have gone home on Friday.

Have a wonderful Spring Break! Best of luck to Mrs. Weinberg will be running the Boston Marathon!!
Posted by Mrs. Niu & Mrs. Rzasa at 8:48 PM No comments:

Email ThisBlogThis!Share to TwitterShare to FacebookShare to Pinterest
Labels: 3rd grade, class of 2020

This week, the first graders helped bring in the spring season by playing a game and singing "I am Looking for Eggs." The students had so much fun looking for eggs hidden around the music room as they sang the fun, catchy song. As soon as a student found an egg, they were directed to shake the egg shaker (which represented a Spring egg) to the beat of the song. The students who found the eggs during each round of the game became the ones that would hide the eggs for the rest of the class.

Second grade students also played an egg game called, "Spring Delight." Three baskets with three different rhythmic patterns were put into the middle of the circle.  Students passed around a spring basket filled with colorful eggs to the beat of the song.  Whoever has the basket on the last word of the song was the lucky winner who got a chance to open up one of the eggs. Inside each egg were two special things- a fun little sticker (or a few stickers!) and a word that relates to the spring season. The lucky student got to keep the sticker but also had to figure out which rhythmic egg basket their "special word" belonged too.  It was so much fun to see which rhythmic basket had the most eggs at the end of the game!

The students also got a special performance by Mr. Dugan on the guitar! 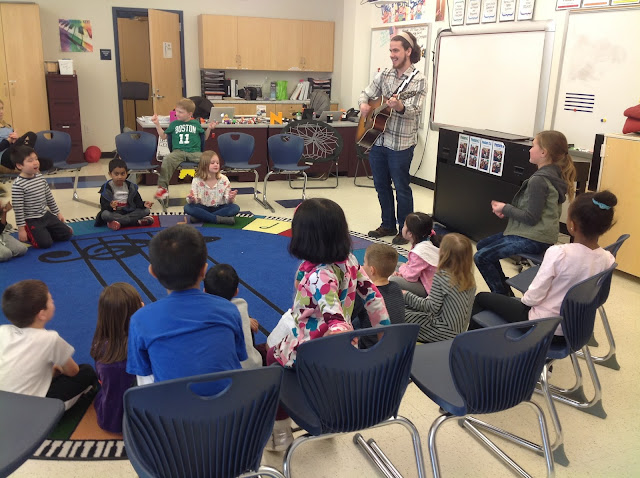 The third graders learned how to play a new note on the recorders - low D! Once they felt comfortable with the new note, they played a bass line to accompany "Hot Cross Buns." Half of the class played the melody while the other half played the bass line, then we switched! We challenged the students to figure out the bass line for "Merrily We Roll Along" over the weekend, we can't wait to see if any of them got it correct! In centers, we played Musical Jenga - the students had so much fun testing their musical trivia while playing the game.

The fourth and fifth graders finished their ABA and Rondo form compositions, then reviewed all the notes on the treble clef staff. They played Staff Wars as class to test their knowledge, then started a new composition. 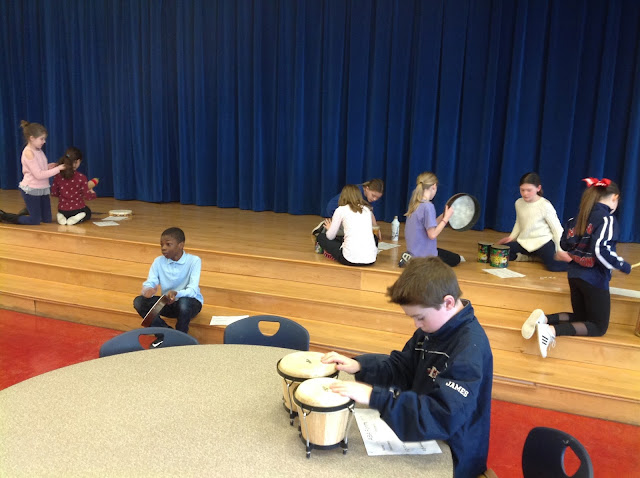 In small groups, the students composed an 8 beat melody on the glockenspiels. They used the pitches from the C major scale (from C to high C'), and notated their tune on staff paper. Next, they coded their composition on the iPads, to program a robot named Dash to perform their tune! After every group finished their coding, we got to watch Dash perform the entire class song! Check out the video below from Mrs. Harlow's class! 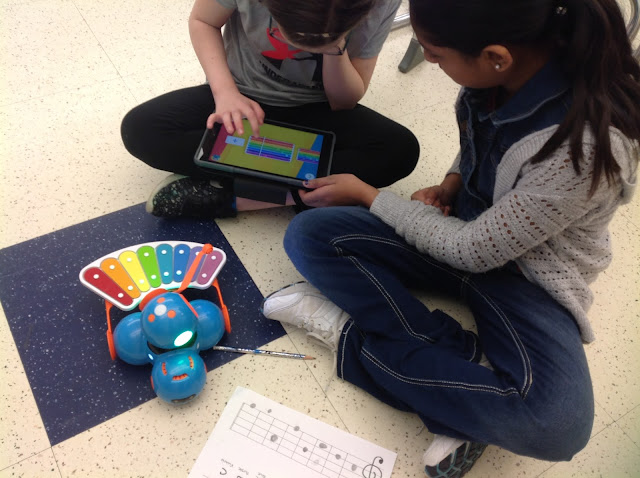 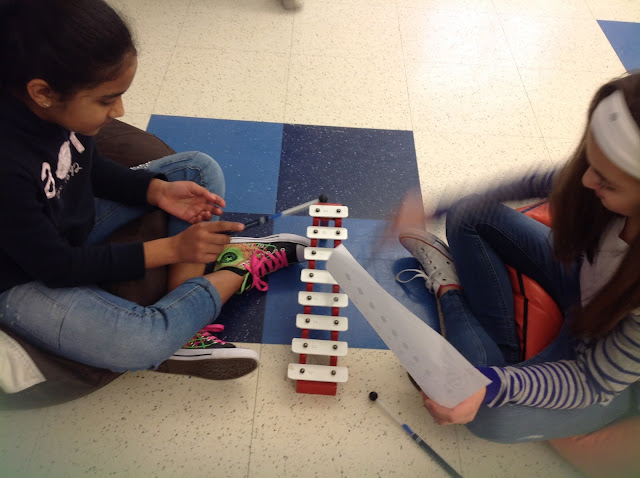 Third, fourth, and fifth grade string students have been preparing for the 1st annual All-Town String concert.  The concert is on Monday, April 9th at 7:00 p.m. in the Burlington High School Auditorium.  Below is our fourth grade orchestra practicing Ode to Joy:


We hope to see you at the concert!