Spring has sprung in music this week! The younger students played games related to eggs while the older students worked on their compositions.


The first graders helped bring in the spring season by playing a game and singing "I am Looking for Eggs." The students had so much fun looking for eggs hidden around the music room as they sang the fun, catchy song.   As soon as a student found an egg, they were directed to shake the egg shaker (which represented a Spring egg) to the beat of the song. The students who found the eggs during each round of the game became the ones that would hide the eggs for the rest of the class.

Second grade students also played an egg game called, "Spring Delight." Three baskets with three different rhythmic patterns were put into the middle of the circle.  Students passed around a spring basket filled with colorful eggs to the beat of the song.  Whoever has the basket on the last word of the song was the lucky winner who got a chance to open up one of the eggs. Inside each egg were two special things- a fun little sticker and a word that relates to the spring season. The lucky student got to keep the sticker but had to figure out which rhythmic egg basket their "special word" belonged too.  It was so much fun to see which rhythmic basket had the most eggs!

Our third grade students had so much fun practicing their learned notes of B and A on  Joytunes.  We reviewed low E and went over the green belt song, "Lucy Locket." For our centers, we added two new games: Musical Jenga and Crazy 8. Ask your 3rd grade students about these games. Here are some pictures of our students working hard and having fun at the different centers: 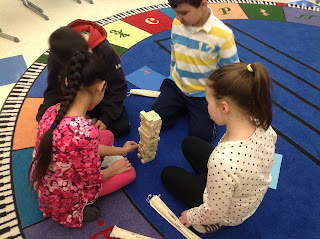 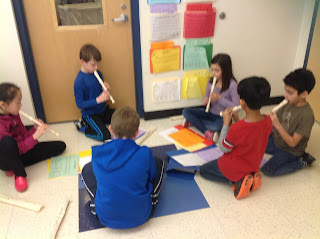 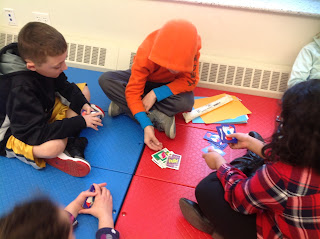 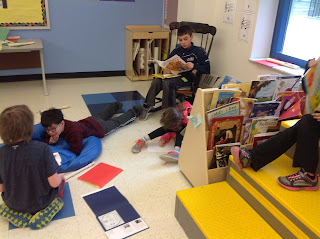 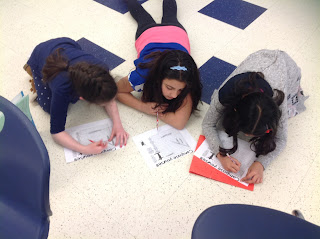 In fourth and fifth grade, the students got into their groups and began composing music for their stories. As I was walking around, it was so neat to see the creativity being drawn out from each student. In one group, I observed how the students used the combination of the violin, trumpet, egg shakers and hand drum to create music that went along with a particular page. Mrs. Rzasa and I can't wait to hear all of these performances!

We accomplished so much in chorus this week! Our Thursday classes completed learning,  Mozart's Messy Room, Ode to Beethoven and The Kazoo Koncerto. The piano accompaniment recordings and the lyrics to each song can be found on the chorus page:

Please start memorizing the songs! Don't forget that solo auditions will be held next Tuesday and Wednesday during intervention time. Just come down to the music room for one day! Dancing and acting auditions will take place the following week. As a reminder, the concert will be on Wednesday, May 11th at 7pm.

Have a wonderful three day weekend!

This week, the first graders finished learning about the rest of the percussion instruments we have in class! Their favorite was probably the thunder drum!   We also reviewed the different rhythms, and recognized that the du, du-de, and rest each take up one beat.  This will help us when we start our composing projects.  To celebrate St. Patrick's Day, the students also learned a song about a leprechaun.  They then played a game that included a hand drum as well as a glissando on the glockenspiel.

The second grade students also celebrated St. Patrick's Day by making up their own folk dances to accompany the Irish Washerwoman song.   Check out some of their videos below!  They also continued to rehearse their music for the Memorial Day Assembly, which will be on May 25th.


The third graders have been doing an amazing job on their recorders and in the recorder centers!  Many of them have started the green belt (Lucy Locket), so we are now working on low E.  It's a bit tricky to cover all of the holes, but they are getting better and better each day!

In fourth and fifth grade, the students have started their new composition projects.  Unlike our Form compositions (ABA Form and Rondo Form), this time there are no set rules.  The students are free to compose with any rhythmic patterns, and they may use any classroom instruments.   Some students are even using their orchestra/band instruments or the iPad!

In chorus this week we did a lot of work on the Kazoo Koncerto, our fun finale piece!  In addition, the fifth graders continued to rehearse Mozart's Messy Room Sonata, and the fourth graders worked on Ode to Beethoven.

Have a great weekend, and let's hope we get spring weather instead of snow! :)

Mrs. Rzasa and I went to a music conference all day Thursday and today so here is what our students learned in music on Monday, Tuesday, and Wednesday.

The first grade students enjoyed learning and playing on hand percussion instruments.  They can now identify and play the following instruments:

Next week we will finish learning a few more percussion instruments.

Our second grade students continued to prepare for their Memorial Day Concert. They learned the partner song to the verse, "Grand Old Flag." To help celebrate St. Patrick's day next week, the students learned a fun Irish Jig dance. Here is a video of second graders rehearsing their Irish dance steps:

All of our fourth graders finished performing their compositions. They did such a great job! You can view your child's ABA performance now: Compositions. Next week will start a new composition project!

The fifth grade students have started a new composing unit as well.  We read "Where the Wild Things Are" to the classes, and we discussed how adding music would make the story more interesting.  What kind of music would work for each part of the story?  Which instruments would be most appropriate to get the perfect sound?  Next week, they will experiment in small groups and compose a short piece to ago along with their assigned part of the story.

Chorus will resume next week!

We hope you enjoy the beautiful weather! Have a lovely weekend!

Email ThisBlogThis!Share to TwitterShare to FacebookShare to Pinterest
Labels: 2nd grade, class of 2019

This week, the first grade students reviewed the scale pitches of "so," "la," and "mi," performing them with different actions while they echoed 4 beat patterns.  Then, they were introduced to a new scale tone - "do."  They tested out their new solfege syllable by singing the song, "Charlie Over the Ocean."  The last pitch in that tune is a "do!"  The students had a great time playing the accompanying game, which is like a musical version of "Duck, Duck, Goose."  The first graders also sang a song in minor tonality this week called "Oh My."

The second graders had fun doing a new movement activity - "Just Dance."  It was a great way to get out some of our sillies, but to also respond to what was happening musically through dance.  We also started to learn music for our Memorial Day concert.  This year, the second graders will be hosting this important assembly, and bringing the school community together through song.  Parents of second graders will be invited to attend the performance on May 25th. We will send home more information as the date approaches!

The third graders have continued to practice their recorders this week.  By now, all students have received their white belts for accurately performing "Hot Cross Buns," and some students have even advanced to the yellow and orange belts!  We would like to remind parents to encourage your child to practice at home.  This will help ensure success in class.  If your child is struggling, they may attend extra help with myself or Mrs. Niu on Wednesday mornings from 8:10 - 8:30.

The fourth and fifth graders have completed their composition projects, and we have posted some of their performances HERE and HERE on the blog!  Next week, they will be starting their new unit, where they will add music and instrumental sound effects to children's literature.

In chorus, the students started two new pieces.  We introduced the fifth grade featured tune, "Mozart's Messy Room Sonata." and the fourth graders started "Ode to Beethoven."  The students were very excited to start rehearsing the "Kazoo Koncerto" as well!

We hope you have a lovely weekend!