In first grade, we learned a song and game called, "Lucy Locket." One person is Lucy (he/she hides the pocket book in the room) and another person Kitty Fisher (finds the pocket). The rest of the students play an important role in this game because they help Kitty Fisher find the pocket by how loud (forte) or quiet (piano) they sing the song. The students had so much fun playing this game!

Our second grade students finished the game, "Ickle Ockle" and then learned a song called, "I'm An Acorn." Students got to play the rhythm sticks after the words, "I'm a nut X X, I'm a nut XX." Then students paired up with another friend in their class and composed their own creative, "I'm a Nut" song. The only rule was that the last words of the first two lines had to rhyme. Here is one group performing their composition:


Here is an example of Mrs. Langone's class demonstrating rest position with their rhythm sticks: 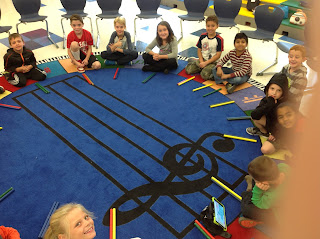 The third grade took a little boat ride and learned a song called, "Two In Boat." At every stanza, students had to find a new partner to bring into the boat. At the last stanza, students "swung their partners round and round." We also learned a new musical style called calypso.  We then sang "Four White Horses," a traditional Caribbean folk tune with awesome steel drum accompaniment!  Once the song was mastered, we added a fun clapping routine.  Quartets of students clap the hands of the person across from them (either high or low) then clap the hands of their neighbors to the sides.  The routine repeats with regular hand claps in between each move, and alternating between high and low.   It is a little tough to get the hang of it, so we will continue this activity next week!

The fourth graders learned a cup game routine this week.  Next week we will change the tempo and do variations of the routine.

Fifth grade students finished the cup routine, "I've Been to Harlem." We also learned a challenging cup activity, which goes with Edward Grieg's "In the Hall of the Mountain King."  We used a traditional recording of the piece, as well as a dubstep version!

Here is a picture of Mrs. Gonzalez's and Mrs. Warford's class doing stretches: 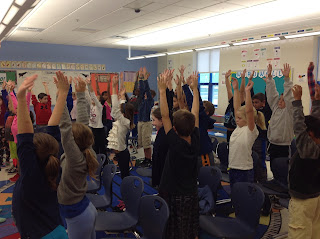 We hope you all have a wonderful and dry weekend!
Posted by Mrs. Niu & Mrs. Rzasa at 8:34 PM No comments:

This week in music, the first graders learned their first two scale tones - So and Mi.  We tossed around a ball to help us practice - when the ball was in the air everyone sang "so," and once it was caught everyone sang "mi."  It was so much fun!  They also finished their Welcome Back song and activity, where we explored different tempos and dynamics.  Then, we took a pretend field trip to a musical kitchen, and all of the students became chefs to create an amazing soup!  Ingredients were added by each child, and in between we performed the "Chop, Chop, Chippety Chop" chant.   It was quite a busy week in first grade, since they also learned a new song and game called "Lucy Locket," which we will continue in the next music class!

Second grade students reviewed the new scale tones they learned last week - Re, Fa, and Ti.  Now they can sing the entire major scale!  We sang it in unison as well as in a round.  Their new game for this week was "Ickle Ockle." What does "ickle ockle" mean?.....NOTHING!  It's gibberish :) After learning the song we played the game.  The class walks in a circle around one person (the Ickle Ockle) who gives another friend a high five after the song ended.  Once the Ickle Ockle chooses a partner, the other students must quickly find a partner to high five too. The last student without a partner becomes the new Ickle Ockle.  It was so much fun!

The third graders learned a fun sewing song called, "The Thread Follows the Needle."  In the activity, one student is a needle and another student is a knot.  The rest of the class is in between and they become the thread.  The needle leads the thread through the "fabric," and when the all students have gone under a cross stitch is produced (see second photo below - crossed arms represent the stitch).  All of this happens while they sing the song. It was a lot of fun! 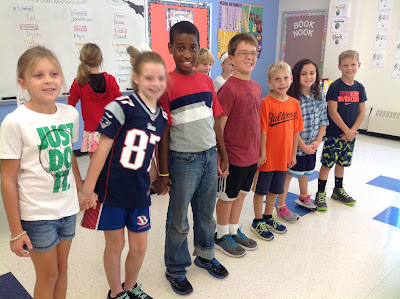 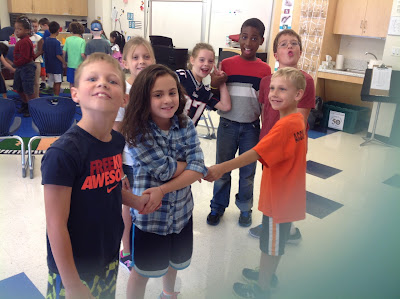 The fourth graders finished the "Rocky Mountain" stick passing game from last week - it got even more exciting when we added more colors, resulting in more eliminations each round!  They were also started a cool cup passing game with a catchy rhythm!  We will work more on it next week.

The fifth graders reviewed the cup passing game they learned last year, then added an extra twist by singing a song to go along with it!  "I've Been to Harlem" does not have the same rhythm as the cup routine, so it can be a little tricky to do at the same time.  We will continue working on this activity next week!

Our fifth graders were on a field trip to Camp Bournedale on their chorus day, but luckily the 4th graders were here for theirs!  We learned important skills for singing in a chorus, including proper breathing and posture.  Our two expanding ball friends, Bill and Ted, help us with breathing.  When the ball expands, we fill our lungs with air, and then release on a "tsss" sound as the ball contracts (just like when our lungs deflate!).  It's important to control our air, which will help when we sing long phrases and high notes in our music!

They also learned how to follow along with a musical score, which shows more than one part on the same page.  Last year on recorder and violin, the students only saw their own music.  In chorus, they get to see the vocal melody, harmony, AND piano parts all at once! 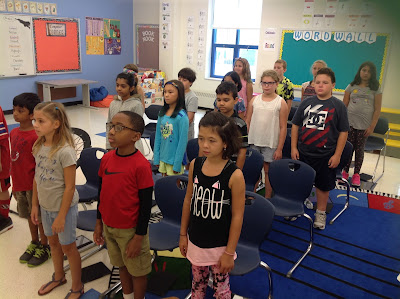 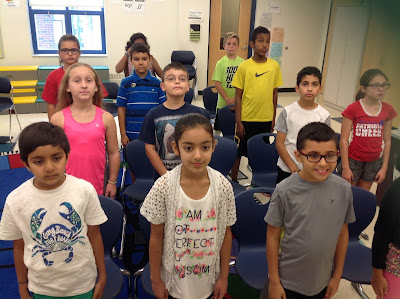 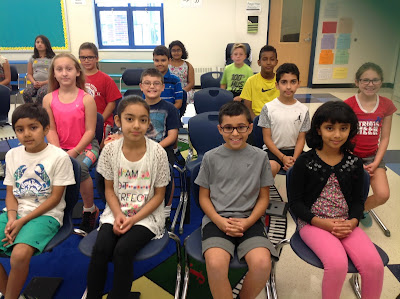 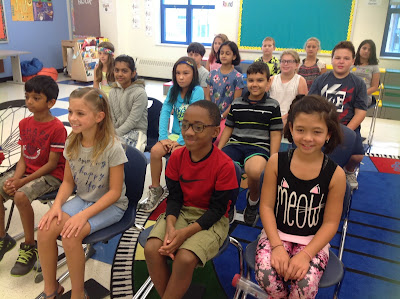 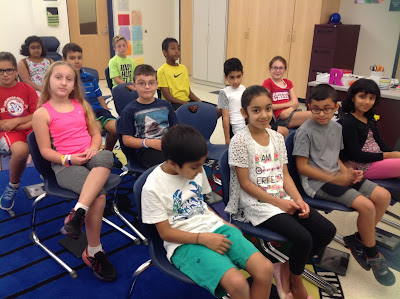 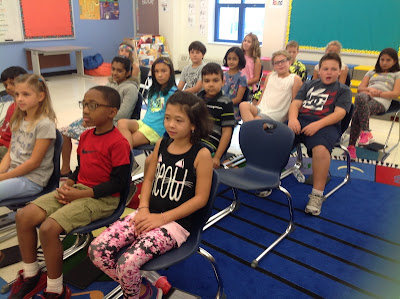 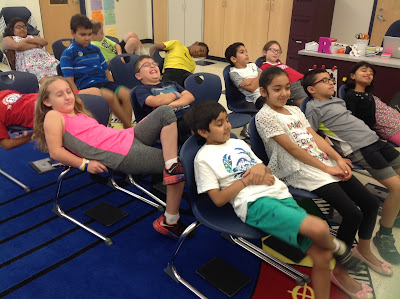 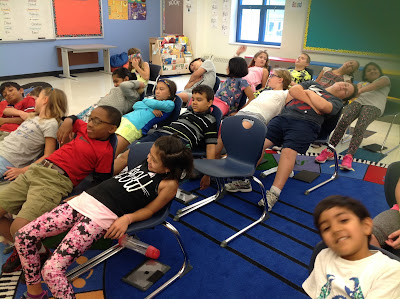 (Posture 3: VERY Relaxed - not appropriate for singing or learning)

We hope you have a fantastic autumn weekend!

Welcome back to school! We made it through our first full week of school! Congratulations to everyone!

We hope you and your family had a fun and relaxing summer!

To start off the new school year, we did played the game, "Freeze Dance" with every grade level. Here are some pictures: 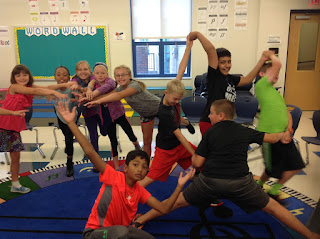 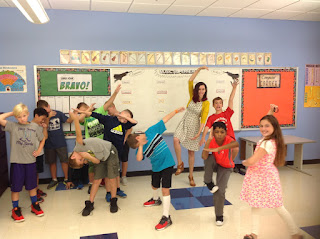 Here is what we learned in music this week:

The first graders are so excited to have music class this year! We discussed the rules and fun things like BRAVO and Music Superhero, and danced along to a funny song about clapping, jumping, swaying, and freezing.  The students each sang their name as a solo in our "Chicka Chicka Boom Boom" activity and chant! Our first graders did so great that we gave each student an egg shaker to sing or speak with their name. Here is a picture of how a Music Bravo  line should look: 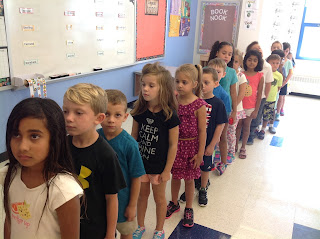 Can you believe that our second grade students were jump roping in music this week? We learned a a fun song called, "Skipping Rope Song." Students had to run into the rope when their name was sung and on the last word of the song, they had to jump out. Here are some videos of the students playing singing and playing the game:


We also earned a new song called "Grizzly Bear."  The song explores various dynamics, including piano, forte, and crescendo.  It's tricky to sing loud without screaming, but the students did a lovely job!  There is a game that we played along with the song: one student was a grizzly bear, and one student was a hunter. The hunter sang one line of the song as a solo, and the bear had to guess who it was!  It was fun to identify our classmates by their singing voices.

In third grade, the students played along with one of my favorite beginning of the year activities- "Hey Children."  The students learned the song first, followed by a clapping routine.  Once the routine was mastered, the clapping routine was transferred to the rhythm sticks so we could play the name game!  It was a lot of fun.

The fourth grade students learned a song called, "Rocky Mountain."  This song explores high and low voices, and was a bit tricky at first!  The song has a hand routine that goes along with it- we did the routine in whole notes (4 beats), half notes (2 beats), quarter notes (1 beat) and eighth notes (1/2 beat).  For the second class this week, we were able to use drums instead of our laps.  EVERY student had a drum to play!  It was fun to play and sing at the same time. Here is Mrs. Gonzalez's class performing the song:


In fifth grade, we sang an African song called "Sansa Kroma."  Ask your 5th grader about the meaning of the song!  Once we learned all of the words, we did a drumming activity similar to the one the fourth graders did with their song. Here is Mrs. Burn's and Mrs. Conceison's class performing the song from Ghana:


The 4th and 5th graders started chorus this week!  First, we got into height order to help everyone find their assigned spots on the risers.  Ask your child what our Winter Concert theme will be for this year! Please save the date! The 2016 Winter Concert that will consist of orchestra, band and chorus will be held on Wednesday, December 14th at 7:00pm. We will be sending a letter home next week.

We hope you have a fabulous weekend! It's apple picking season so I am sure many of you will be visiting a farm this month!
Posted by Mrs. Niu & Mrs. Rzasa at 8:30 PM No comments: