Wow, this week sure went by quickly!  Here's what we did:

The first graders continued to sing some songs for Thanksgiving, including "Over the River," "Thank You," and "Smells Like Thanksgiving."  They also played a bit of the "Bluebird, Bluebird" game!

The second grade students sang "Five Fat Turkeys," then practiced a percussion part to go along with the song in small groups.  Some of the groups even came up with a dance to do while singing!

In third grade, the students performed their routines for "The Turkey Shot Out of the Oven."  They were hilarious!  They are also starting to learn how to read music notation- we discussed what a staff is, as well as the treble clef.

The fourth and fifth graders had the first of their combined rehearsals!  Only 2 weeks left until the Winter Concert :)


I hope you have a safe and relaxing Thanksgiving!
Posted by Mrs. Rzasa at 7:54 AM No comments:

The concert information was sent home with all 4th and 5th graders on Friday.   I wanted to post it here too, just in case yours gets misplaced!  You can also find it permanently linked in the sidebar of this blog.

It's concert time again! Below you will find some information regarding our upcoming Winter Concert. Please don't hesitate to ask if you have any questions!

We look forward to seeing you there! 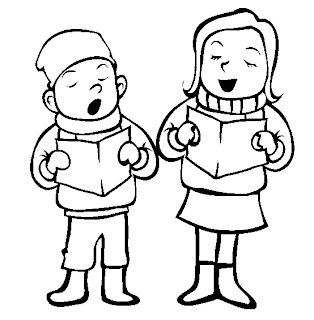 Today's lessons were fantastic!  Here is the assignment for the week, and please also check out the important information below!!

To Hold the Bow:
Start by making your little "shadow puppet," making sure to place the middle fingers over the thumb. 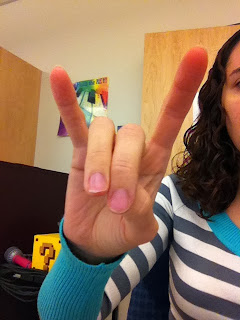 Following the steps I taught in class, hold the bow as shown below- the trickiest part will be that pinky! 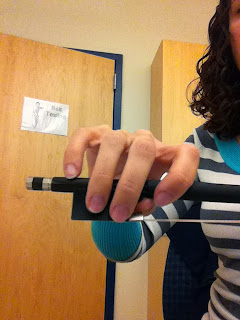 In addition to the windshield wiper exercise we practiced today, please watch these videos and give them a try:

These exercises should be fun, and also count towards your minutes of practicing! :)

When using the bow tube, please be sure to hold it firmly with your left hand on your left shoulder, and to place the bow inside carefully.  Keeping the proper position of your right hand on the bow, pretend to play the violin through your tube.  Your right hand wrist should be flexible to bend up and down as you bow.  To make it more fun, you can listen to some music while you practice! 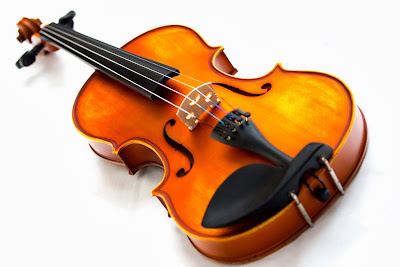 Wowza, such a short week!  Here's a brief explanation of what the students did in music:

The first graders learned a new song called "Smells Like Thanksgiving." It shares a tune with another familiar tune (ask your child if they remember what it is!), and each person in class was able to contribute by thinking of something you might smell on Thanksgiving Day.

The second grade students put their newly acquired mallet/Orff instrument skills to the test by playing an accompaniment to a song called "October is Over."  They also explored body percussion and hand percussion instruments.

The third grade students learned a hilarious song called "The Turkey Shot Out of the Oven."  It has a verse/refrain form, and I split the class into 5 groups, so that each group could be "in charge" of one of the verses.  Working as a team, they came up with a short routine to go along with their verse.  Next week, the groups will perform for each other, and in between the verses the entire class will sing the refrain!

The fourth and fifth graders continued to work on their music for the Winter Concert.  Be on the lookout for a handout soon with all of the details.  Thank you!
Posted by Mrs. Rzasa at 8:22 AM No comments:

Thank you so much to the parents who attend our Veteran's Day celebration this morning!

This week, the first grade students practiced speaking and singing with high and low voices.  We explored pitch by chanting "5 Little Monkeys" (using a high voice for the Mama and a low voice for the doctor), then played the Splat Game.  During this game, the students sing with their whole vocal range!  They also learned "Bluebird, Bluebird," and we played a circle game to go along with it.  At the end, everyone sings "Oh, Johnny aren't you tired?" and our pitch drops lower!

The second graders spent this week working on their mallet technique.  Students from Ms. McLaughlin's class wanted to share the different steps with you! 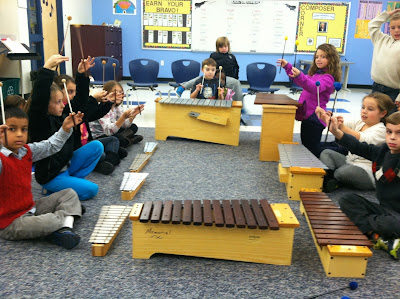 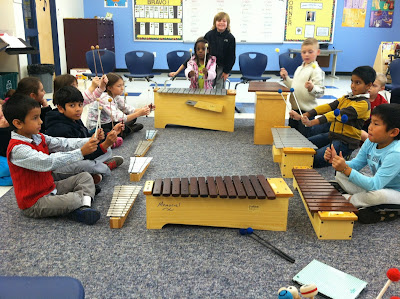 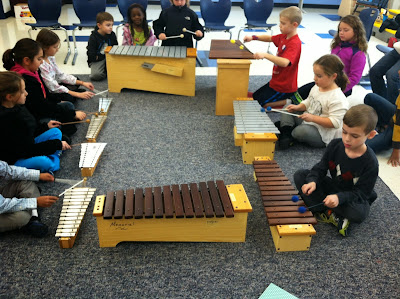 I asked the student what song they wanted to learn, and they chose "Twinkle Twinkle Little Star."  Below is a video of them practicing the first part of the song!

The third grade students learned a harvest song and sang about pumpkins, autumn breezes, and Thanksgiving!  Once they mastered the song, they were able to play an ostinato (accompaniment part) on the Orff instruments.  They reviewed mallet technique (just as the second graders did), and focused on playing with a steady beat and accurate rhythm.

The fourth grade students did an AMAZING job at the Veteran's Day assembly!  They sang the Armed Forces Medley with pride and spirit, concluding with the beautiful Star Spangled Banner.

The fifth graders have been diligently rehearsing their chorus music for our upcoming concert (December 11th!).  They are also helping us come up with dance moves and special parts to make the music even more entertaining and enjoyable.

We hope that everyone has a wonderful long weekend!
Posted by Mrs. Rzasa at 11:27 AM No comments:

Good afternoon!  Sorry that I did not write a violin post yesterday- the district's internet was down.

Below is the assignment for violin this week:


The students (with the exception of Cyr's group, who I will see on Friday) have tapes placed on the necks of their violins.  These tapes mark where each finger should be placed on the fingerboard to play in tune.  We will continue to review these in our next lesson.  Please note that next Monday is a holiday (Veteran's Day) so there will be no lesson.

Good morning, and Happy Friday!  For those of you who celebrate Halloween, I hope you had a safe (and delicious) holiday yesterday!  Here's what we did in music this week:

The first grade students continued to work on their decoding skills.  It is super tricky, and it might take them a while to get the hang of it, but I appreciate the effort the students put into it.  They also finished their "Autumn Leaves" activity with the scarves, and practiced rhythmic notation. They learned a new song about bats called "Flap and Fly," and they even decorated their own bats to use during the game!  It was a lot of fun!

I read a book to my second graders called "Old Devil Wind," about the sounds you might hear in an old home.  We paired each sound to a percussion instrument so that we could add sound effects to the story!  I will be posting the recordings next week! :)

The third graders sang the "13 Days of Halloween" in a minor tonality, and some students helped with the lyrics by holding up posters at the appropriate time during the song.  They also had a Halloween Sing-Along, and sang some favorite spooky tunes from first, second, and third grade.  It was a blast!

The fourth grade students are so close to being ready for next Friday's Veteran's Day assembly.  They have been learning the songs for each branch of the military, and are excited to perform for the school.

The fifth graders watched a clip from "The Nightmare Before Christmas" to prepare for their new chorus song.  You can watch it on our blog here!  They also learned about an amazing tone poem by Camille Saint-Saëns called "Danse Macabre."  Please check out my last blog post if you have not read about it already!

The students in chorus started learning their last song that we will be preparing for the Winter Concert (December 11th).  Fifth graders are working on "What's This" from the Nightmare Before Christmas, and the fourth graders will be singing "Hot Chocolate" from the Polar Express.

I hope you have an awesome weekend!