This week, the first graders learned a chant called "I Think Music's Neat." Learning this chant  has helped the students realize that the number of beats in a song or chant stays the same- even if you perform it with a different tempo! The students also added three percussions instrument to the song,"Thump, Thump, Thump."  A hand drum was played during the crescendo on the words, "Thump, Thump, Thump," a triangle was played on a quarter rest, and egg shakers were played on the spooky words, "Who's There?"

The second grade students read a story called "Old Wind."  There are many different characters in the story, and each was represented by a different instrument.  The students played the hand drum, sand blocks, ratchet, vibraslap, whip, glockenspiel, chimes, or made sound effects with their voices!
Here are their performances:

In third grade, the students listened to "Funeral March of a Marionette," by a French composer, Charles Gounod. A few students had the opportunity to move a skeleton marionette as we listened to the song. We also played a game called, "Pass the Broomstick" that reinforces steady beat. The song is in minor and to prepare for this, they sang a minor scale. Rhythm sticks were given to each student to represent broomsticks. Then they learned how to pass a rhythm stick along to the steady beat.  On the last beat of the song, whoever had two or more more sticks were out. 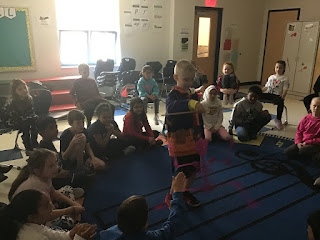 Fourth graders have finished preparing for the Veteran's Day Assembly.  The assembly is this Thursday, November 7th at 1:30 p.m.  Due to space limitations, ONLY the parents of fourth graders may attend.  As a reminder, if you would like your child to be dismissed with you, they must send in a note that day. The front office is VERY strict about this policy. Thank you in advance! 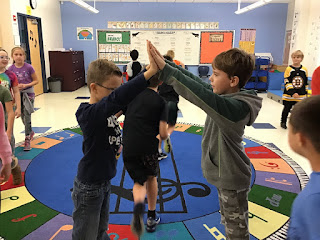 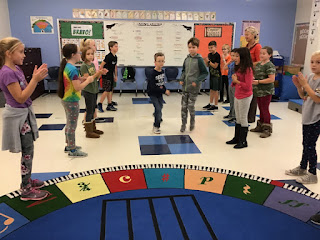 Fifth grade students started to learn a song called "Halloween Night."  We discussed the song's tonality (minor), and reviewed how to read a musical score.  They had just enough time to learn two different xylophone parts, and we will continue playing next week.

Have a Spooktacular weekend!
Posted by Mrs. Niu & Mrs. Rzasa at 8:17 PM No comments:

This week in music, the first graders sang a spooky song in minor tonality called "Ghost of John." The students danced around the room pretending they were ghosts as they sang. Next week, we will try singing this as a round! They also sang a call and response song, "The Bats are All Asleep," which helped demonstrate dynamics: piano, forte, crescendo, and decrescendo. In their second music class, they learned another call and response song called "Skin and Bones." It was funny AND spooky! 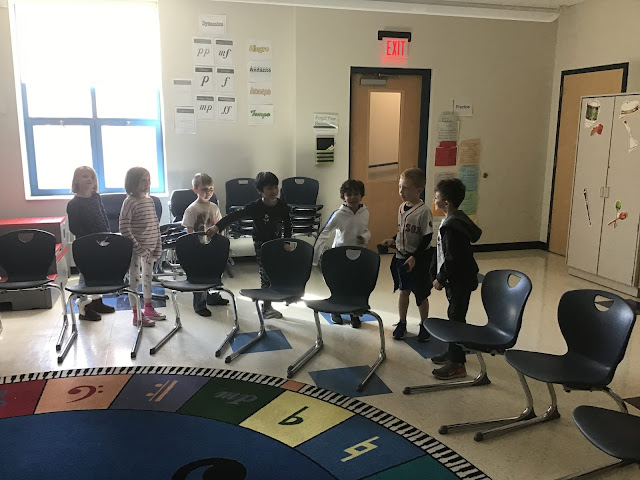 The second graders learned a fun October activity called, "A Funny Little Lady." After students learned the song, they played a game where one student closed their eyes and sat in front of an imaginary door. Their job was to guess who the soloist was when a particular part of the song was sung. They also sang "Skeleton John" in unison, then as a round. Practicing simple part singing like this will help them when they get to chorus in fourth grade! In their second music class, they learned a song called "Witches' Stew," then added an activity with hand percussion sound effects. Students got a chance to pick various funny percussion instruments and played them on the words "Ew," "Ick," "Ugh," and "Yuck." The students really enjoyed it! 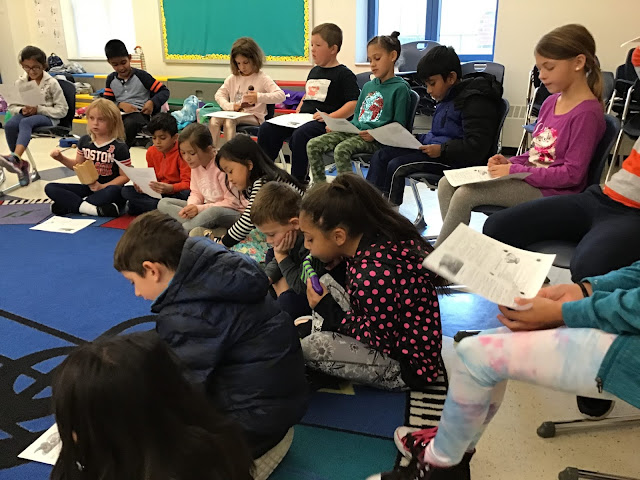 The 3rd grade students had a great time using the Orff instruments this week.  They first sang the minor scale (based on "la"), then learned "Nine Lives."  Of course, the song is about a cat so we had pictures of black cats all over our music!  They played an ostinato pattern on the instruments (xylophones, metallophones, and glockenspiels) to accompany the tune. They also played a game to go with the song "Ghost of John" which was taught to them by a fellow student! Thanks for teaching it to us, Dylan! 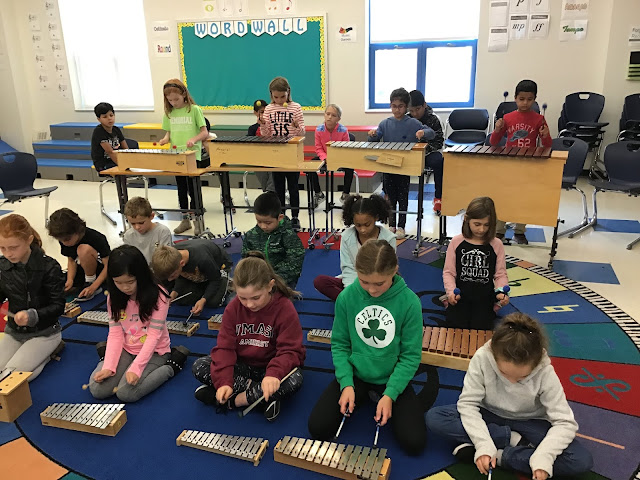 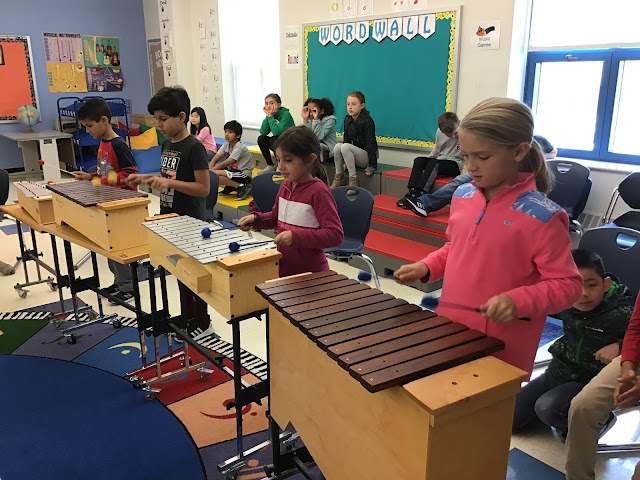 The fourth graders have started to prepare for their Veterans Day assembly.  They will be singing an Armed Forces medley, which goes through the songs for each of the five branches of the military.  Fourth grade parents: please mark your calendars for Thursday, November 7th at 1:30pm - we can't wait to see you there!

The fifth graders reviewed the Bridge of Athlone dance from last week. Here is a video of some of the students dancing!

Then, they learned a new folk dance called The Boston Tea Party. It is a tricky dance inspired by the time of the Boston Tea Party, which took place in 1773. It was interesting to compare and contrast the Irish dance with the American one.

In chorus, the students continued to rehearse their music for the winter concert. Hope everyone had a great week and weekend!

This week, the first graders reviewed the Loose Tooth chant, then switched their body percussion movement to hand percussion accompaniment! 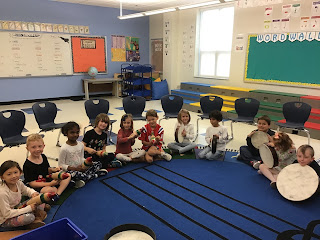 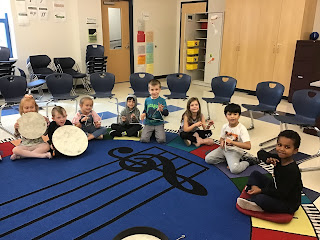 We also played a fun moving activity called, "Looking for Dracula." Ask your first grader about this fun activity!

Our second grade students did many variations of Come and Follow Me including body percussion and singing the song in a two and three part round.

Students also continued listening and moving to the song: The Night on Bald Mountain.  Here is a video and pictures of students performing their dance: 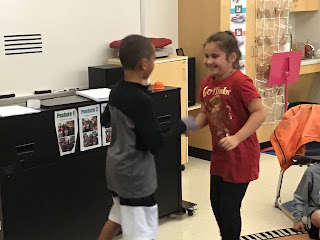 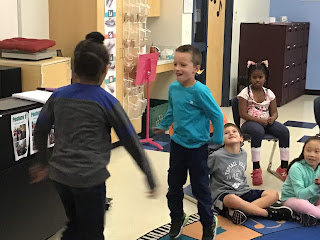 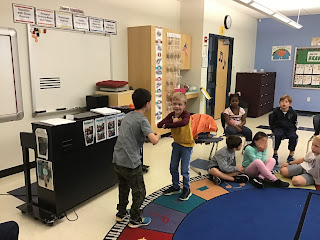 We learned a fun October activity called, "A Funny Little Lady." After students learned the song, they played a game where one student closed their eyes and sat in front of an imaginary door. Their job was to guess who the soloist was when a particular part of the song was sung. 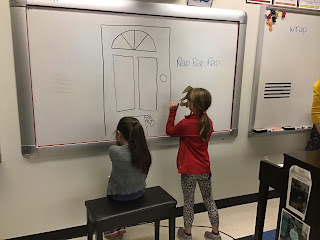 Students also learned another song about a cat called "9 Lives."  Before we sang the lyrics, we sang the song with solfege syllables, starting on "la" - since the song is in minor tonality!  Then, we reviewed proper mallet technique for the Orff instruments.  Students had the opportunity to play a simple ostinato on the xylophone, metallophone, or glockenspiel. Next week, students will learn to play the melody on the Orff instruments.


The fourth graders started learning a new folk dance called "Bridge of Athlone."  They first found Ireland on the map, then talked about the history of that famous bridge.We will continue this dance next week.

Fifth grade students reviewed the "Bridge of Athlone" dance from last year. Next week, they will learn the Boston Tea Party Dance.

Have a wonderful three day weekend!
Posted by Mrs. Niu & Mrs. Rzasa at 8:51 PM No comments:

Last week in music, the first graders finished their Apple Tree song and game. It was so much fun! Then, they learned an echo song in minor tonality called "Oh My." The students practiced singing in a large group, in a duet, and as a solo!

So many of our first grade friends are beginning to loose their baby teeth, so we wanted to teach them a little chant called "Loose Tooth." This chant had body percussion parts for the following words: loose tooth - two claps, wiggly jiggly - alternating pats on your knees, and bed/head/thread - snaps. Next week we will transfer these body percussion movements to three different instruments!

The second grade students enjoyed working on a challenging song called "Come and Follow Me."  Each phrase is sung a little bit higher than the last, with one phrase ("singing together, as one!") completing each part. Once it is mastered, we will sing it in a round! Since it is October, we listened to a spooky piece of classical music by Mussorgsky called "Night on Bald Mountain." The students first listened to the composition with their eyes close and had to describe the music. Then, each student performed their own interpretation of the song with their partner. One student was the leader and the other student mirrored the movement of the leader. Partners came up with their own "secret code" and when it was performed by the leader, the other student became the leader. Next time, the class will have to guess the secret code for each pair!

In third grade, we played an elimination game with the song, "Dipidu" that we learned last week. Students had to find a new partner right after section B, and at must be someone that they have never been paired up with before. Then, the students reviewed rhythms in duple meter: quarter notes, eighth note pairs, and quarter rests. Next, they learned a new rhythm: sixteenth notes! They sang a song called "Ding Dong" to help reinforce each rhythmic value, and read the rhythms on the musical staff. To complete the activity, each rhythm was transferred to a different percussion instrument for the students to perform. 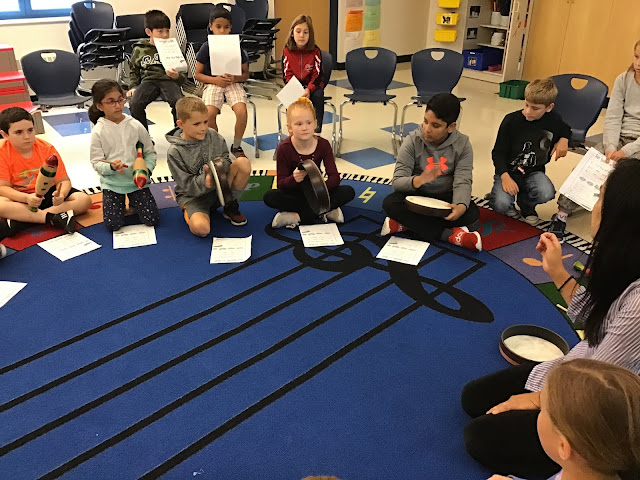 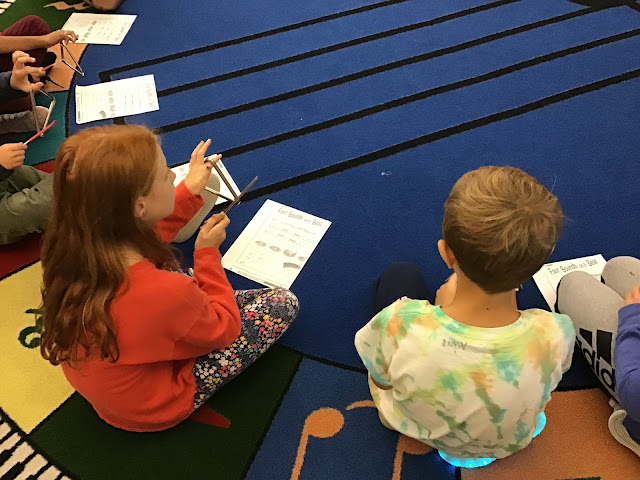 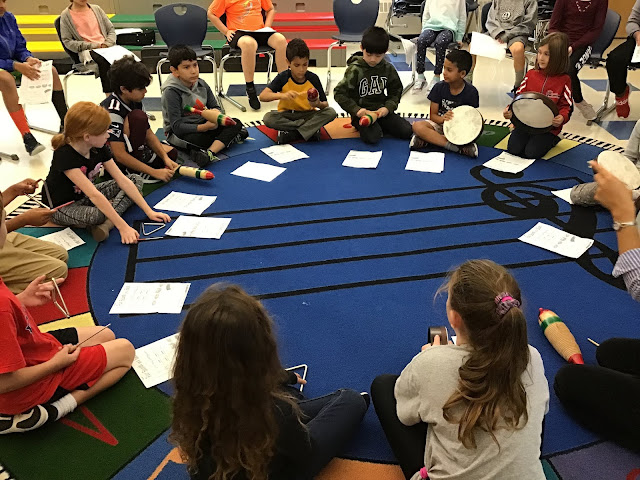 The fourth and fifth graders enjoyed practicing and performing their different cup games. In chorus, they reviewed their grade level featured songs, and started to learn one of their combined pieces.

And here are some photos of the fourth graders on their orchestra instruments! 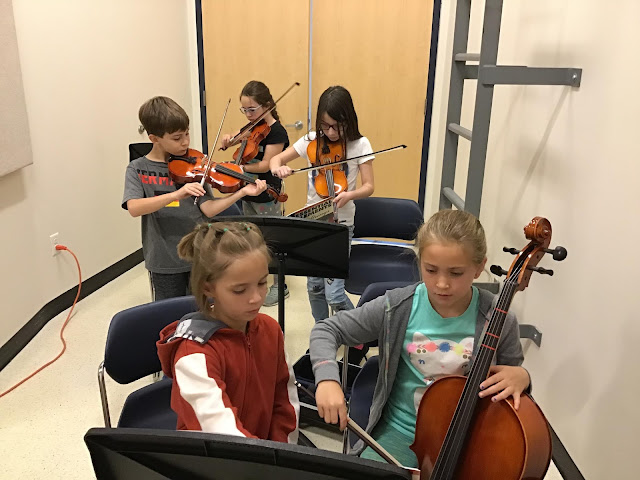 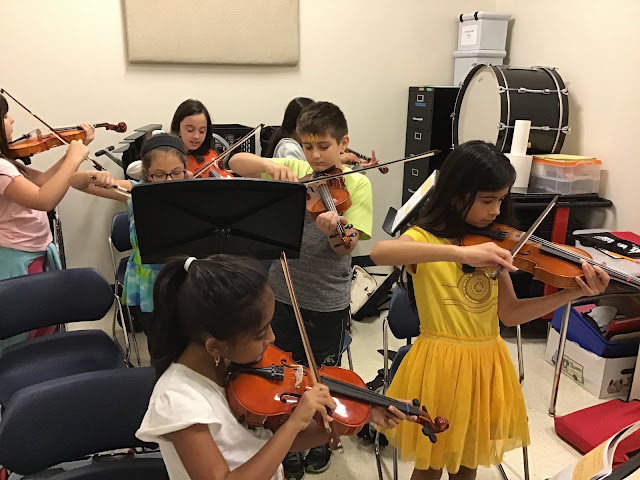 Hope you had a great weekend!
Posted by Mrs. Rzasa at 11:05 AM No comments: