This week in music, the first graders continued their Peter and the Wolf unit! They completed their listening maps, and then were rewarded by watching the Peter and the Wolf movie! We don't watch movies often in music class, but this one is a great way for the students to connect the story with the music.

The second graders reviewed the two songs they learned last week, Jim Along Joe and Do What I'm Doin'. The activities which accompany these songs are so much fun! Then, we continued the instrument family unit by reading about the woodwind family.

The third graders took their notation test this week. They did a fantastic job! Now that they have mastered the notes and symbols on the staff, they are ready to start the recorder next week! If your child is using a sibling's instrument, please have them bring it in on their music days.

They also played a hilarious game, Music Staff Twister! Instead of placing their hands and feet on colored dots (like in regular Twister), letter names are called out and they need to place their limbs on the corresponding lines and spaces! If they fell or got a note wrong, the other team would score a point. It was so much fun! 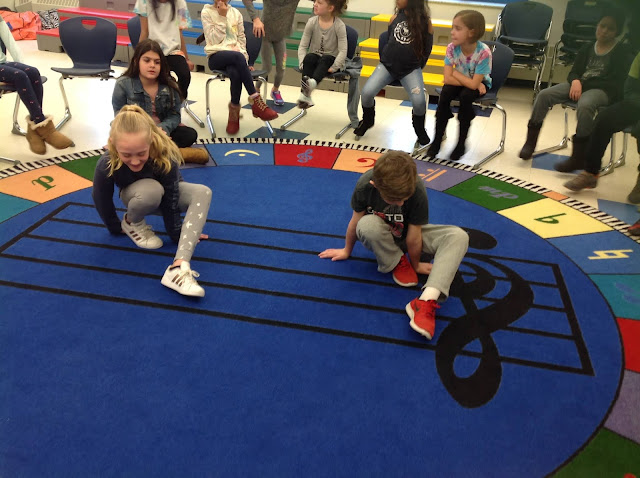 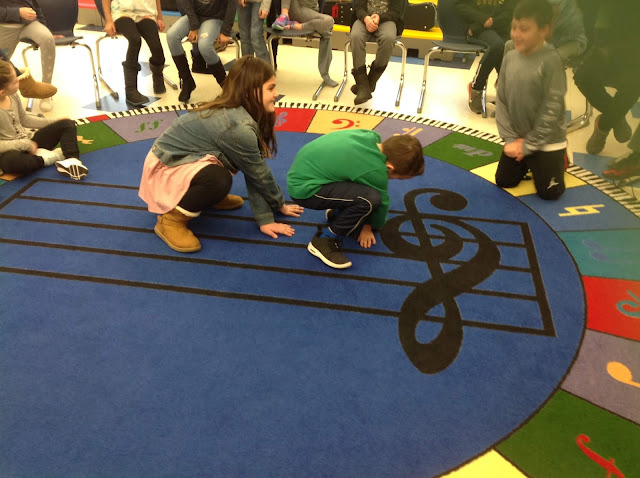 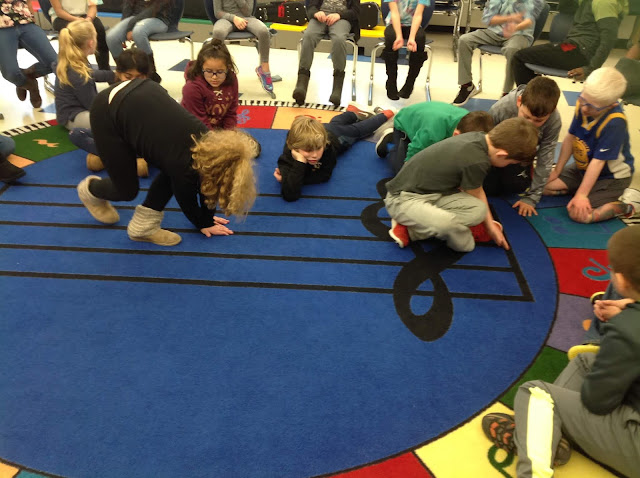 Today, the third graders went on a field trip to see the Lexington Symphony perform. You can read our blog post about it (with many photos) HERE.

The fourth and fifth graders completed their tone chime unit, with their final in-class performances of Auld Lang Syne and Take On Me. Next week, they will start the ukulele unit. We were generously given ukuleles by donors through Donors Choose. We are so grateful to have the instruments to use with the students in class!

In chorus, the students worked on their grade level songs as well as the Hand Jive. We will continue next week!

Hope you have a fantastic weekend!
Posted by Mrs. Rzasa at 11:21 AM 1 comment:

Wow!  The third graders had an awesome time this morning on their field trip!  We visited the amazing Cary Hall to see the Lexington Symphony perform! 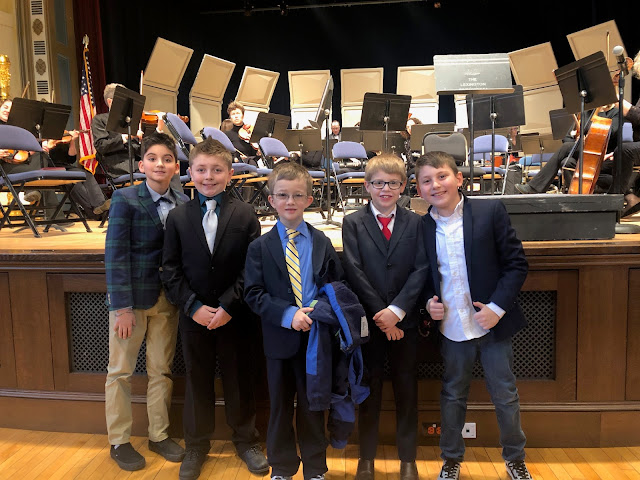 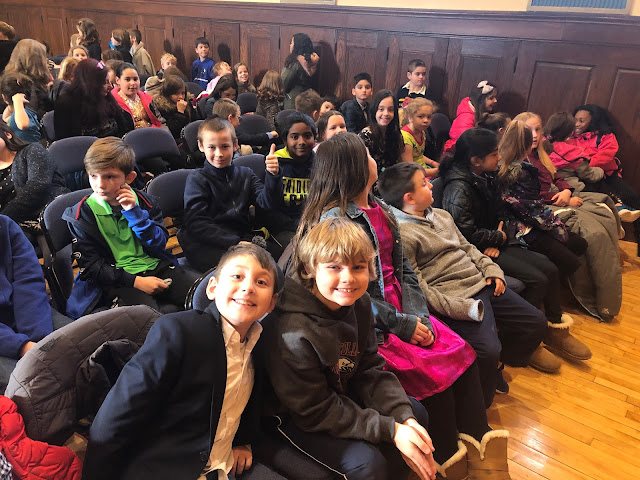 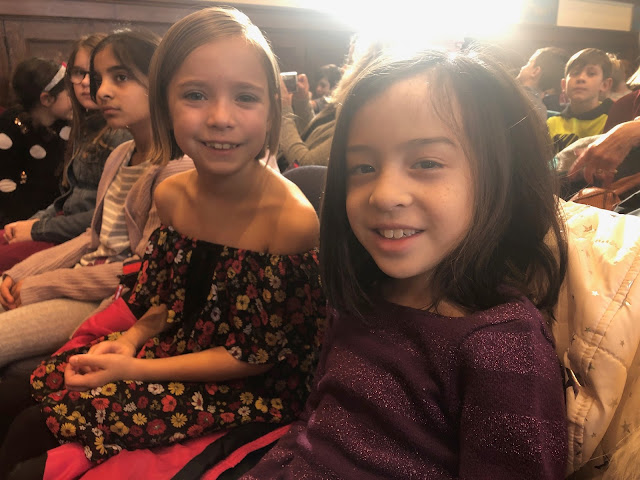 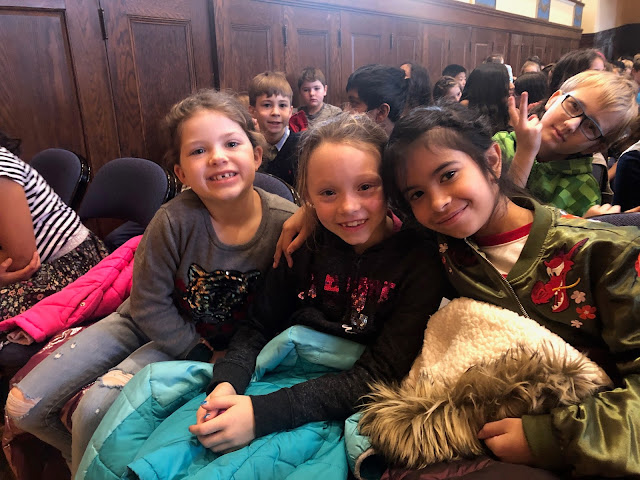 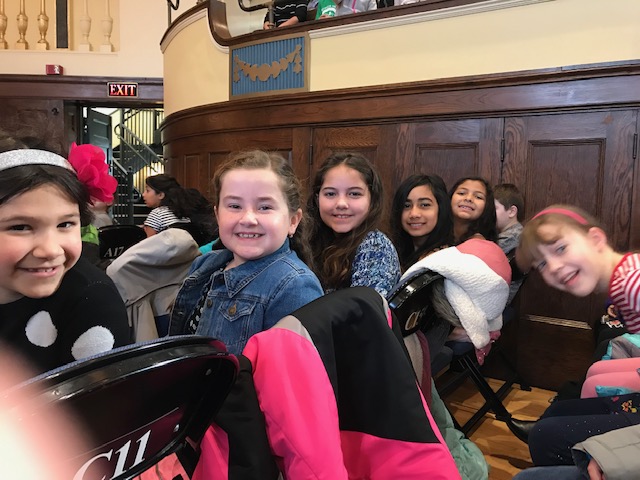 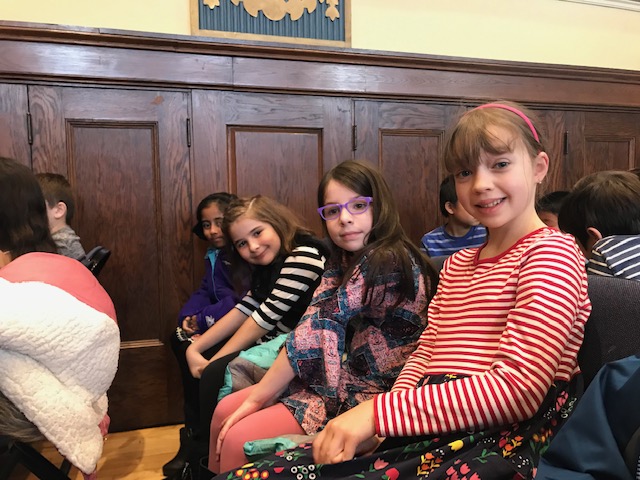 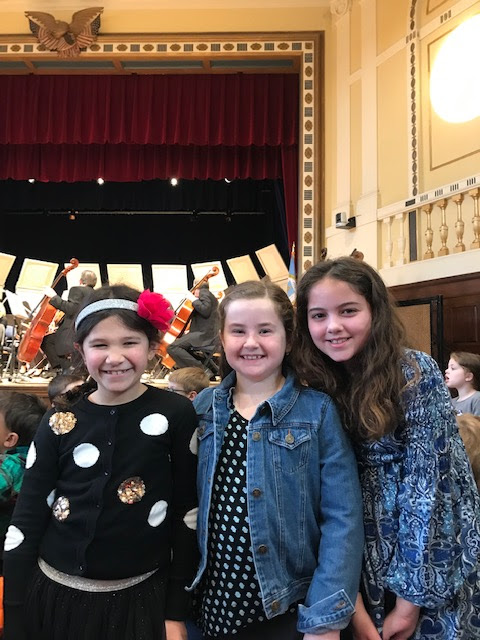 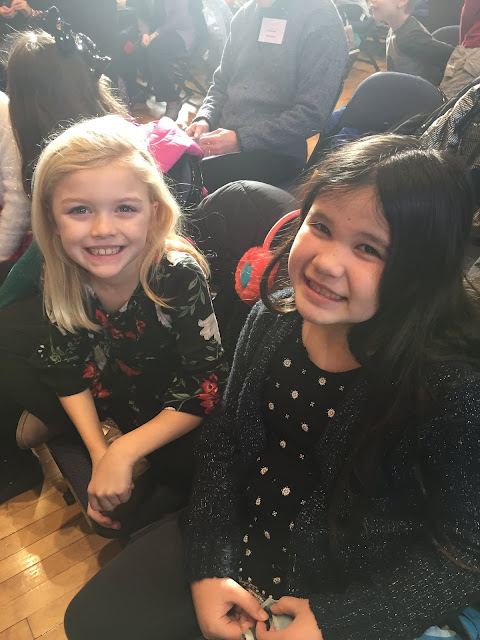 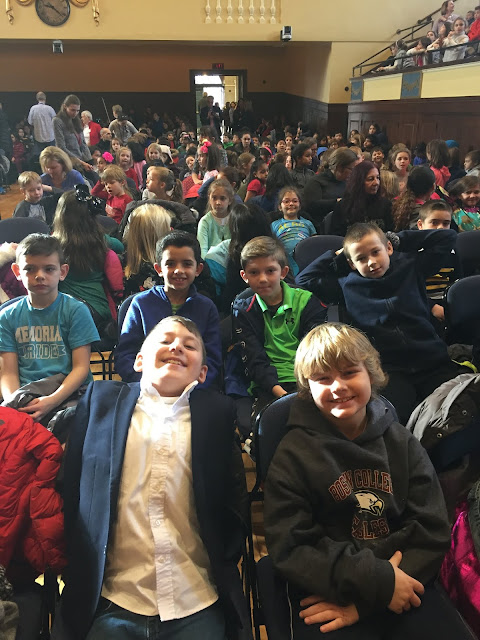 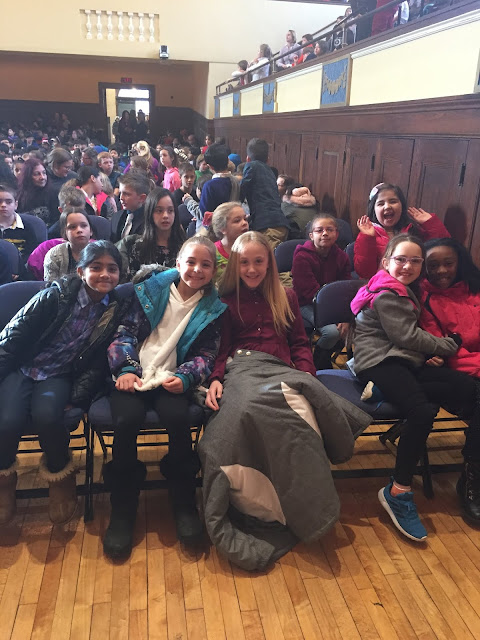 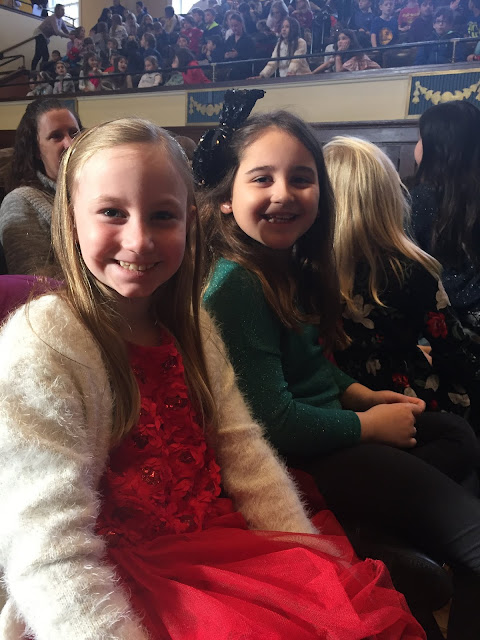 The student saw a few familiar faces in the orchestra - from when the symphony's quartet visited Memorial. 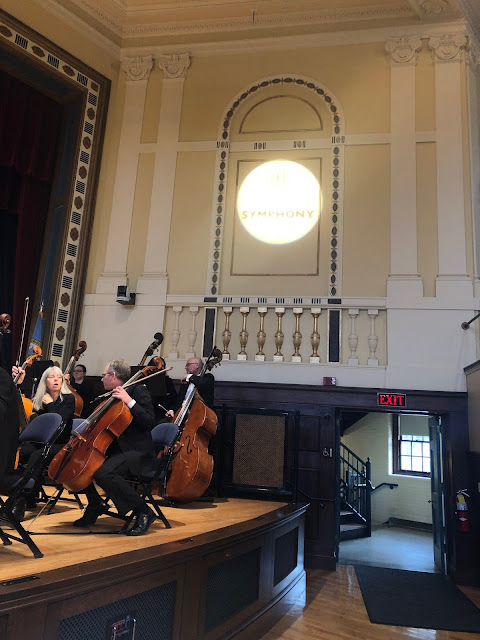 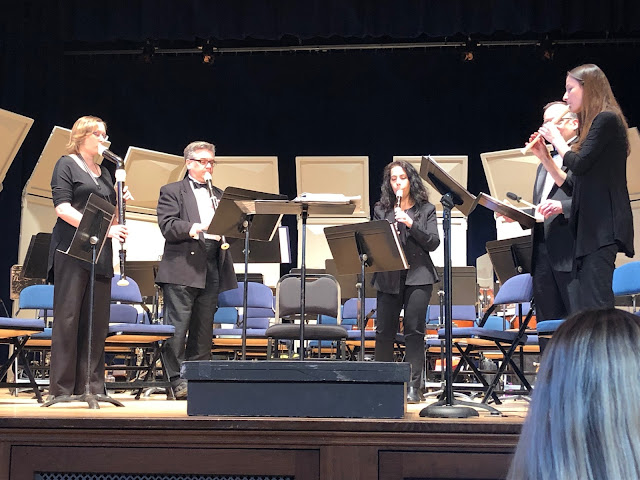 The students were taken on a musical journey through time, starting in the year 900.  Music was primarily vocal (sung by voice) until the Renaissance, when recorders and drums were popular.  Little by little, instruments were added... 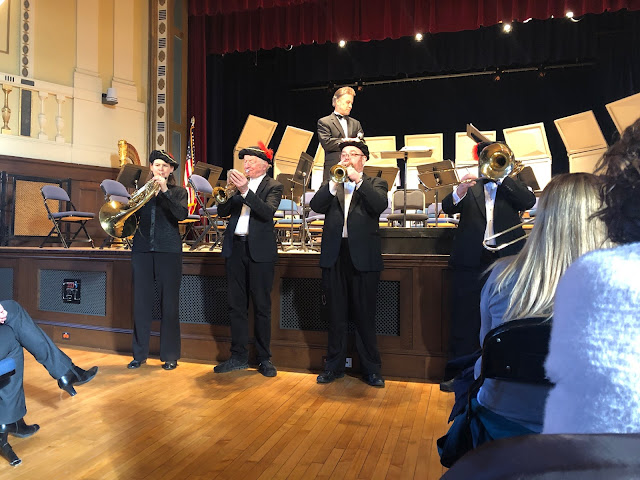 ...such as violin, viola, cello and bass (very common in the Baroque period). 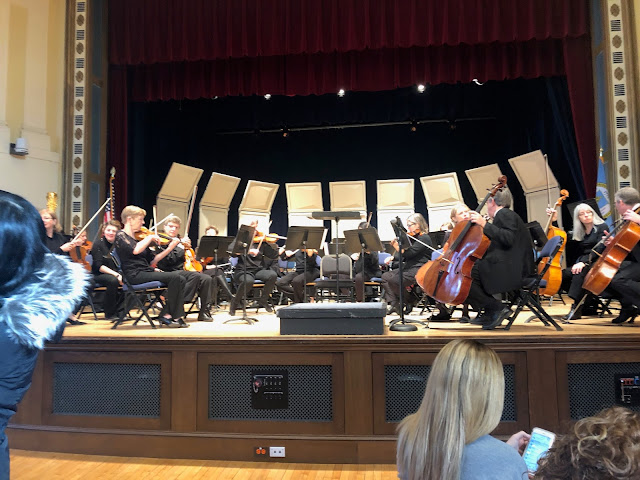 In the late Baroque and Classical periods, concertos were performed!  The students heard an amazing concerto movement by a young cellist. He is so talented! 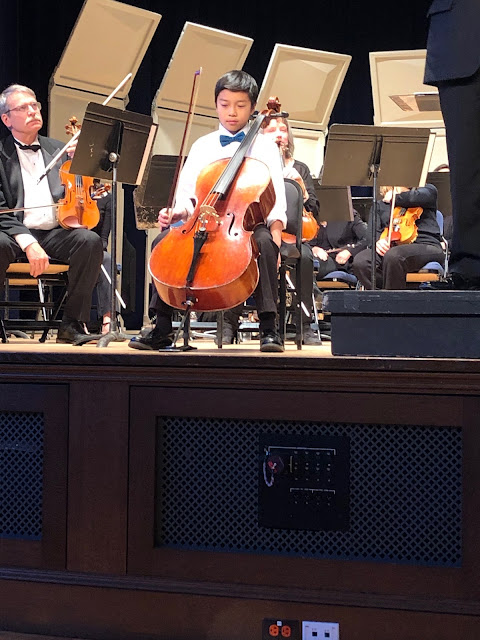 In addition, more wind, brass, and percussion instruments were added to the ensemble!
Pretty soon, everyone was on stage, and the students were introduced to some lesser-known (but still important!) instruments such as as the contrabassoon, bass clarinet, and English horn.

By the end of the concert, there was a full modern symphony orchestra on stage!  As a finale, they played a medley of Star Wars, composed by John Williams.  This was certainly a favorite!

Big thanks to the parents who volunteered to chaperone- we hope you had fun too! 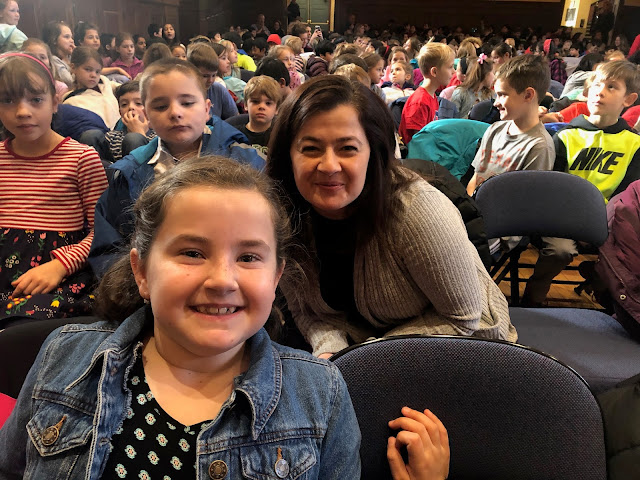 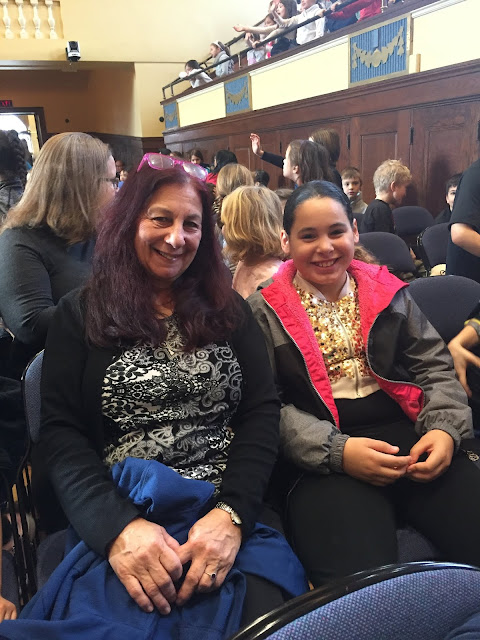 Before heading off to a three day weekend, please take a moment to check in to see what we did in music this week.

Our first grade students will be studying Sergei Prokofiev's "Peter and the Wolf" for the next few weeks.  "Peter and the Wolf" is a story and musical piece by the Russian composer.  We read the book first, then started a listening map in the second class.  As the students listened to the story and orchestral music (narrated by Patrick Stewart), they completed the activities in each box.  Each part of the map included a fun activity, such as drawing the different characters and identifying different instruments. We will be finishing this activity next week. Here is a list of all the character in the fairytale. Each character in the story represents an instrument and has a musical theme:

Here are also some first grade students working hard on their map: 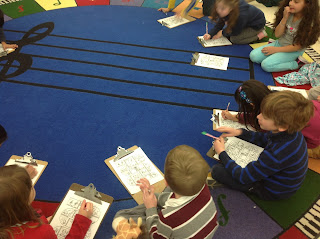 The second graders started a learning a new movement activity called " Jim Along Joe." The title of the song means to "come along." Students substituted different movements as they sang the song while walking around in a big circle. They also started a new unit on instrument families.  The four main instrument families are: brass, woodwind, string, and percussion. This week the students learned about the brass family.

Third grade students are preparing for their recorder test next Tuesday and Wednesday. If you child still needs extra help, please let us know! We will also be going to Carey Hall in Lexington to watch the symphony perform on Friday, January 25th. The bus will leave at 8:45am and we will be back around 11am. We highly encourage your child to get dressed up for the performance. They are more than welcome to bring a change of clothes.


The fourth graders learned"Auld Lang Syne." The song is traditionally sung on New Year's Day, at midnight right after the ball drops.  The song reminds us to remember our old friends and fond memories as we approach the new year.  The song sounded great as we sang it, but it will sound even better with chordal accompaniment. We will be playing the accompaniment next week so stay tuned!


Here are what tone chimes are:

Have a wonderful long weekend and stay warm!

This week in music, the first grade students learned a silly movement chant called "Hands, Hands." We warmed up our cold bodies by moving just one body part at a time. We also sang a winter song called "I Have a Little Snowman."  It explores movement and pitch in a scale.  As the song continues, the pitch of the song rises, and when the snowman melts the pitch returns back to the starting note (do).  After we reviewed our solfege tones, we learned a fun song and game called "Doggie, Doggie." One student played the part of the dog who was sleeping in the middle of the room while another student distributed the bone to one person in the room as the class sang the song. Whoever had the bone on the phrase, "Who stole the bone?" got to sing the solo part of "I stole the bone!" It was so fun to see students guessing who they thought had the bone.

The second graders reviewed a musical term from last year: tempo.  Tempo is the speed of a piece of music. We practiced listening and moving to various tempos with a song called "Freight Train." Students also had a chance to compose a "tempo story." The class chose a topic, then as each part of the story was added, students determined its tempo: adagio, andante, or allegro (slow, medium, or fast).  Then, we "performed" the story on percussion instruments, following the changing tempos.  It was so much fun! 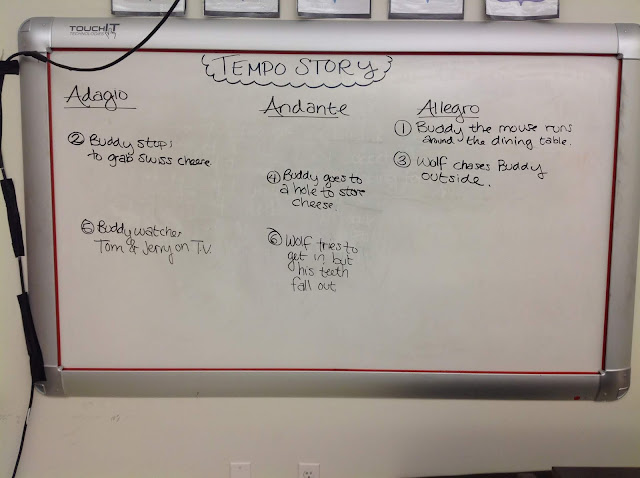 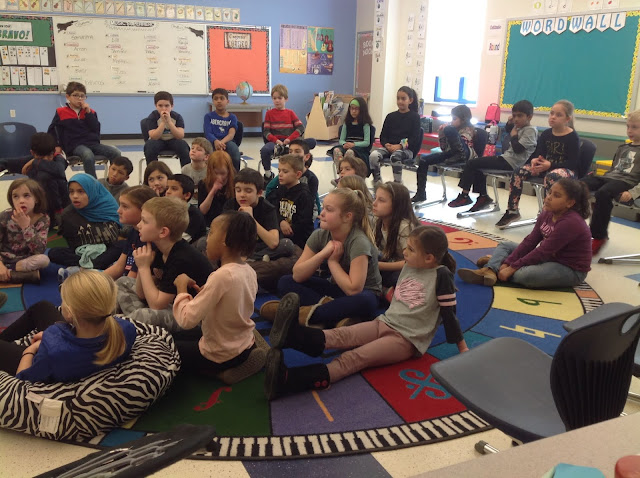 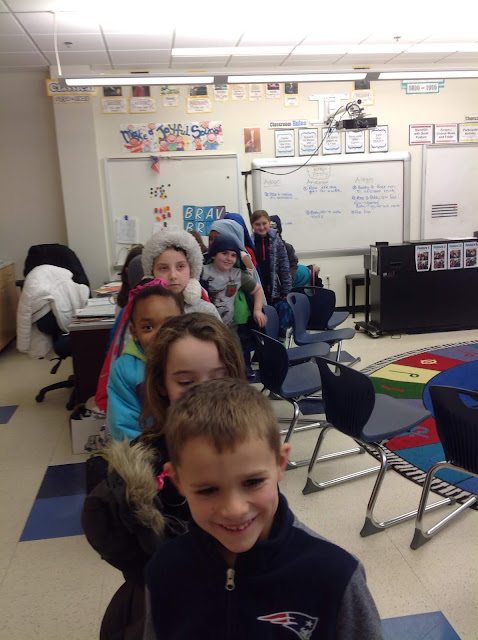 To prepare for their upcoming field trip, the third grade students had an exciting visit on Tuesday from four members of the Lexington Symphony Orchestra. Students got up close and personal with the violin, viola, clarinet, and trombone. The performers played beautiful music and taught us about their instruments.   We discussed the four instrument families (string, brass, woodwind, and percussion), and learned a little bit about concert etiquette. 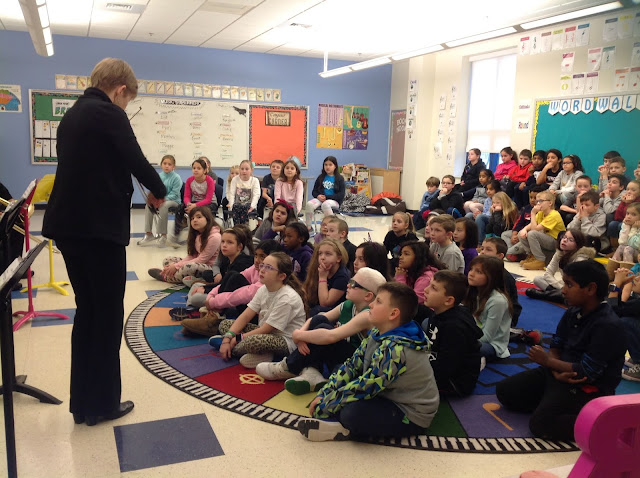 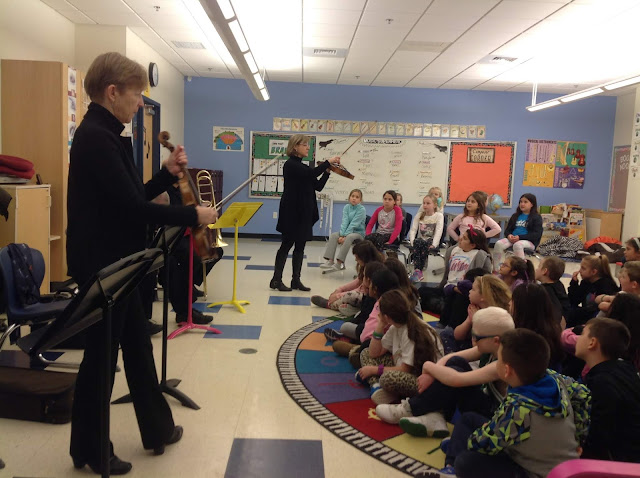 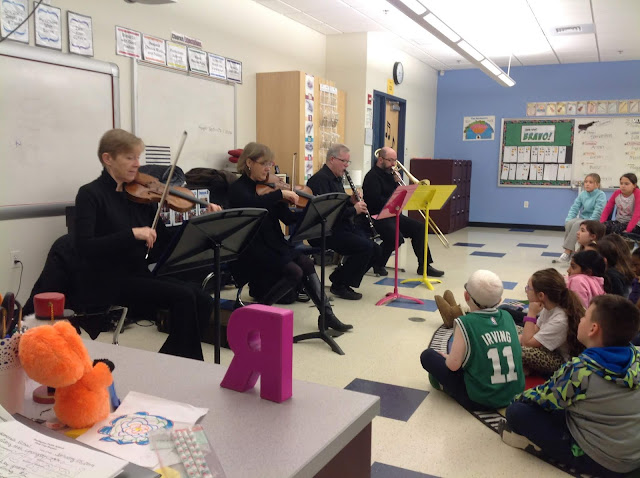 The fourth and fifth grade students started a new unit - chords!  A chord (unlike a pitch or interval) is a group of three or more pitches played at the same time.  There are MANY different chords in the music world, but we focused on chords with three or four notes.  We explored the different tonalities that the chords can possess, and a process for building a chord that will sound good every time!  Once everyone knew how to build a chord, we used the classroom floor staff to learn how to notate and label them.

In chorus, the students downloaded the new songs for our spring concert!