Fourth Graders
4A, 4B, 4C:  Today we played our D scale in a round with the rhythm "du du-de," then rehearsed Jingle Bells and Autumn Rhumba.  The students came up with silly phrases to help them remember the rhythm patterns.
Assignment for 4th graders:

Fifth Graders
5A and 5B:  Today the 5th grade violinists spent time working on a VERY tricky part of Saint Nick's Canon on the Housetop.  We worked out the fingerings for the E string notes, including G natural...low 2!  The cellos and violas rehearsed Dreidl Adventure.

Congratulations to all our 4th grade students who sang so beautifully at our Veteran's Day Assembly! Mrs. Rzasa and I received a lot of compliments commending you all for your hard work!

Our first graders learned a Thanksgiving song called, " Hello Mr. Turkey How Are You?" Every time we sang the phrase, "hello Mr. Turkey," we had to find a new friend in the room to shake hands with. It was also fun to gobble and wobble like a turkey. We also learned a song called, "Over the River and Through the Woods." It is also a children's classic which we read in class last week. After learning the first verse of the song, the students learned how to sing the song in sign language. Here is a video of Mrs. Burnham's and Mrs. Panag's class singing and signing the words with their eyes closed!

This song will be featured in our 1st grade Musical Showcase on Wednesday, Dec. 21st @ 1:30pm.

Second grade students performed a tango to the song, "Turkey Tango." A tango is a partner dance that originated in Argentina and Uraguay.  Then we played a game to the song where students had to pass a ball around. When the music stops, whoever has the ball gets to pick a feather from one of the turkeys. There was a rhythm turkey and a dare turkey where students had to act what was written on the feather. It was so much fun!

Third grade students learned about verse and refrain form while singing a hilarious song called "The Turkey Shot Out of the Oven"(to the tune of "My Bonnie Lies Over the Ocean").  There are 5 verses in this song, and each was assigned to a different group of students. The groups will act out each verse next week. Stay tuned! These third grade students also danced to the "Turkey Tango." 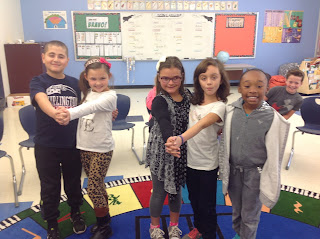 Thank you to all the 4th and 5th grade students who auditioned for the solo and dance parts. It was such a hard decision for Mrs. Rzasa and I! We rehearsed all the winter concert songs this week. You can find the lyrics and the recordings here:  2016 Winter Concert

The design covers for the winter concert were given out this week. Don't forget to turn them in by Wednesday, Nov. 30th.

Have a wonderful weekend!
Posted by Mrs. Niu & Mrs. Rzasa at 9:46 PM No comments:

Fourth Graders4A, 4B, 4C:  All fourth grade groups worked on Jingle Bells today, which is #41 in the lesson book.  We will be adding this tune to our Winter Concert!Assignment for 4th graders:


Fifth Graders
5A and 5B:  Due to an exciting Star Lab science lesson, we ended up combining both 5th grade lesson groups into one lesson.  Today we worked on Dreidl Adventure, a new song in minor tonality!

Song Recordings:  These can help you practice!!
Salamander Samba
Autumn Rhumba
Saint Nick's on the Housetop
Posted by Mrs. Rzasa at 9:18 AM No comments:

Email ThisBlogThis!Share to TwitterShare to FacebookShare to Pinterest
Labels: strings

For those of you who celebrate Halloween, we hope it was safe, fun, and you didn't eat too much candy! :)

This week, the first graders completed their Halloween activities from last week.  We moved to "Looking For Dracula," sang "Ghost of John" (in unison and as a round), and heard a spooky story as we sang "Woman All Skin and Bones."  Then, the students learned how to read the rhythmic notation for du and du-de.  We have been echoing rhythmic patterns since September, and now we can read them too!  We also read a story to them - Over the River and Through the Wood - then introduced the Thanksgiving song.

The second grade students are also starting to learn music for Thanksgiving.  We sang all about "Five Fat Turkeys" and how they were scared of the cook that was looking for them!  Then we added two spoken ostinato parts.  Then, the students learned how to transfer the ostinato patterns to the Orff instruments.

In third grade, we finished our "Pass the Broomstick" game from last week.  Students who were eliminated got to reinforce the steady beat by playing on the egg shakers.  Then, they learned a song for the autumn season called "Pumpkins are Ripe."  The song is in minor tonality, and has a beautiful melody.  Once the song was mastered, we added two different ostinato patterns on the Orff and hand percussion instruments.

The fourth graders finished their Halloween song from last week, Black and Gold.  It was so much fun to play on the instruments in minor tonality. Then, they continued to rehearse their music for next week's Veteran's Day assembly.  Fourth grade parents/families - we would love to have you join us on Wednesday, November 9th at 1:15 p.m.

The fifth grade students had a blast performing Halloween Night.  Some students played an ostinato pattern on the Orff instruments, while others played a scale-based melody.  Then, we had a group playing on hand percussion instruments.  The rest of the students pretended they were witches, skeletons, and goblins in a graveyard who came to life to spook the instrumentalists!  It was SO much fun to do each part, so we rotated to give everyone a chance to try them all.

In chorus this week, we focused on "Jingle Bells Rock" and "Rock and Roll is Here to Stay."  Please visit this page to find lyrics so you can practice at home.  We will also add some recordings soon!

We also had our first 4th and 5th grade combined orchestra rehearsal this week. Check out their warm-up!

We hope you have a fantastic weekend!
Posted by Mrs. Rzasa at 9:33 AM No comments: