This week in music, the first grade students reviewed their new rhythm syllables, du and du-de. They played Poison Pattern, a game to work on their rhythms AND listening skills. Then, we talked about what makes a chant different from a song. In a chant the students use their speaking voices, and they use their singing voices for a song. We finished off the week's lessons with a chant called "Loose Tooth." Three body percussion parts accompanied some of the words - "loose tooth" (two claps), "wiggly jiggly" (pats on your knees), and "thread," "head," "bed" (snaps). We extended the activity by taking out these words and only using the assigned body percussion when we sang these words in our heads. Lastly, we transferred the body percussion to the hand drum, guiro, and triangle. 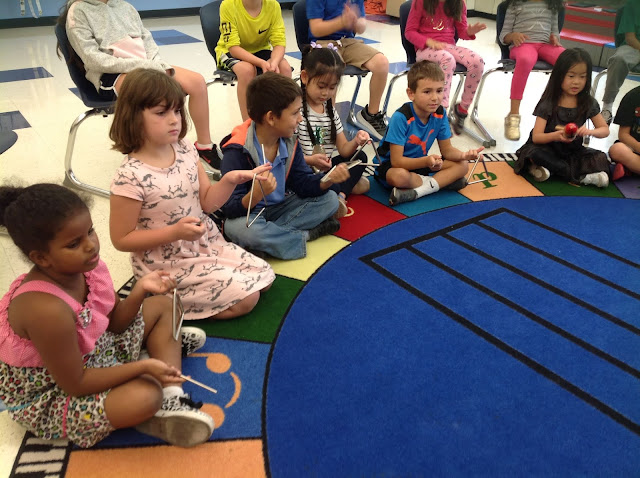 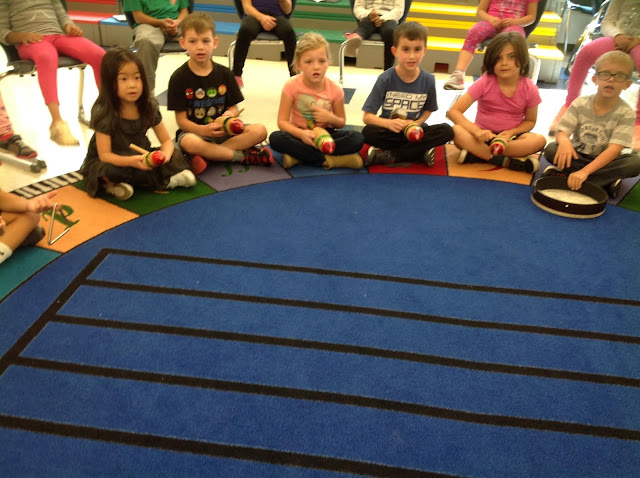 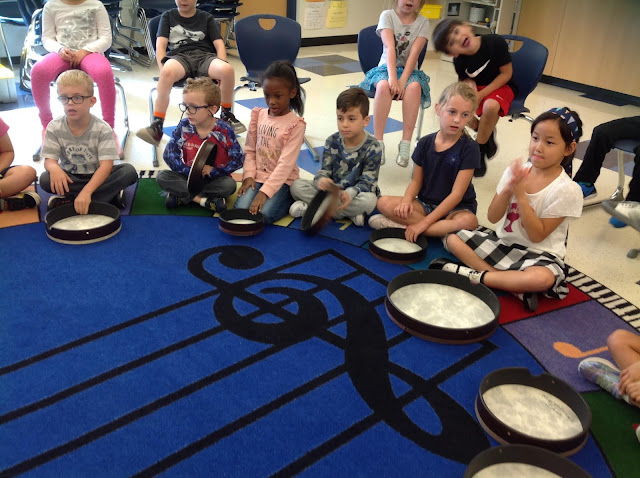 The second graders competed in Rhythm Telephone, a game to reinforce steady beat and rhythm. Then, they finished their Ickle Ockle game from last week. It was so much fun! The students also participated in another activity called "Old King Glory" - as they sing the "king" taps on 3 students, and the third one gets to be the new king (or queen!). Lastly, they learned "I'm a Nut" and added a rhythm stick part. Next week, they will compose their own verses!

The third graders reviewed quarter notes, eighth note pairs, and rests - then they practiced rhythm flash cards. We also sang "Four White Horses," a traditional Caribbean folk tune with awesome steel drum accompaniment! Once the song was mastered, we added a fun clapping routine. Quartets of students clap the hands of the person across from them (either high or low) then clap the hands of their neighbors to the sides. The routine repeats with regular hand claps in between each move, and alternating between high and low. It is a little tough to get the hang of it, so we will continue this activity next week! 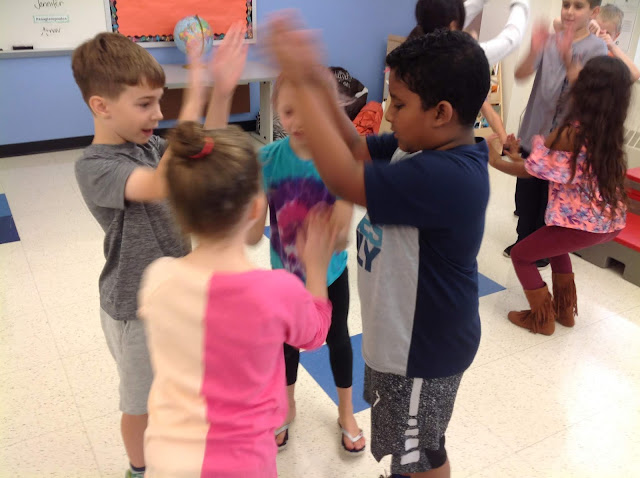 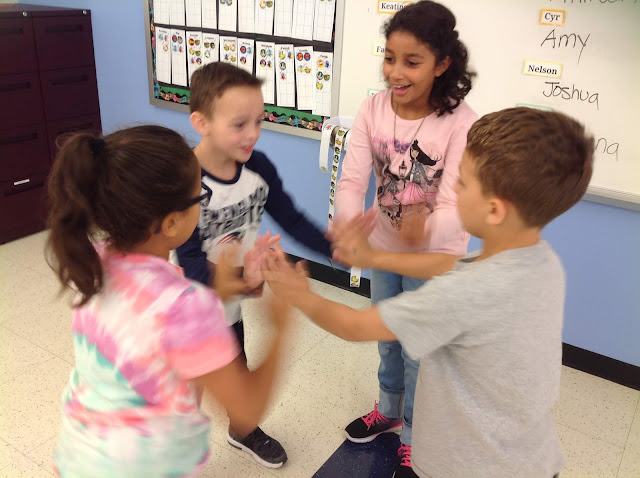 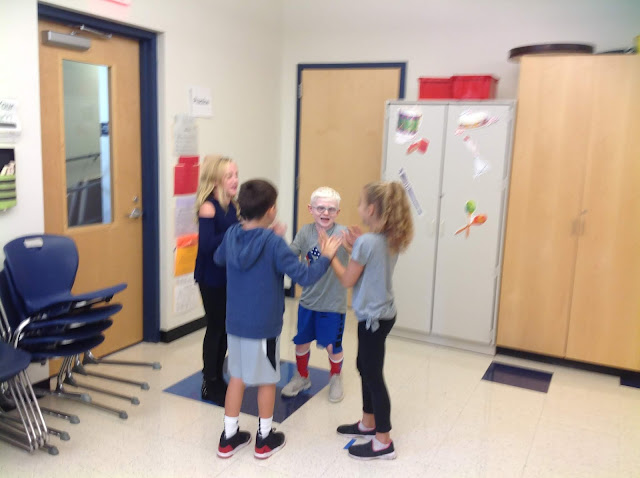 Today was picture day, so Mrs. Ferullo's students took a few photos in music class to show off their nice outfits! 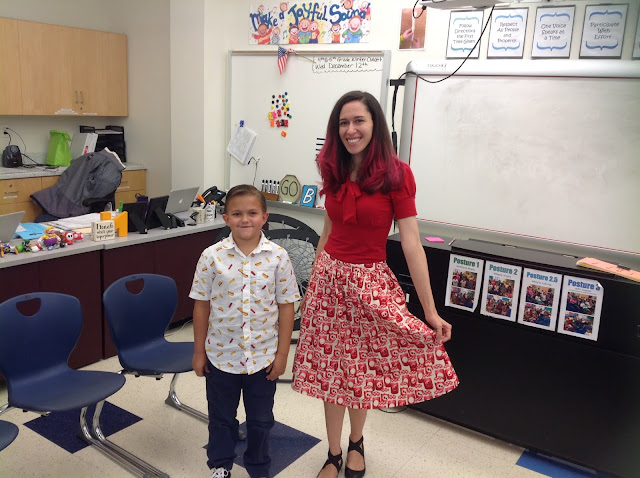 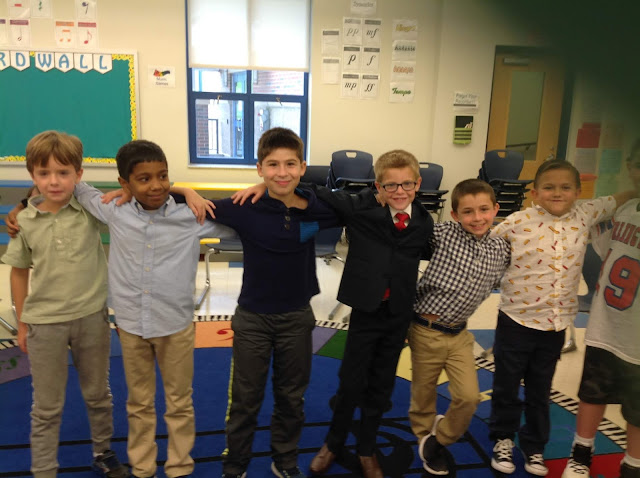 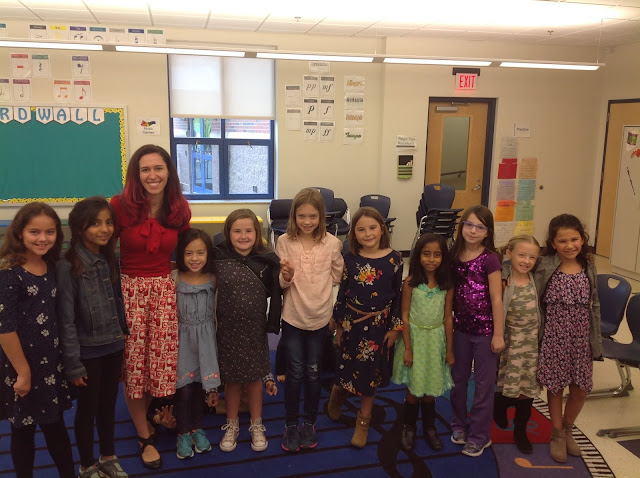 And here is a video I forgot to post last week of the students playing "Tideo."


The fourth grade students worked more on their cup came this week! It was fun to vary the tempo, and try silly things like performing with eyes closed. We will play a bit more next week.

The fifth grade students reviewed last year's cup game, and added another element - singing. The song they paired it with is called "I've Been to Harlem." It is very challenging to sing while doing such a complicated task! Especially since the rhythm of the song is quite different from the rhythm of the cup routine. Next week, they will learn a challenging new cup routine to accompany Edward Grieg's In the Hall of the Mountain King.

In chorus, the students learned how to read a choral score, then started to rehearse their songs for this year's winter concert. Two of our combined songs are Hot Chocolate and First Footsteps. We will continue these next week!

Have a wonderful weekend :)

Fall is just around the corner. Here is what we did in music this week.....

First grade learned their first two solfege tones:  so and mi.  We tossed around a ball to help us practice singing those pitches. When the ball was tossed in the air everyone sang "so," and once it was caught everyone sang "mi."  They also finished their "Lucy Locket" game from last week.  Then we made soup for our home room teachers.  All were chefs and participating in making the soup by adding their own ingredients.  As each child added an ingredient, we performed the "Chop, Chop, Chippety Chop" chant.

Our third grade students had so much fun performing "Tideo" last week that we decided to play the game again. Here is a video and picture of Mrs. Cyr and Mrs. Ferullo's class: 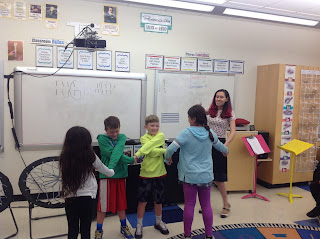 We also finished the  "Thread Follows the Needle" song and activity that they started last week.  The class was lined up in two rows, and each row had a child designated as the needle, a child as the knot, and the rest all held hands to make up the thread!  The needle led the thread in and out (and under the arms of their classmates) to create cross stitches as they sang!  It was so much fun!   In addition, we started to learn an awesome calypso song called "Four White Horses." It is a 3rd grade favorite! Next week we will learn the hand routine.

The fourth and fifth graders both played a stick game using the songs that they learned last week.  The fourth grade sang "Rocky Mountain," and fifth sang "Sansa Kroma." They played a stick passing game and students were eliminated each round until we had a winner!  They had to the stick on a steady even beat. We also extended the game but adding different color sticks to the game. If a student received a red stick, they were out. If they received a green stick, the person to the right of them was out. We had so much fun playing this game!

It was also our first week of chorus. We discussed our theme of Music and Literature and listened to the song to see if we could figure out what book it was from.

We hope you stay warm and happy first day of fall!

Welcome back to school! We made it through our first full week - congratulations to everyone!

The first graders are so excited to have music class this year! We discussed the rules and fun things like BRAVO and Music Superhero. The students also sang or spoke their name as a solo in our "Chicka Chicka Boom Boom" activity and chant! We started another new song this week called "Welcome Back," which helps students explore musical opposites: fast vs. slow, and loud vs. quiet. Then, students learned about "Lucy Locket," and started a new game to practice singing loud and quiet. 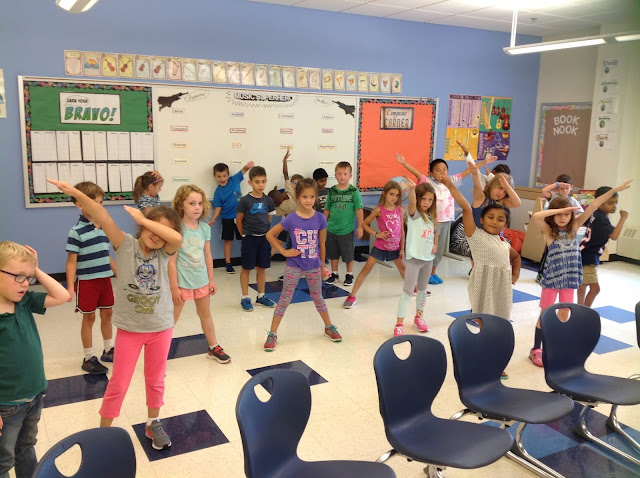 Can you believe that our second grade students were jump roping in music last week and this week? We learned a a fun song called the "Skipping Rope Song." Each round, we sang a different child's name as they jumped over the rope (making sure to stay with the steady, even beat!). During their second music class, they played a fun game called "Grizzly Bear." 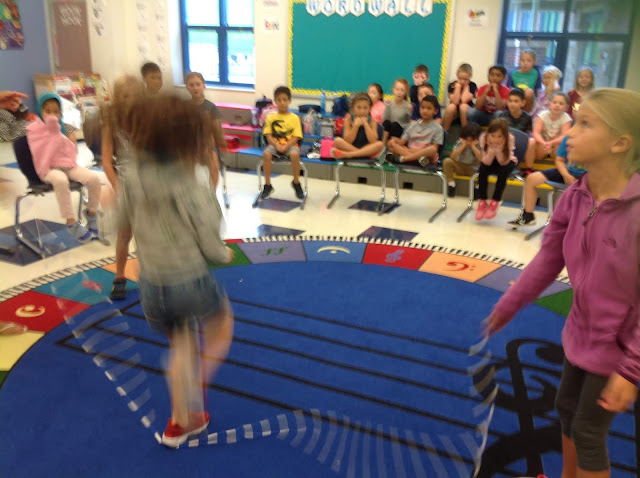 In third grade, the students played along with one of my favorite beginning of the year activities- "Hey Children."  The students learned the song first, followed by a clapping routine.  Once the routine was mastered, the clapping routine was transferred to the rhythm sticks so we could play the name game!  It was a lot of fun. They also started a great circle dance called "Tideo" - we will finish this next week. Lastly, there was some friendly competition between classes as they played Rhythm Telephone. 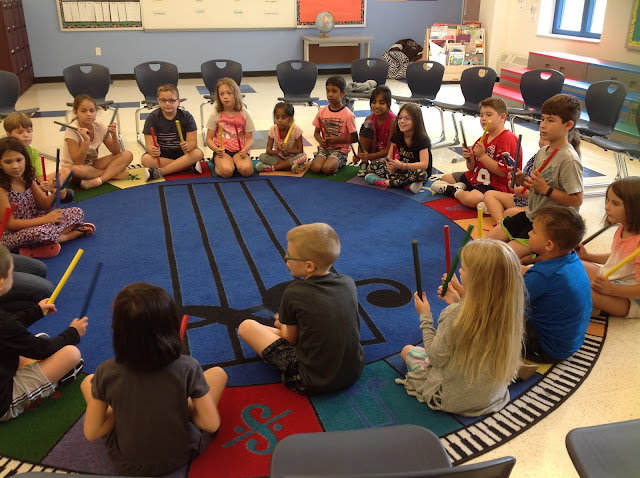 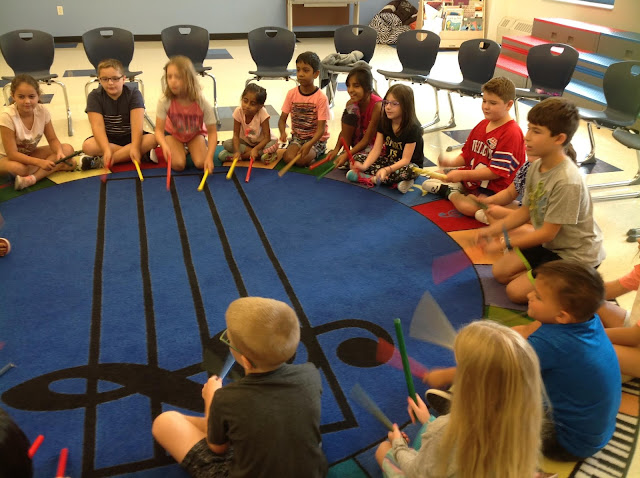 The fourth grade students learned a song called, "Rocky Mountain."  This song explores high and low voices, and was a bit tricky at first!  The song has a hand routine that goes along with it- we did the routine in whole notes (4 beats), half notes (2 beats), quarter notes (1 beat) and eighth notes (1/2 beat). Then, we used hand drums and bongos instead of our laps.  EVERY student had a drum to play! It was fun to play and sing at the same time. After they finished playing the drums, we started a stick passing game to the same song.

In fifth grade, we sang an African song called "Sansa Kroma." Ask your 5th grader about the meaning of the song!  Once we learned all of the words, we did a drumming activity similar to the one the fourth graders did with their song. It was a blast (and quite loud)! They also learned a stick passing game which we will continue next week! 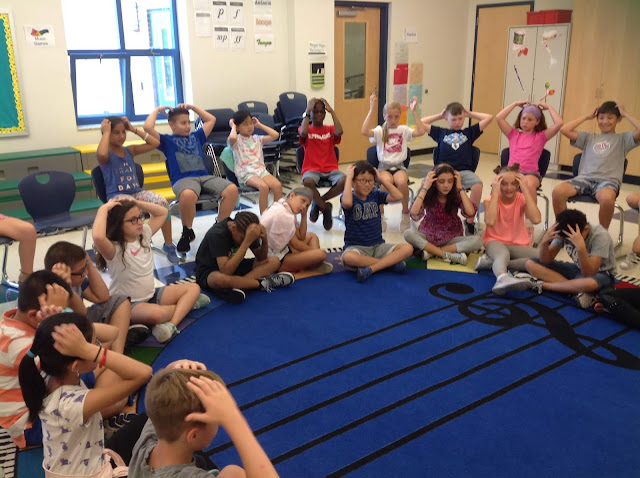 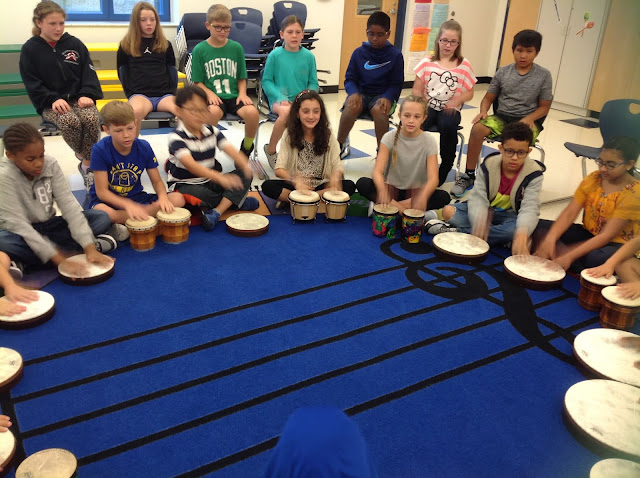