This week the second graders recorded their sound effects to the book "Old Wind." Below you can hear the final results.  Can you guess which instrument was used for each part?

The first grade students learned songs about Autumn and used scarves to move to the tempo of the songs. The students enjoyed using scarves and moved them creatively as they sang Autumn songs. They also learned a new musical term called, "rest" and applied it to a chant "The Black Bat Sat." This chant tested their memory of "ta," "ti-ti-," and "rest." Ask your first grader what these musical terms mean! The students had fun clapping the rhythm to this chant and also got a chance to use rhythm sticks to keep a steady beat.

Second grade had so much fun singing and playing the game "The Funny Little Lady," that we played it again this week.  We also read a book called, "Old Devil's Wind" and used various instruments as sound effects.  We will be recording the narration of this story with all it's sound effects next week so stay tuned!

In third grade, we learned a song called, "Pass the Broomstick." After the students successfully learned the song, we played a fun game. We passed a rhythm stick (which was our broomstick) to a steady beat while we sang the song. Then the student who held the stick on the last beat of the song was out. Their job was to help us keep a beat using a pair of rhythm sticks. We also learned a catchy song called, "Boom, Boom Ain't It Great to Be Crazy?" On the refrain, students played the words, "Boom, Boom" on a xylophone and the word "crazy" on a glockenspiel.

In fourth grade, the students were busy preparing for their Veteran's Day Concert. In class, we learned and memorized, "America the Beautiful" and "A Grateful Nation." The students did a fabulous job with these two songs! In chorus, we learned our last song for the concert called, "Everlasting Fruitcake." We also finished working on the last page of "It's a Candy Cane Kind of Christmas." They worked hard and sang beautifully!

The fifth graders  learned a tone poem set to music by Camille Saint-Saens called, "Danse Macabre." The students listened and analyzed the popular arrangement. Mrs. Rzasa gave us her very own solo performance as we listened to this arrangement. Can you guess which instrument she played? In chorus, we learned our last song for the concert called, "Lots of Latkes" and finished "Hot Chocolate." They worked hard and sang so beautifully!

Have a wonderful weekend and hope you all stay safe during Hurricane Sandy!
Posted by ANiu at 2:03 PM No comments:


In music this week, all of our students experienced playing at least one Orff instrument.  Carl Orff believed that, "A successful and fun experience is the basis for a positive learning process." Thus, he
designed a learning approach which uses tone bar instruments. These instruments include the bass, alto and soprano xylophones, metallophones, and soprano and alto glockenspiels. The students learned the difference between a xylophone, metallophone, and a glockenspiel. They also learned the mallets that are appropriate for each of these instruments and how to hold the mallets properly. Here is a picture of how our music classroom was set up with our third grade students: 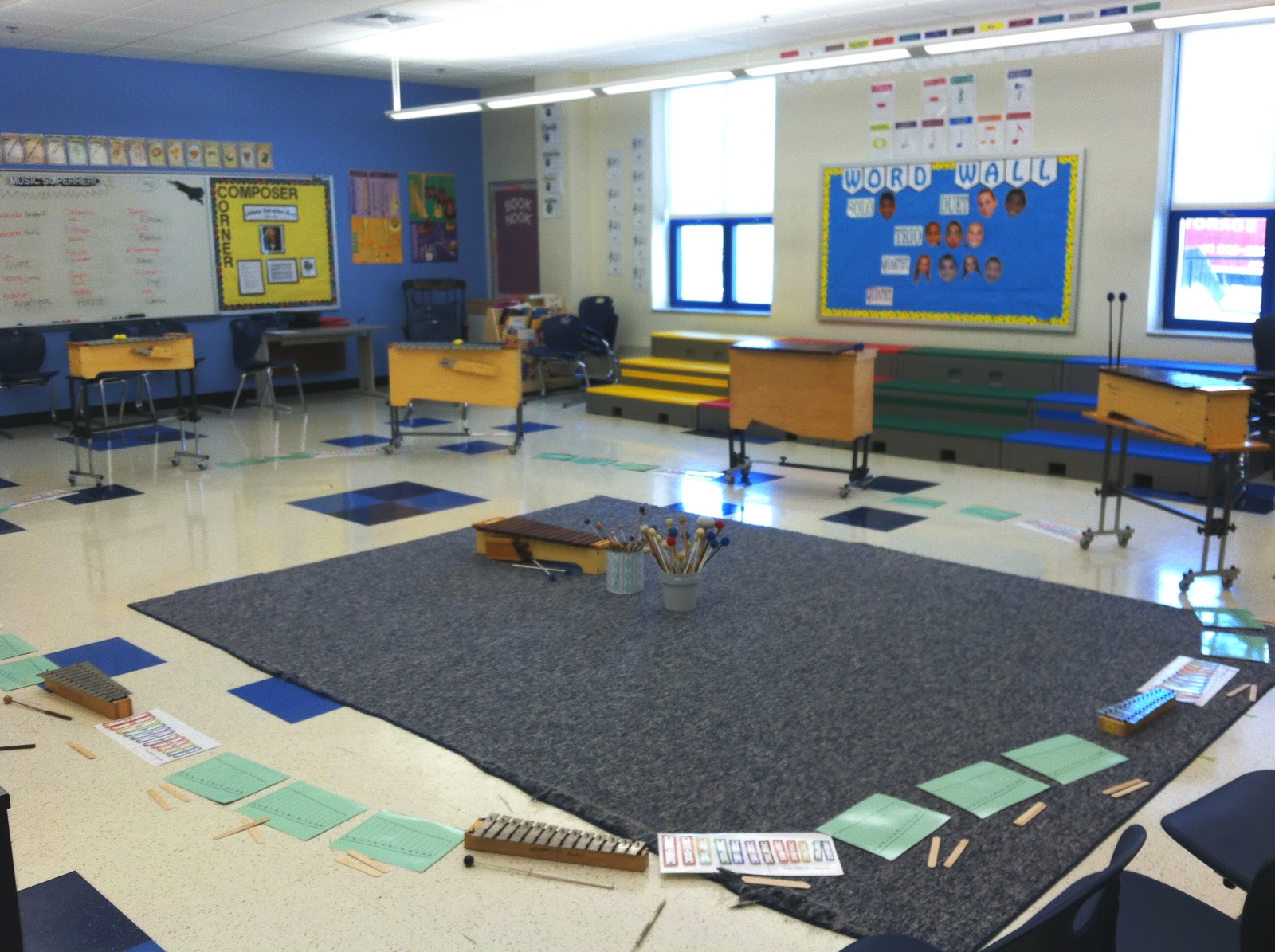 The first grade students learned a song called, "5 Little Pumpkins" that introduced music contour, or the direction the notes moves in. Some of the students played one of the Orff instruments. Can you guess which one? Our first graders learned a new music term called, "crescendo" and applied it to a fun song called, "Thump, Thump, Thump!" Students got a chance to either play an egg shaker, a hand drum, or a triangle to accompany the song.

Second grade students continued "Bony Legs" and used a guiro and xylophone to accompany the song.  They also learned a cute song called, "The Funny Little Lady." After the students successfully learned the song, they played a game where one student closed their eyes and sat in front of an imaginary door. Their job was to guess who the soloist was when a particular part of the song was sung. It was such a fun game that we will have to finish this game next week! They also created their own class brew by adding their own silly ingredient and sang, "Witches' Brew." These second graders are so creative! 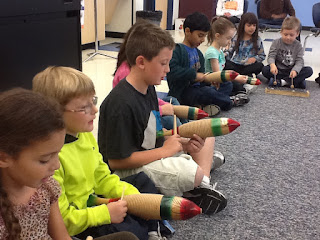 In third grade, students had so much fun with, "9 Lives" last week that we continued to use the Orff instruments to accompany the song. Every child experienced playing a xylophone, metallophone, and a glockenspiel. They also played 5 notes ascending, beginning with the note D.  We also sung the scale in minor.

In fourth grade, the students got a very thorough lesson on how to play the Orff instruments and how to properly hold the mallets. They practiced playing an Orff instrument with the song, "Sounds of the Night Air." In chorus, we revisited the song "It's a Candy Cane Kind of Christmas." The students remembered so much of this song and sang it very well! We also continued to learn "The Christmas Song." For such a hard choral song with many chromatic passages, the students did a fabulous job!

The fifth graders continued to learn the xylophone accompaniment to the song, "Halloween Night."  In chorus we worked on "Food Glorious Food" and revisited "Hot Chocolate." The concert is coming up in December so please remind your child that all the music and lyric is now posted in the "Chorus" tab. We can't wait for you to see and hear the songs that they have be working on!

The music room is in need of tissues, and we would love it if you could donate a box.  Thanks! 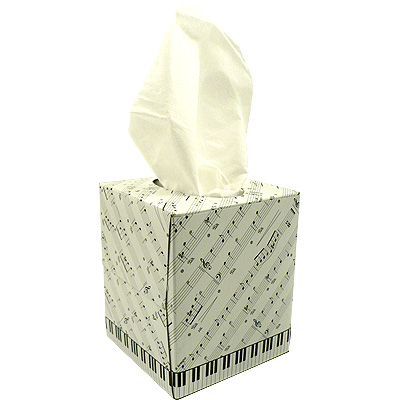 This week might have been short with the holiday on Monday, but it was a good one!

The first grade students learned some very important music words:  piano (quiet), forte (loud), crescendo (gradually getting louder), and decrescendo (gradually getting quieter).  We put these concepts to the test with a fun call and response song called "The Bats Are All Asleep."  The first graders enjoyed pretending to be spooky for a movement game while singing "Ghost of John."  We also looked for Dracula, exploring beat and mood with this fun chant.

Second grade students continued Conversational Solfege, with a focus on our new rhythm syllables.  We learned a great song called "Bony Legs" and sang it at special times during the Bony Legs story.  When the story was over, we added the guiro and xylophone to the song!  Each instrument played an ostinato (a part that gets repeated over and over).

This is a guiro

In third grade this week we finished our Ding Dong Diggidiggi Dong song, playing the guiro (see above) on the sixteenth notes, the drum on the eighth notes, and the triangle on the quarter notes.  We also talked about minor, and practiced our scales starting on la:

We also sang our solos in minor!  The song "9 Lives" is sung in minor- we used our solfege to sing it, then added the words.  We also played the xylophone, glockenspiel, and metallophone to accompany the singing!

In fourth grade, the students sang the partner songs "Black and Gold" and "Trick or Treat."  They sounded SO cool when sung at the same time!  We also started to learn "America the Beautiful," which will be sung at the Veteran's Day Assembly!  In chorus on Friday we had a special guest- our piano accompanist, Mrs. Parry, played piano while we sang!  We worked on finishing "Food Glorious Food" and continued to work on "The Christmas Song."  It was beautiful!

The fifth graders learned a song called "Halloween Night," which reinforced minor singing.  This song includes xylophone accompaniment, and we will be finishing the activity next week!  n chorus on Friday we had a special guest- our piano accompanist, Mrs. Parry, played piano while we sang!  We worked on finishing "Food Glorious Food" and continued to work on "The Christmas Song."  It was beautiful!

Can you believe it is October already?

First grade students learned about steady beat. Whether music is fast or slow, it has a continuous pulse.  We walked to the steady beat of a hand drum and tapped a steady beat on various parts of our body to John Sousa's songs. We learned the chant, "I Think Music is Neat,"and a Halloween song, "Have You Seen the Ghost of John."

The second graders learned about Johann Sebastian Bach. Ask your child to give you one fact about this famous composer! Mrs. Rzasa is working towards her Masters degree and is doing a project on John Feieraband's Conversational Solfege. It is a pedagogical method that develops musical literacy.  Ask your student what doo and doo-day means!

Fourth graders continued to create a rhythm stick accompaniment part to play along with the response for the song "Chicka Hanka"   In chorus the students finished learning "Food Glorious Food." They are singing the important harmony part that makes the melody beautiful! We also began, "The Christmas Song" or better known as, "Chestnuts Roasting on an Open Fire."

The fifth graders reviewed all the line and space notes on the grand staff. We learned a song called, "I Don't Know the Notes" to help us remember the names of the notes. Ask your fifth grader to sing the refrain part to you! We also played fun note games; Park It, Bean Bag Toss, and Ready, Get Set, Notate It! In chorus, we finished learning, "Food Glorious Food" and began the first few pages of , "The Christmas Song" or better known as, "Chestnuts Roasting on an Open Fire."

Have a fabulous THREE day weekend!
Posted by ANiu at 6:21 PM No comments: