This week, the first graders worked on the sign language for "Over the River." We did it while singing, and then again while audiating (singing in our heads).  They also practiced other songs that they have been learning since September, to prepare for their performance in December!  Parents of first graders: information will be going home soon :)

The second grade students talked about Thanksgiving, and had the opportunity to share different ways their families celebrate. They then added a percussion accompaniment to their "Five Fat Turkeys" song from last week. Some students played on the xylophones, some played the metallophones, and some used the glockenspiels.  They learned two different ostinato patterns, which they played while the rest of the group sang. During their second music class, the students played "Turkey Tango, a game which helps to reinforce rhythmic reading.


The third graders learned about verse and refrain form while singing a hilarious song called "The Turkey Shot Out of the Oven"(to the tune of "My Bonnie Lies Over the Ocean").  There are 5 verses in this song, and each was assigned to a different group of students. Some groups performed this week, and others will perform next week!

The fourth and fifth graders have been working hard to prepare for their winter concert on December 13th. Some of them auditioned for special parts, including solos, dances, and instruments.  Now that they have learned all of the music, it is time to start memorizing!

We hope you had an amazing weekend!
Posted by Mrs. Rzasa at 7:53 PM No comments:

Email ThisBlogThis!Share to TwitterShare to FacebookShare to Pinterest
Labels: 2nd grade, class of 2021


Although we had a short week in school this week, three days of school did not stop us from having fun in music!

Congratulations to all our 4th grade students who sang so beautifully at our Veteran's Day Assembly!

Here are some videos from that day:


Our first graders learned a Thanksgiving song called, " Hello Mr. Turkey How Are You?" Every time we sang the phrase, "Hello Mr. Turkey," we had to find a new friend in the room to shake hands with. It was also fun to gobble and wobble like a turkey. We also learned a song called, "Over the River and Through the Woods." It is also a children's classic which we read in class.  Next week, we will learn the song in sign language.

The second grade students are also starting to learn music for Thanksgiving.  We sang about "Five Fat Turkeys" and how they were scared of the cook that was looking for them! We added two spoken ostinato parts- "Cook- Cook" and "Five Fat Turkeys." Next week we will use Orff instruments to play the ostinato parts.

Third grade students performed a tango to the song, "Turkey Tango." A tango is a partner dance that originated in Argentina and Uraguay.  We played a game where students had to pass a ball around while the song was playing. When the music stops, whoever has the ball gets to pick a feather from one of the turkeys. There was a rhythm turkey and a dare turkey, where students had to act what was written on the feather. It was so much fun!

The fourth graders also learned about African drumming.  We taught them a drumming pattern from the Ewe, a group of people in Ghana and a few other African countries.  Once they learned the drumming pattern, we practiced it on our classroom jug drums and tubanos while we sang "Sing Noel."

Fifth graders were at Bourndale this week. We hope you all had fun there and we can't wait to hear about your experiences on Monday.

Have a wonderful weekend. Thank you to all the Veterans out there for serving our country!
Posted by Mrs. Niu & Mrs. Rzasa at 8:32 PM No comments:

Email ThisBlogThis!Share to TwitterShare to FacebookShare to Pinterest
Labels: 4th grade, class of 2019

For those who celebrate, we hope you had a wonderful and safe Halloween!

This week, the first graders learned another song about bats called "Flap and Fly." Once they knew the song, we played a game to accompany it. Bats are nocturnal mammals, meaning that they sleep in the daytime and are awake at night.  We started the game with the lights on, then a student (the Sun) turned off the lights so the bats could dance and sing!  When the sun came up, the lights were turned back on and the bats fell asleep.  The students even decorated their own bats to use during the game.  The first graders also learned two more fun songs, called "Skin and Bones" and "Ghost of John." 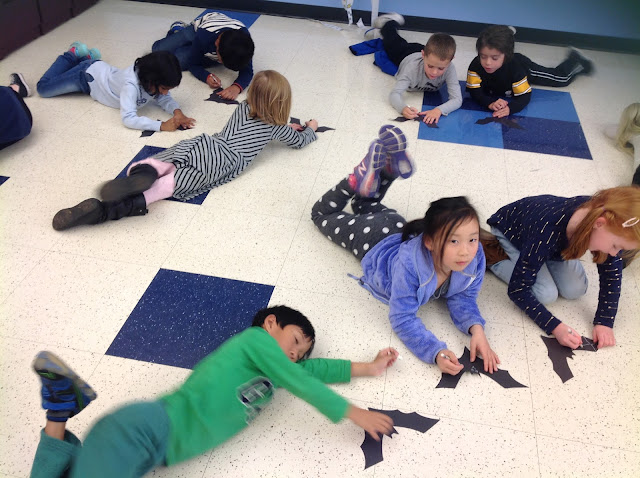 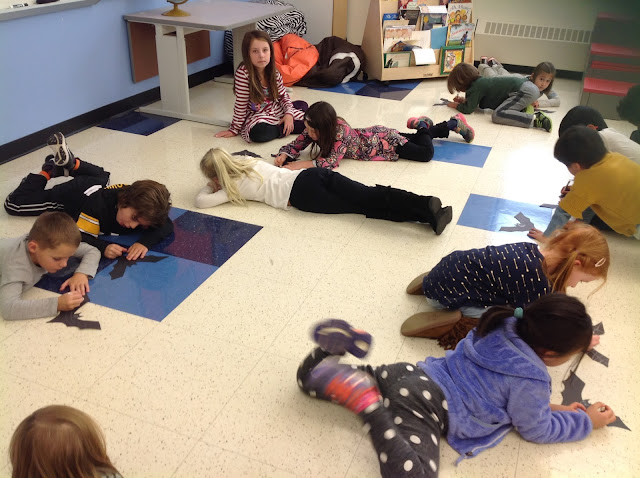 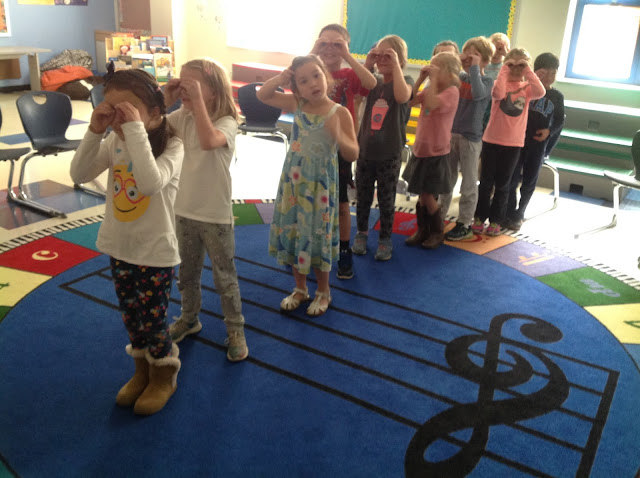 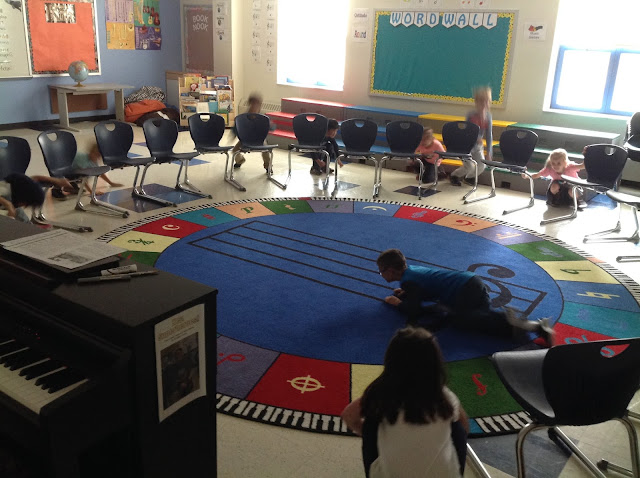 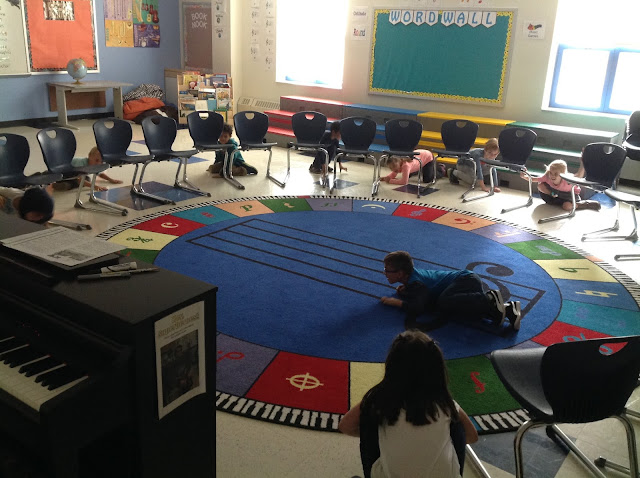 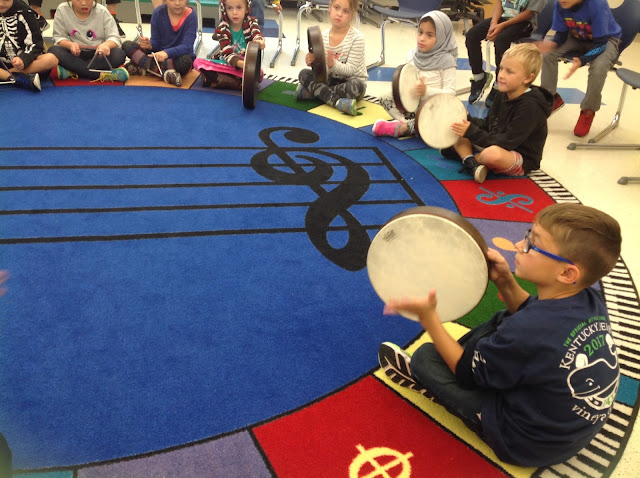 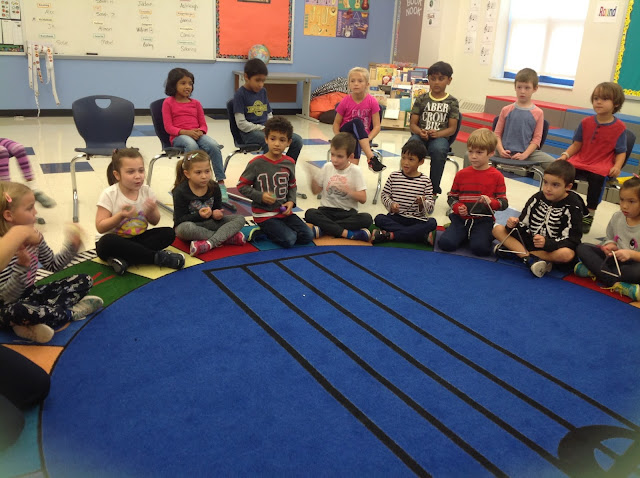 The second grade students read a book called "Old Wind." Then, they used various percussion instruments (as well as their voices!) as sound effects.  It was so much fun to add the instruments and vocal sounds to make the book sound even cooler!  We recorded the students' performances, and uploaded them to THIS blog post.  For their second music class, the students learned a song called "Bony Legs." It is part of a Russian folk story and was so much fun to sing!

The third graders learned a passing game called "Pass the Broomstick."  They started by singing the song (in minor tonality), then learned how to pass a rhythm stick along to the steady beat.  On the last beat of the song, whoever has the red stick is out!  Friends who were eliminated were able to play the egg shakers with the beat and sing along.

Fourth graders have finished preparing for the Veteran's Day Assembly.  The assembly is this Monday, November 6th at 1:30 p.m.  Due to space limitations, ONLY the parents of fourth graders may attend.  Thank you!

The fifth graders learned a great rhythm game called "Rhythm Spots." Four different colors were assigned to a different rhythmic value (blue = quarter rest, green = quarter note, yellow = eighth note, red = sixteenth note).  We then had students walk along to the steady beat while listening to "In the Hall of the Mountain King," and when they got to a spot they had to perform four beats of that rhythm before walking away to a different spot.  The tempo steadily increases in that piece of music, so they had to listen carefully to keep up with the beat!

The fifth graders also learned about African drumming.  We taught them a drumming pattern from the Ewe, a group of people in Ghana and a few other African countries.  The Ewe people use vocalizations for drumming, where the voice imitates the sounds of the drum.  These vocal syllables are their form of spoken notation, since music is not written down like it is in other parts of the world.

Once they learned the drumming pattern, we practiced it on our classroom jug drums and tubanos while we sang "Sing Noel." 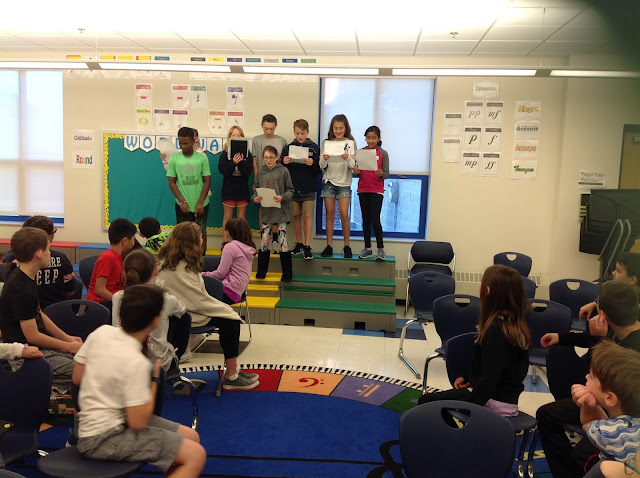 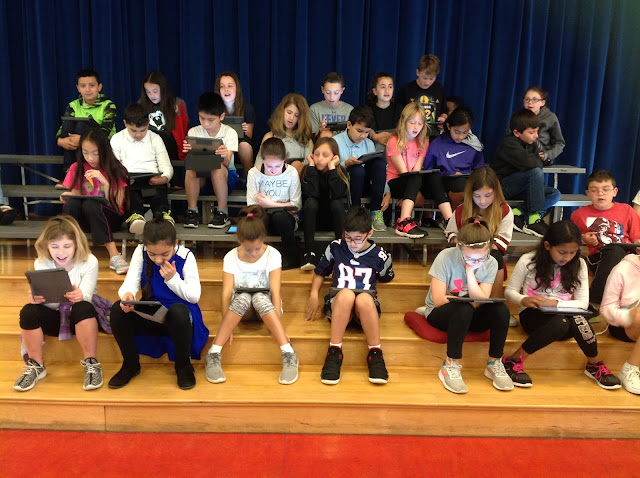 Have a wonderful weekend!
Posted by Mrs. Rzasa at 10:15 AM No comments:

This week, the second grade students read a story called "Old Wind."  There are many different characters in the story, and each was represented by a different instrument.  The students played the hand drum, sand blocks, ratchet, vibraslap, whip, glockenspiel, chimes, or made sound effects with their voices!

Check out their videos:

(Unfortunately, the next video is cut short - I ran out of recording space on my iPad!)