The first grade students have been learning all about musical form, and this week they finished the unit by performing short pieces they composed in ABA Form. Check them out below!

Email ThisBlogThis!Share to TwitterShare to FacebookShare to Pinterest
Labels: 1st grade, class of 2023

This week in music, the first graders took their ABA compositions and selected hand percussion instruments to perform with.  Each group decided how they wanted to structure the composition.  Since they must follow the form, here are the choices:

The second graders have also been performing. They completed their lyrics for their class compositions - some of them were sweet, and some were just plain funny! All of the students did a fantastic job singing their words along with the tune.

They also listened to Mrs. Niu playing a gentle lullaby after a tiring field trip and pretended to take a nap :) 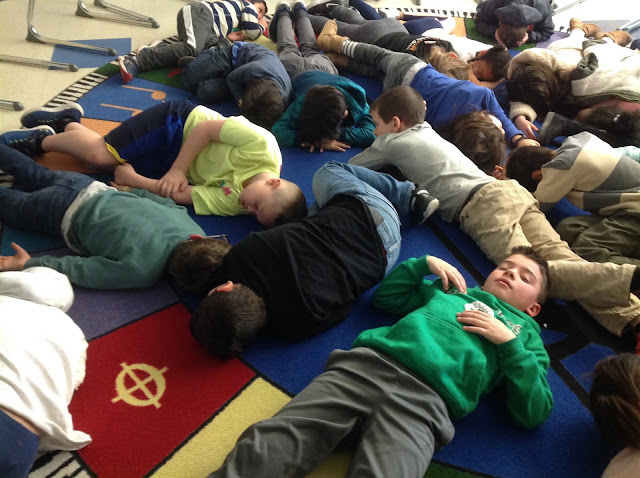 The third graders had so much fun in their new centers this week, which included a musical card game similar to Uno, and Music Jenga! In their other music class, the students learned how to play the F#, and then we went through Twinkle, Twinkle Little Star. Some students also used their new F# note to figure out how to play Hot Cross Buns in a different key! So cool!

The fourth and fifth graders started a new composition project this week. The fifth grade students read Where the Wild Things Are and the fourth graders read The Adventures of Beekle. Then, we discussed how adding music would make the story more interesting.  What kind of music would work for each part of the story?  Which instruments would be most appropriate to get the perfect sound?  Next week, they will experiment in small groups and compose a short piece to ago along with their assigned part of the story.

We hope you have a great weekend!

Email ThisBlogThis!Share to TwitterShare to FacebookShare to Pinterest
Labels: 2nd grade, class of 2022

First graders composed an ABA form composition.  Working with their peers, students composed an 8 beat "A" section, and an 8 beat "B" section using quarter notes, eighth note, and quarter rests. During their second music class, students selected hand percussion instruments to perform with.  Each group decided how they wanted to structure the composition.  Since they must follow the form, here are the choices:


Next week they will play them for the class and we will definitely post them on the blog.

The second grade students have also been working on a class composition.  Each class worked together as a team to write a two measure song, and the students (working in pairs) have been writing lyrics.  We discussed the importance of matching up the syllables with the rhythm - each note must be paired with only one syllable.  They have done an amazing job, and we can't wait to share them with you next week!

Third grade students learned low D and low E this week. Since the purple belt song, "Old MacDonald " is a challenging song, we went over the song again and practiced play a G to a low E.

Our fourth grade students continued to rehearse for All Town Chorus and finished "Bridge to Athlone" folk dance. Here are some pictures of the students having fun performing the dance: 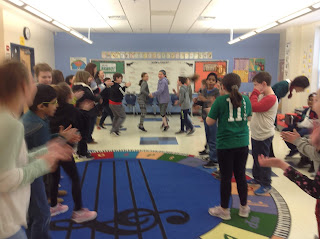 Our fifth grade students learned a new folk dance called, "The Boston Tea Party."It is a challenging dance based on the Boston Tea Party that took place in 1773. Next week we will finish learning the dance steps. We learned the rest of the All Town Chorus songs.

Our fourth and fifth grade students have two main events coming up:

More information regarding call times and dress attire will follow.

We hope you have a fabulous weekend. Yay! Spring is finally here!

This week in music, the first graders learned about a brand new instrument - the glockenspiel! To celebrate St. Patrick's Day, the students also learned a song about a leprechaun.  They then played a game that included a hand drum as well as a glissando on the glockenspiel. We also reviewed the different rhythms in both duple and triple meter.  This will help us when we start our composing projects next week! 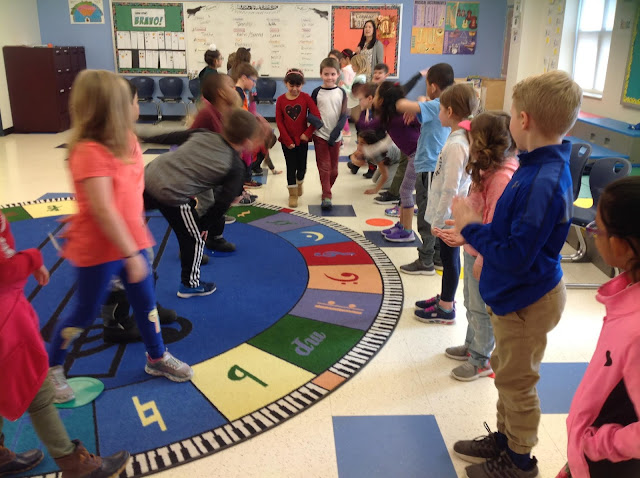 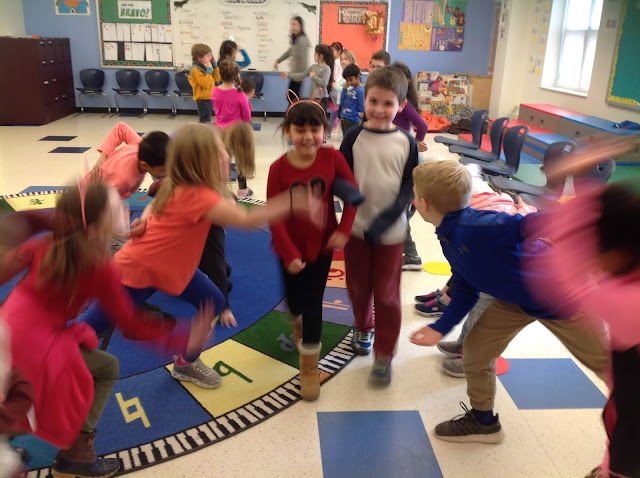 The second grade students enjoyed learning two different folk dances, the Chimes of Dunkirk and Kings and Queens. The two dances share some similarities including sashay, and moves that go with 8 counts. However, in Kings and Queens the lead pair gets to pretend they are royalty! Everyone else in their kingdom must bow as they pass. It was so much fun!

The third graders continued their centers from last week. Don't forget to ask your child to play for you at home! Casual "performances" will help improve their confidence on the recorder. They also learned a new note - low D, which will be used on "Old MacDonald!"

The fourth and fifth graders continued their folk dances from last week and had a blast! Then, they rehearsed some of the songs for their All-Town Concert. We sent home a flyer with the dates, and another will go home soon with information regarding what to wear and call times. In chorus, they worked on their grade level songs and "Stories of My Life."
Posted by Mrs. Rzasa at 9:17 AM No comments:

Email ThisBlogThis!Share to TwitterShare to FacebookShare to Pinterest
Labels: 1st grade, class of 2023

March Madness in music began with folk dancing in every grade, except of our 3rd grade students who are working so hard on their recorders. With St. Patrick's day around the corner, we thought dancing would be a great activity.


Our first grade students continued playing the game, "Walk to the House." I must admit, I am quite amazed that these first graders know the names of so many percussion instruments. We also learned a folk dance called, "Chimes of Dunkirk." It's a song from France. We found where France was on the globe and learned the history of the song. Here are our first grade students performing this dance:


Our second grade students had so much fun performing the "Irish Washerwoman" dance that they created their own version of the dance in small groups.

The third graders have been doing an amazing job on their recorders and in the recorder centers!  Many of them have started the green belt (Lucy Locket), so we are now working on low E.  Just as a reminder, if you need extra help or would like to get tested on your next belt song, Mrs. Niu will be available on Tuesdays from 8;10am-8:30am and Mrs. Rzasa will be available on Thursdays from 8:10am-8:30am.

The fourth graders started a new folk dance called "Bridge of Athlone."  They first found Ireland on the map, then talked about the history of that famous bridge.  Here is a video of our fourth graders performing the dance:


Our fifth graders had so much fun with the "Bridge of Athlone "that they performed it again this year. Here is a picture of the students: 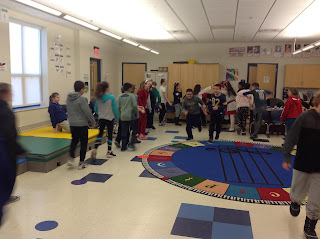 In chorus, we began learning our final song for the concert, "Stories of My Life." This song celebrates the role of literature in our lives by naming twenty favorite children's books.

Don't forget that students don't have school on Monday. Have a wonderful weekend!

Email ThisBlogThis!Share to TwitterShare to FacebookShare to Pinterest
Labels: class of 2019, class of 2022

Congratulations to the String Students!

Wednesday night was the second annual All-Town String performance and the students did an amazing job! We had 3rd graders up through to 9th graders who all came together for an evening of beautiful music. Here are some photos of our 4th and 5th grade Memorial students prior to the concert: 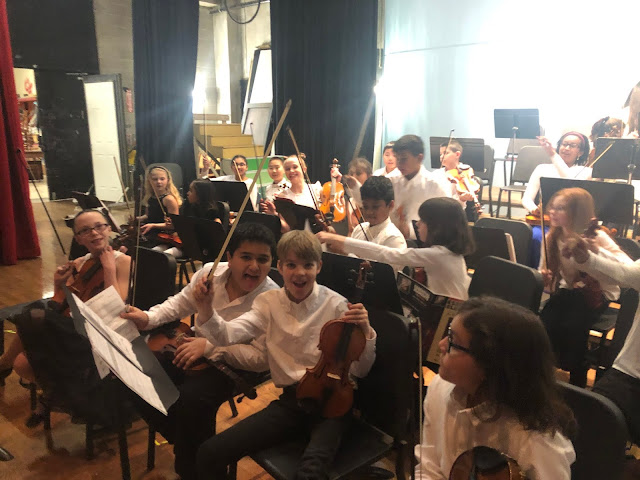 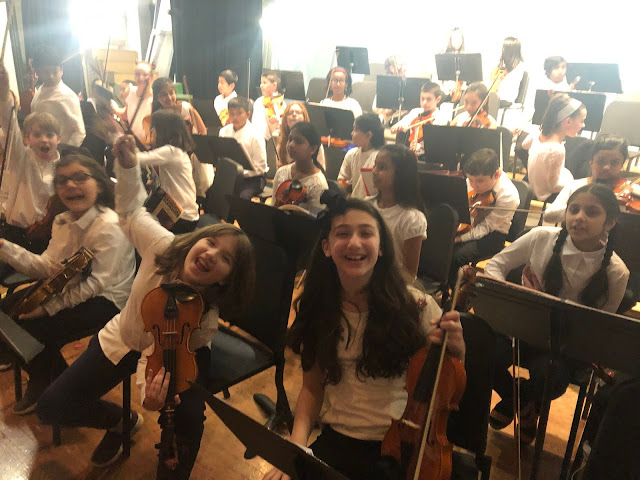 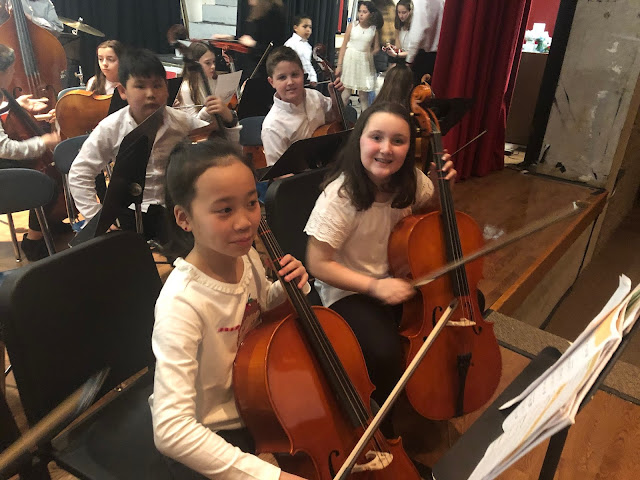 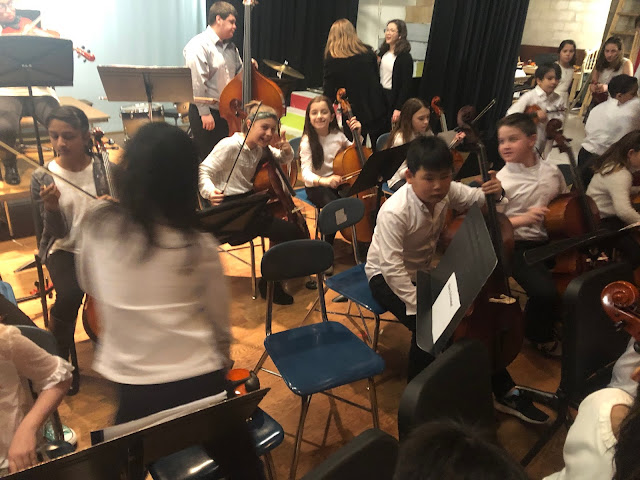 The band had their All-Town concert last night, and they also did an amazing job. Congratulations!

This week in music, the first graders enjoyed learning about our classroom hand percussion instruments.  They can now identify and play the following instruments:

To put these new skills to the test, we learned a song called "Walk to the House." Two students secretly select a hand percussion instrument and play it during the appropriate part of the song. The rest of the class must listen carefully while they sing and then identify the instruments that were played. The students who guess correctly become the percussionists for the next round! 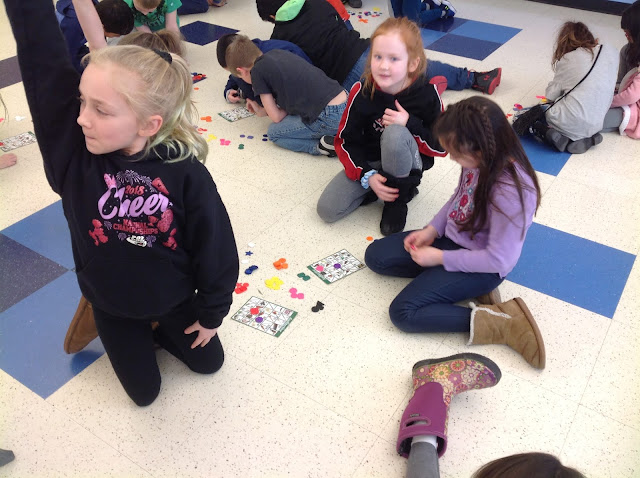 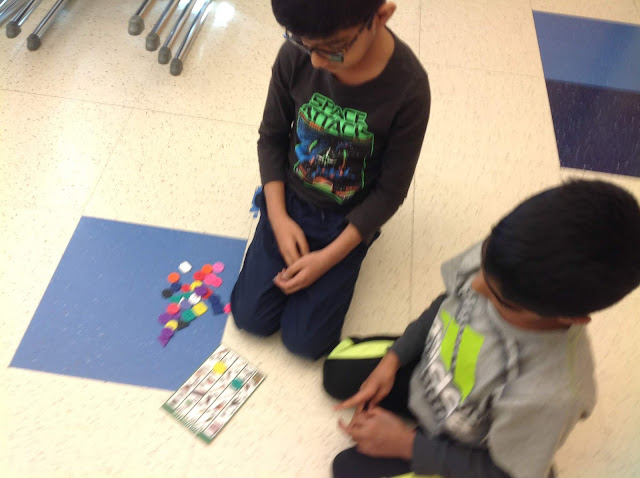 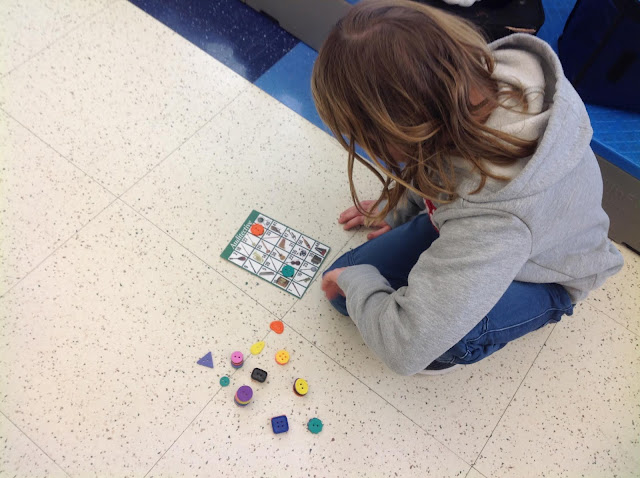 The third graders are continuing to work on their recorder skills. They are doing an amazing job! All of the third grade students have passed the white belt- we are so proud of them!  Some students are still working on the yellow belt song (Merrily We Roll Along), and others are up to the orange (Gently Sleep)! They also tested their note reading by playing an awesome game called Staff Wars! You can purchase and download the app HERE.

In fourth and fifth grade, the students finished their ukulele unit! Don't worry, we will be using them again later in the school year. We reviewed the chords they have learned so far: C, G, F, and A minor. Then, we found some ukulele play alongs on YouTube for some of their favorite songs. It was so much fun!

Unfortunately, we didn't have chorus this week due to the delay yesterday, DARE this morning for 5th grade, and Dr. Seuss read-along for 4th grade.

Have a wonderful weekend, and stay safe in the snow!
Posted by Mrs. Rzasa at 10:07 AM No comments: