We can't believe it is already November. Here is what we did in music this week......


In first grade, students added three percussions instrument to the song,"Thump, Thump, Thump."  A hand drum was played during the crescendo on the words, "Thump, Thump, Thump," a triangle was played on a quarter rest, and egg shakers were played on the spooky words, "Who's There?" Every student got a chance to play all three instruments.   We also learned a song and played a game called, "Flap and Fly." Bats are nocturnal, mammals meaning that they sleep in the daytime and are awake at night.  Bats were asleep while the lights were on, then a student (the Sun) turned off the lights so the bats could dance and sing!  When the sun came up, the lights were turned back on and the bats fell asleep. Here is Mrs. Burnham's class performing, "Thump, Thump, Thump!" 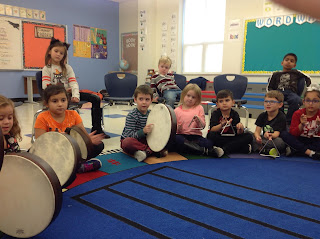 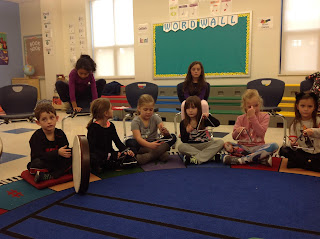 The second graders had so much fun playing "A Funny Little Lady" that we played it again this week.  We read a book, "Old Wind," and used various percussion instruments to create sound effects.  Here are the performances:

In third grade, the students repeated their "Funeral March of a Marionette" activity from last week and played a game called, "Pass the Broomstick" that reinforces steady beat. The song is in minor to prepare for this, they sang a minor scale. Rhythm sticks were given to each student to represent broomsticks. Then they learned how to pass a rhythm stick along to the steady beat.  On the last beat of the song, whoever had one more more sticks were out.

Fourth graders have finished preparing for the Veteran's Day Assembly.  The assembly is this Thursday, November 8th at 1:30 p.m.  Due to space limitations, ONLY the parents of fourth graders may attend.  As a reminder, if you would like your child to be dismissed with you, they must send in a note that day. The front office is VERY strict about this policy. Thank you in advance!

The fifth graders really enjoyed a unique listening activity this week.  They followed a listening map for "Danse Macabre" by Camille Saint-Saens.   It's based off of a poem by Henri Cazalis and features a violin soloist.  Mrs. Rzasa played some of the themes on my violin so they could find them as we listened to the song.

Have a wonderful LONG weekend with your children!