This week, the first graders learned a chant called "I Think Music's Neat." Learning this chant  has helped the students realize that the number of beats in a song or chant stays the same- even if you perform it with a different tempo! We also learned a song about a nocturnal animal called, "The Bats Are All Asleep."  The teacher sings (using a crescendo), then the students respond (with a decrescendo).

Second graders learned a challenging new song called, "Come and Follow Me."  Each phrase is sung a little bit higher than the last.  Once the students were comfortable with the song, we added the body percussion!  It takes a lot of coordination to get the hang of, but we worked on it slowly and patiently. The students have done a wonderful job!  We also watched a short film about the life of Ludwig von Beethoven. Ask your child about this particular composer!

The fourth graders started learning a new folk dance called "Bridge of Athlone."  They first found Ireland on the map, then talked about the history of that famous bridge. 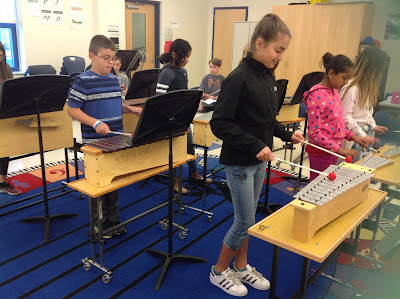 Enjoy the gorgeous weather and have a fabulous weekend!

Email ThisBlogThis!Share to TwitterShare to FacebookShare to Pinterest
Labels: 5th grade, class of 2018