This week, the first graders finished their Peter and the Wolf unit by playing Peter and the Wolf Jeopardy! The questions ranged in difficulty based on their point value, and categories included Instruments, Characters, Facts, and more! They really enjoyed reviewing the story/music with some friendly competition.

In second grade, students tested their abilities to recognize and reinforce the sounds of instruments by playing Instrument Bingo.  Students were given bingo cards with different instruments from the woodwind, brass, percussion and string families.  When a recording of an instrument was played,  they had to identify the instrument and see if it was on their card. If it was, it got marked with a button. Once the students had 5 buttons in a row on their card, they had BINGO and won a musical prize!

The third graders have been continuing their recorder unit, and have even earned some Recorder Karate belts! One class each week is their centers day, which includes the following centers:


At the testing center, the students get to work one on one with the teacher to practice or test for their next belt song. Once they pass a song they get a belt (colored band) to add to their recorder, AND they sign the poster on the bulletin board in the hallway!  During their other class, the students learn new notes and reinforce their notation/reading skills. Please encourage your child to practice at home!

The fourth graders continued their ukulele unit, reinforcing the C, G, F, and A minor chords. Next week will be their last week, although we hope to grab the instruments again later on this spring! Some of the students also played a fun game of Musical Twister to reinforce staff notation. It's important to brush up on "old" skills so that they don't forget them! 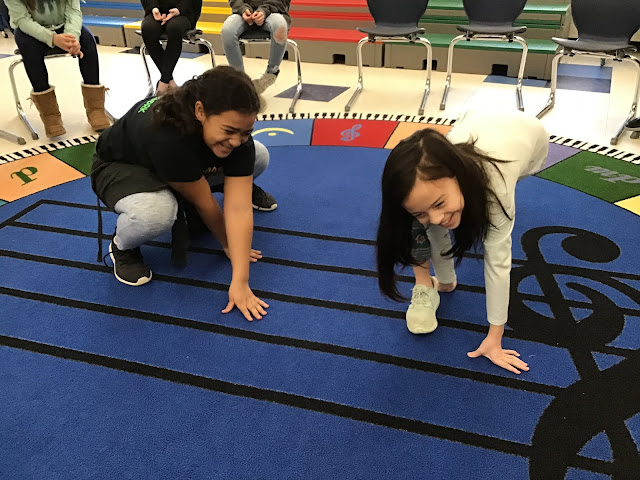 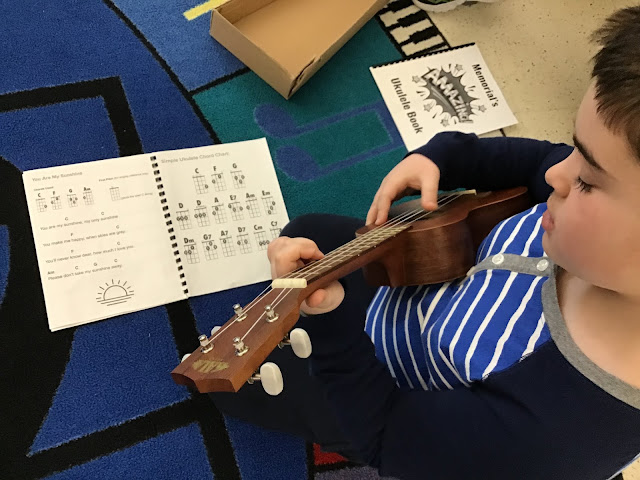 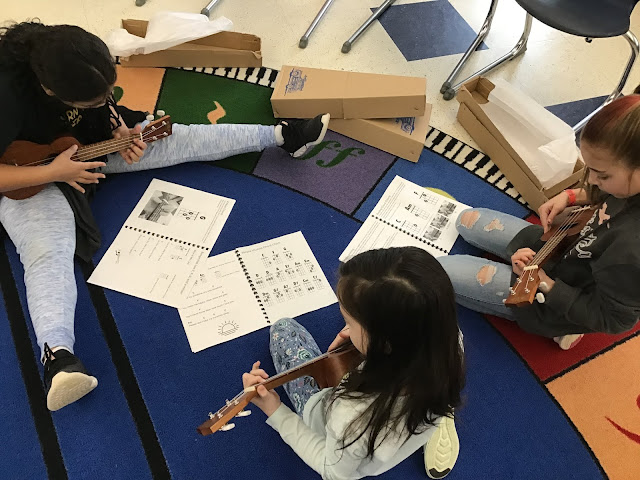 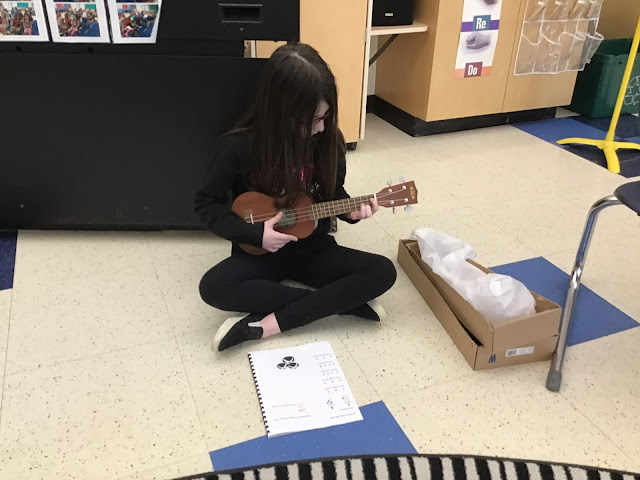 The fifth graders finished their ukulele unit, and are looking forward to starting a composing unit next week! The students will be able to use any of our classroom instruments (including the ukulele!), as well as their orchestra/band instrument or any that they may have at home. We can't wait to hear their creative compositions!

It's the week before February break and we accomplished so much in music this week!


Our first grade students celebrated Valentine's Day by learning a fun song called, "Tony Chestnut." This song involved pointing to various parts of our body and using sign language for a few words. After we learned the song, we sang it in different tempos- slow, medium and fast.  We also learned a fun dance called, "Heel, Toe, on the Line."  There were two words that the students did not recognize- "Ja" and "Nein." These words mean "Yes" and "No" in German. Each student dances with a partner in a circle and on the word "Nein," the partners turns their back against each other and ends up with a new partner. It was so much fun! 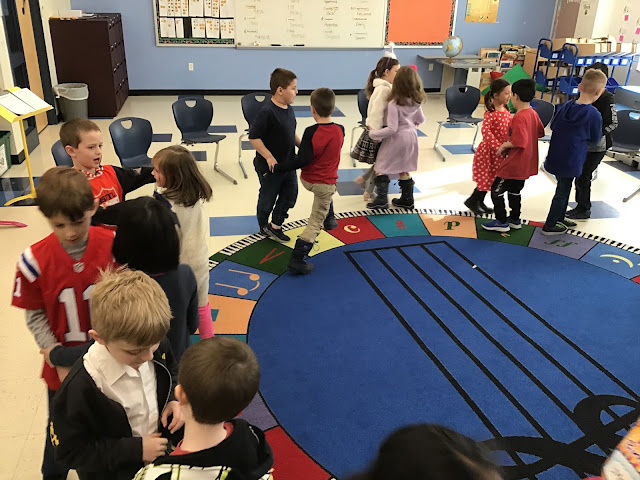 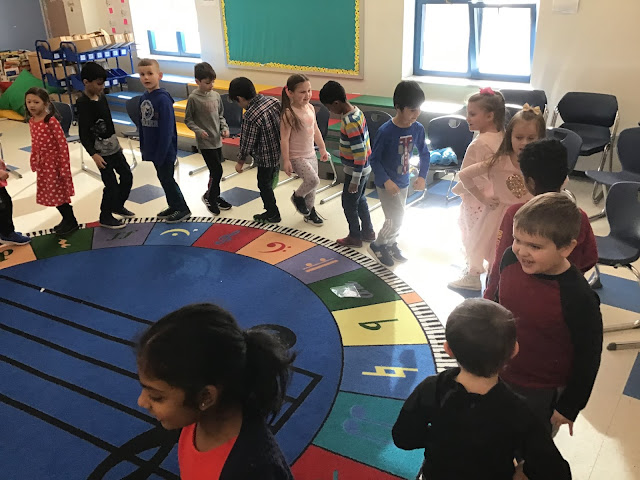 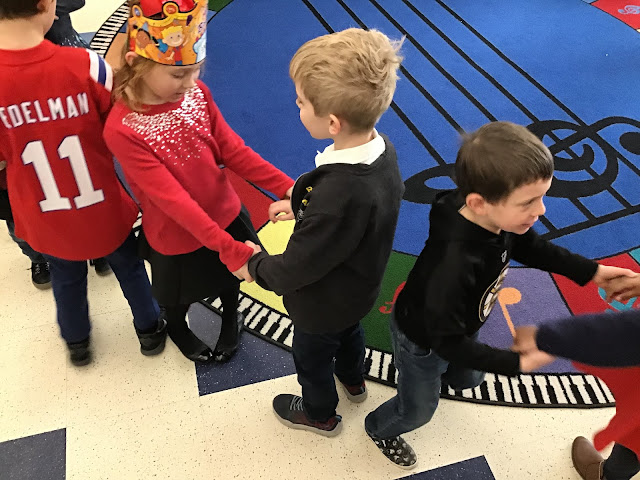 The second graders finished the Young Person's Guide to the Orchestra activity and are experts to the four instrument families. Feel free to name an instrument and see if you child can guess correctly which family that instrument belongs too. Next week, we will test their knowledge of instruments further by playing, "Instrument Bingo."

Some of our Third grade students had the opportunity to test for their white belt song and they did very well. Your students should know the notes B, A and G.

Here are a few important things to keep in mind:


Our fourth and fifth grade students are continuing to learn the Ukulele. This week, they mastered the notes C, F, Am and G by playing familiar folk songs. Students were asked to partner up with another student to help each other. Here are some pictures of our students having fun! 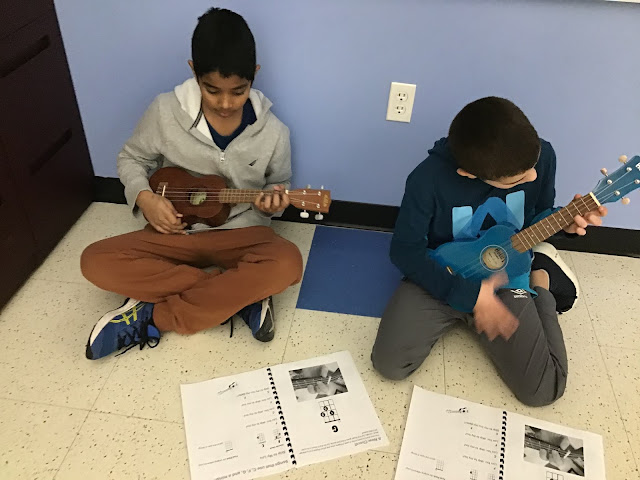 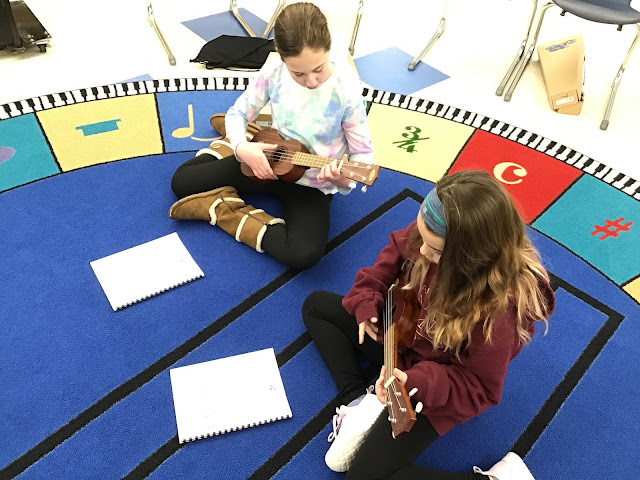 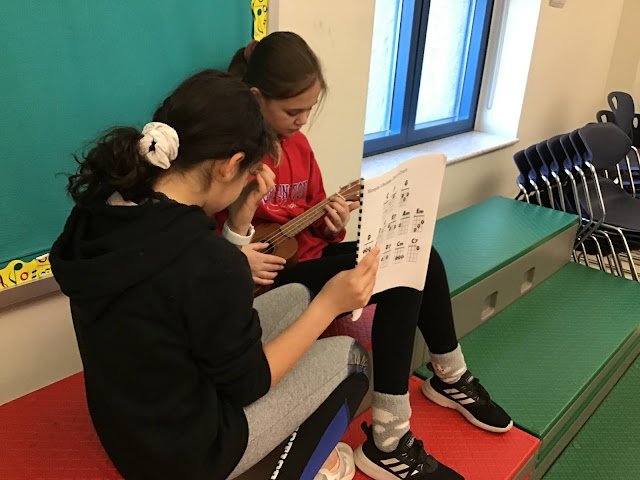 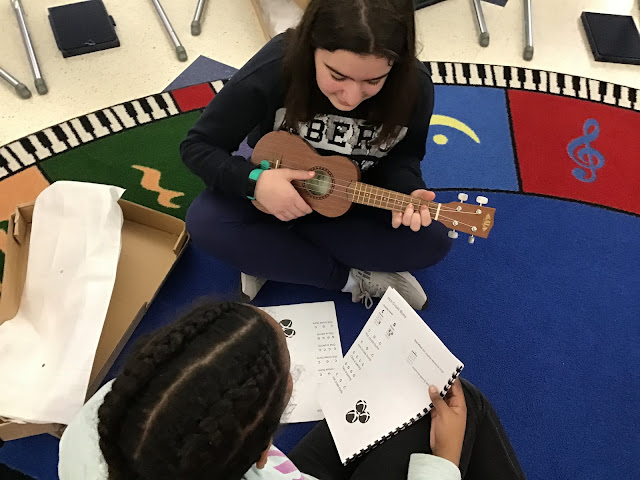 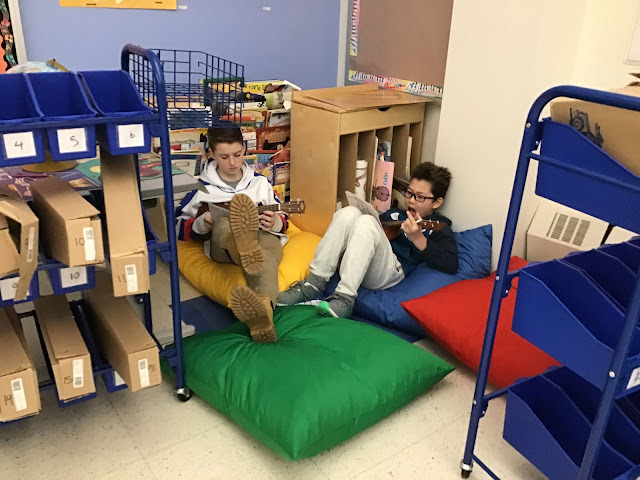 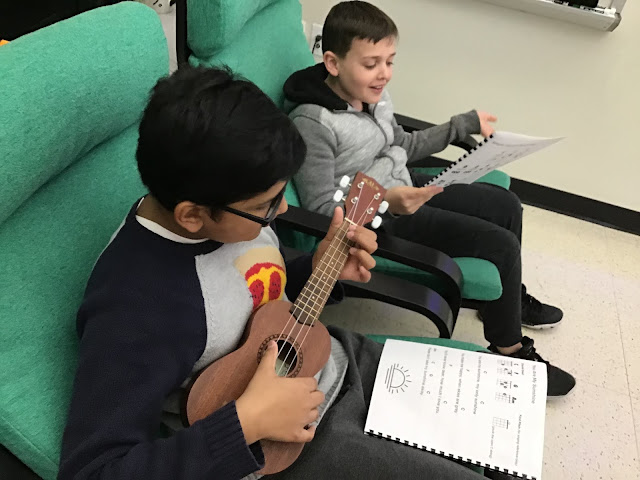 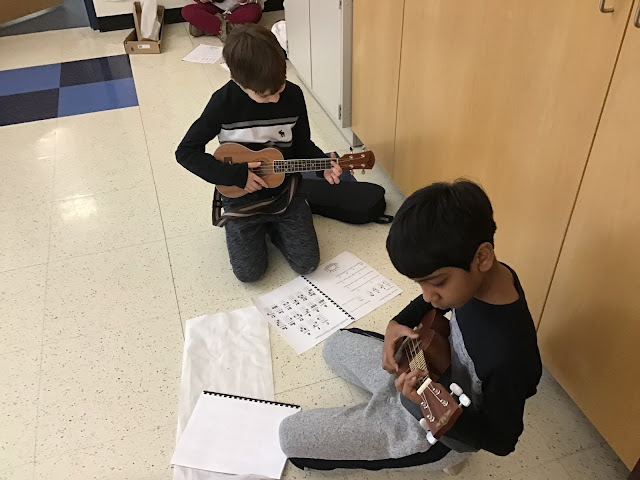 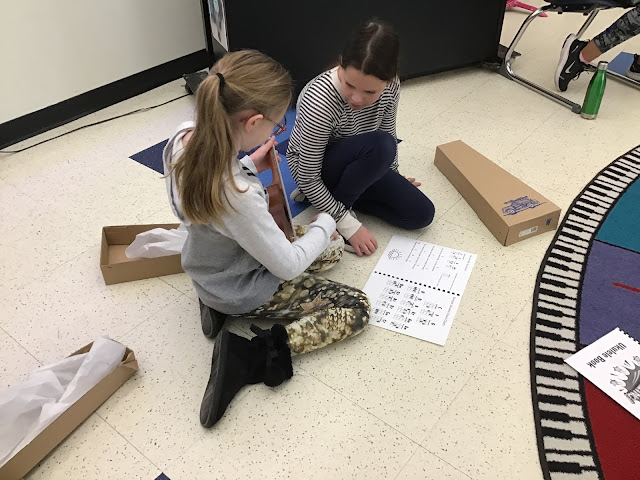 We hope you all have a fun and relaxing week with your family!

This week in music, the first graders finished up their Peter and the Wolf listening maps! It was so much fun to learn about all of the instrument themes for the different characters. We started to watch the Peter and the Wolf movie, which we will finish next week! They also learned a song for a holiday we had last week - Groundhog's Day.  The song is called "Time to Wake Up Sleepy Groundhog," and it includes a really fun circle game!

The second grade students continued the Young Person's Guide to the Orchestra interactive game.  They traveled through the safari to the string family, and some classes even continued on to the Brass family! Some of the students also enjoyed dancing to a piece of classical music by Austrian composer Haydn - the Surprise Symphony! Others had fun moving to Freight Train. 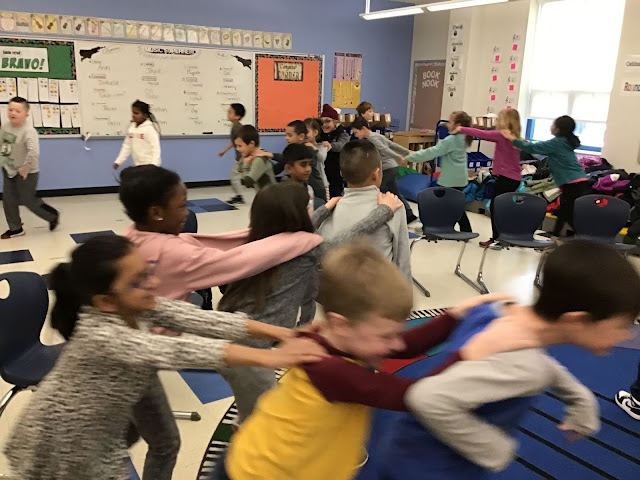 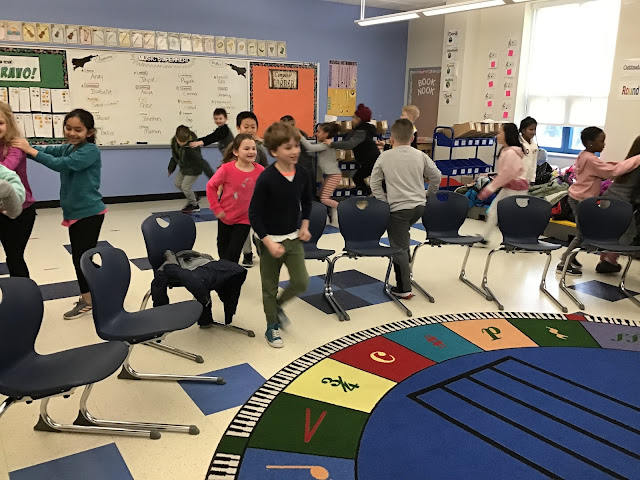 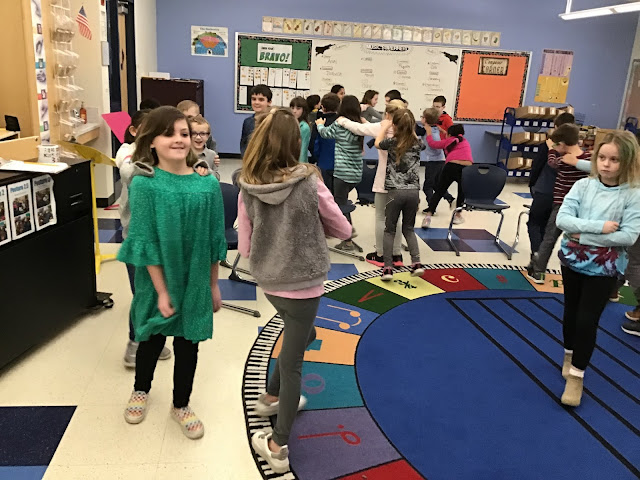 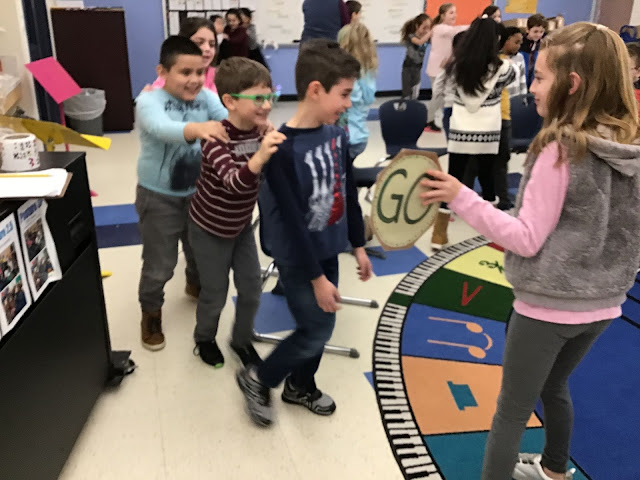 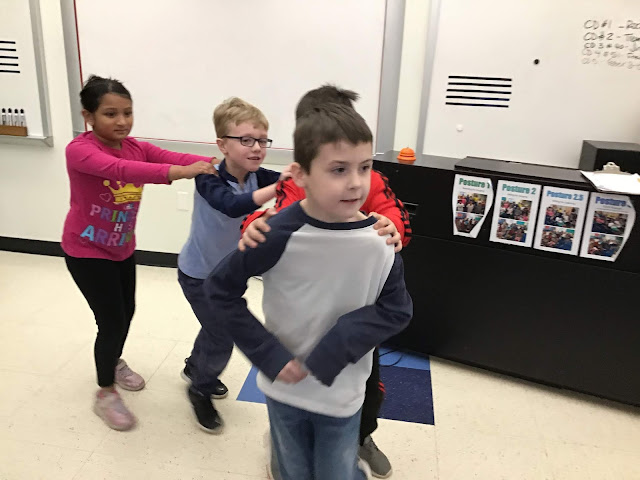 The third graders took their notation test this week.  We are so proud of the students for all of their hard work - they did a wonderful job! They also received their recorders so we can start this new and exciting unit! Please remind your child to bring in their recorder and folder on music days from now until the end of the year.

The fourth and fifth graders continued their ukulele unit. They are getting really good at their G, F, a minor, and G chords. Then, they played a few different songs on the instruments.

In chorus, the students continued We Can Plant a Forest and their grade level song. They will start a new song next week!

Hope you have an amazing weekend!
Posted by Mrs. Rzasa at 11:11 AM 9 comments: